There are over 13,000 islands in the 5200-kilometre-long archipelago of Indonesia. With so many to choose from, we’ve whittled it down to 20 of our favourites from the Rough Guide to Southeast Asia on a Budget:

With its pounding surf, emerald-green rice terraces and exceptionally artistic culture, the small volcanic island of Bali – population 3.1 million and the only Hindu society in Southeast Asia – has long been Indonesia’s premier tourist destination. Although it suffers the predictable problems of congestion and commercialization, Bali’s original charm is still much in evidence, its distinctive temples and elaborate festivals set off by the mountainous, river-rich landscape of the interior.

Thirty-five kilometres east of Bali at its closest point, Islamic Lombok (80km by 70km) is populated by Sasak people. It differs considerably from its Hindu neighbour, with lots of wide-open spaces and unspoilt beaches, and much less traffic and pollution. Tourist facilities are less widespread and public transport sparser. The island’s northern area is dominated by the awesome bulk of Gunung Rinjani, and trekking at least part of the way up is the reason many tourists come to Lombok. Most base themselves in the nearby villages of Senaru or Sembalun Lawang. Other visitors enjoy the cool foothills at tiny Tetebatu and Sapit. The other big draw is the beaches.

This is the most tranquil island of the three Gili Islands, with a small local population, no nightlife and arguably the best beaches, as less space is taken up by fishing boats and hawkers (although unfortunately the few hawkers there are here are even more persistent than most). It takes a couple of hours to stroll around the island. There’s a bird park in the middle of the island (Taman Burung) that’s worth a visit; it houses three hundred tropical birds. The snorkelling is good along the east coast; start at Royal Reef and drift down to Kontiki in the south. Take care – there may well be boats coming in and out to the harbour along here. 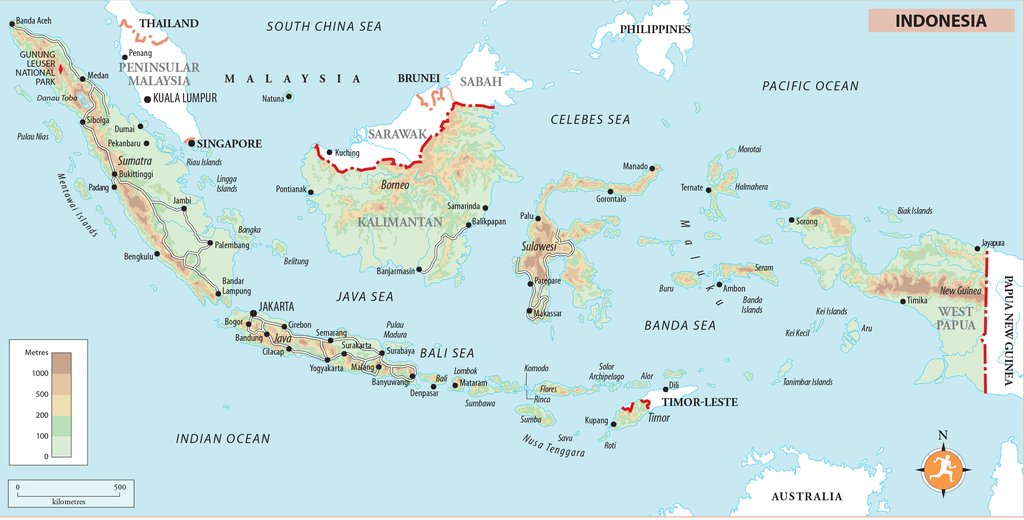 Furthest from the mainland, the largest of the islands, Gili Trawangan attracts the greatest number of visitors (many of whom come for the magic mushrooms for which the island is infamous) and is the most developed. The southeast of the island is wall-to-wall guesthouses, restaurants and dive shops, although it is still low-key and relaxing outside the high season. For quieter surroundings, head further north.

The enticing rainforest-clad Mentawai Islands, 100km off the west Sumatran coast, are home to an ethnic group who are struggling to retain their identity in the modern world. There are over forty islands in the chain, of which the four main ones are Pulaus Siberut, Sipora, North Pagi and South Pagi. Only Pulau Siberut, the largest, at 110km long by 50km wide, is accessible to tourists (overnight ferry from Padang); all visitors must be registered by the authorities. The islanders’ traditional culture is based on communal dwelling in longhouses (uma) and subsistence agriculture, their religious beliefs centring on the importance of coexisting with the invisible spirits that inhabit the world. With the advent of Christian missionaries and the colonial administration in the early twentieth century, many of the islanders’ religious practices were banned, but plenty of beliefs and rituals have survived and some villages have built new uma (shrines). However, the islanders are still under threat, not least from an Indonesian government seeking to integrate them into mainstream life.

A fertile, mountainous barrier between the Savu and Flores seas, Flores comprises one of the most alluring landscapes in the archipelago. The volcanic spine of the island soars to 2500m, and torrential wet seasons result in a lushness that marks Flores apart from its scorched neighbours. It also differs religiously – 95 percent of islanders are Catholic. The most spectacular sight in Flores is magnificent Kelimutu, near Moni, northeast of Ende. The three craters of this extinct volcano each contain a lake of different, vibrant and gradually changing colours. In the east of Flores, high-quality ikat weaving still thrives. At the extreme west end of the island, Labuanbajo has some fine coral gardens and is also the port for ferries to and from Sumbawa.

Southeast across the Badung Strait, encircled by a mixture of white-sand beaches and mangrove, the tiny island of Nusa lembongan (4km by 3km) is an ideal escape from the bustle of the south. Seaweed farming is the major occupation here, supplemented by tourist income from surfers, snorkellers, divers and anyone seeking attractive beaches, a bit of gentle exploring and an addictive somnolent atmosphere.

Most travellers crossing the scorched, mountainous island of Sumbawa, east of Lombok, experience it solely through the window of a long-distance bus. But transit travel doesn’t do justice to this friendly, laidback island, with its fine beaches and surfing, offshore islands and traditional villages. Sumbawa has gained a reputation for offering some of the finest surfing in Indonesia, without the crowds you’ll find in Bali. Getting to the beaches with a surfboard can be an arduous task unless you charter a car from Sumbawa Besar, but once there you’ll find plenty of accommodation and facilities. The main breaks are at Hu’u, off Lakey beach, and around Maluk beach on the west coast.

Off the east coast of Sumbawa lies Komodo National Park, a group of parched but majestic islands, home to the Komodo dragon, or ora as it is known locally, which lives nowhere else. The south coast of the main island is lined with impressive, mostly dormant volcanoes, the north with mainly dusty plains, irrigated to create rice paddies around the major settlements. Although the practice of feeding live goats to the dragons stopped a long time ago, you may still feel as if you’ve stepped straight into Jurassic Park if your visit coincides with big tour groups.

Sumatra offers a breath of fresh air for those travellers looking to escape the chaos of Java. An explorer’s paradise, the vast majority of the island remains undiscovered. Most of the highlights are in the north at places like Bukit Lawang, a jungle-shrouded river offering the best chance in Indonesia to see orang-utans in the wild; Danau Toba, Southeast Asia’s largest lake and a magical place to lose a few days and relax in one of the numerous waterside resorts on the island of Samosir; and the stunning crater lake of Danau Maninjau.

Sulawesi sprawls in the centre of the Indonesian archipelago, a tortuous outline resembling a one-thousand–kilometre letter “K”, and one of the country’s most compelling regions. Nowhere in Sulawesi is much more than 100km from the sea, though an almost complete covering of mountains isolates its four separate peninsulas from one another and from the outside world. Invaders were hard pushed to colonize beyond the coast, and a unique blend of cultures and habitats developed. The south is split between the highland Torajans and the lowland Bugis, there are various isolated tribes in the central highlands, and the Filipino-descended Minahasans reside in the far north

Dense tropical jungle, murky village-lined rivers teeming with traffic and with wildlife so abundant it becomes the norm, Kalimantan is a jungle-cloaked landmass that appeals to those looking to venture into undiscovered territory. Occupying the southern two-thirds of the island of Borneo, Kalimantan remains largely untouched by tourism. With few roads, the interior’s great rivers are its highways and a trip up one of them will give you a taste of traditional Dayak life and introduce you to lush areas of dense jungle. More intrepid explorers can spend weeks on end navigating their way through seldom-ventured parts, and a visit to one of the national parks could bring you face-to-face with wild orang-utans. The provincial capitals of Pontianak, Palangkaraya and Samarinda are sprawling, dusty towns which offer little aside from their services. However, once out of the crowded, populated areas Kalimantan’s character starts to unfold.

The Togian Islands form a fragmented, 120-kilometre-long crescent across the shallow blue waters of Tomini Bay, their steep grey sides weathered into sharp ridges capped by coconut palms and hardwoods. The exceptional snorkelling and diving around the islands features turtles, sharks, octopus, garden eels, and a mixed bag of reef and pelagic fish species. From west to east, Batu Daka, Togian and Talata Koh are the Togians’ three main islands, with Walea Kodi and Walea Bahi further east. The main settlements are Bomba and Wakai on Batu Daka, and Katupat on Togian. Wakai is something of a regional hub, with transport out to smaller islands. There are no vehicle roads or widespread electricity in the Togians and you’ll find it pays not to be on too tight a schedule; most accommodation places offer day-trips and shared transfers.

Sumba is a land of contrasts. The east of the island is made up of arid grasslands and limestone plateaux, while the west is fertile and green, with rolling hills and a long rainy season. Waingapu, the capital, is well known for producing the finest ikat fabric in Indonesia. A little further out at Rende and Melolo sit stone tombs with bizarre carvings, and in other villages on the east coast you’ll find quality weaving, traditional structures and deserted beaches. The main town in the west is Waikabubak, where characteristic houses with thatched roofs soar to an apex over 15m above the ground.

Explore more of this stunning continent with the

Rough Guide to Southeast Asia on a Budget

for your trip, and don't forget to

Your travel guide to Indonesia

Ready to travel and discover Indonesia?
Get support from our local experts for
stress-free planning & worry-free travels