The best time to visit Jordan is, to some degree, dependent on what you’re looking for. If you plan to make the most of the scorching sun by lounging on a Red Sea beach or by a hotel pool then summer might work best for you.

When is the best time to visit Jordan?

If, however, you’re bent on exploring Jordan’s beguiling cities, walking around ancient ruins or even getting stuck into a view-laden hike, then it would be wise to visit Jordan in its cooler months around spring and autumn.

For those looking to make the most of the country by travelling the length of it, spring (March to May) is widely considered to be the best time of year to visit Jordan. It’s when temperatures are toasty, but not scorching, wildflowers are out everywhere (even the desert is covered with them, and the hills and valleys running down the centre of the country are lush and colourful.

The worst of the rain is over by March, though it doesn’t entirely peter out in northern Amman Dropdown content and its surrounding hills until late April. Humidity is pleasant everywhere, and low, clear sunlight draws a spectacular kaleidoscope of colour and texture from the desert rocks.

There’s only one drawback – a desert wind, loaded with dust and grit, which blows regularly each spring or early summer out of the Arabian interior. This is known across the Middle East as the khamseen (“fifty”), after the fifty days it traditionally persists (although in Jordan it rarely lasts longer than a few days), and can darken the sky and raise the temperature by 10°C, coating everyone and everything in a layer of sand.

Jordan is a year-round destination – but despite its small size, you’ll find wide variations in climate, often reliant on the topography: Amman, Petra Dropdown content and Wadi Rum Dropdown content all lie well over 800m above sea level, Dana and Ajloun are even higher (up to 1500m), whereas the Dead Sea Dropdown content lies 400m below sea level. This means that deciding on when to go to Jordan depends on where you’re intending to visit.

For example, Amman, Petra and Wadi Rum all lie well over 800m above sea level, Dana and Ajloun are even higher (up to 1500m). The Dead Sea, on the other hand, lies 400m below sea level. The same January day could have you throwing snowballs in Ajloun or topping up your tan on Red Sea beaches.

Jordan is 90% covered by desert and so summers are red hot. The beaches of Aqaba and the Dead Sea, for example, can reach 40°C in the month of July. It’s worth remembering that the nights are cold, though – the sands of Wadi Rum can drop to 4°C in winter, for example.

By contrast, the north west is relatively green and so unsurprisingly receives Jordan’s highest annual rainfall, with peaks in January of 69mm. It, along with Petra (at 1,100m elevation), are among the coolest parts of Jordan.

When is the best month to visit Jordan?

Assuming that you’re keen to travel around a little, the best month to visit Jordan is either in April or May. Most of the rain has cleared up and temperatures haven’t yet hit the sizzling highs of the summer, which have been known to hit 45°C.

It’s a particularly good time for hikers to go to Jordan too, as wild flowers are in bloom in the country’s lush valleys and rolling hills. It’s worth remembering that evenings remain cool, though, particularly in the north west around Amman.

When to visit Jordan in winter

In winter (roughly Dec to Feb), Amman can be desperately chilly, with biting winds sweeping through the valleys, rain showers and even snowfall, although the sun is still never far away.

With short days and freezing nights, Petra winters can be taxing; exceptional lows of -8°C have been recorded.

Wadi Rum is more temperate, but Aqaba Dropdown content makes a fine retreat, with sunshine and warmth even in the depths of January (average Red Sea and Dead Sea water temperatures vary little either side of a balmy 24°C all year).

Visiting Jordan in December to February

It might be mid winter, but for some this can be the best time to visit Jordan. For instance, southern Aqaba on the northern shores of the Red Sea, is warm (up to 23°C) with plenty of sunshine and a pleasant water temperature for comfortable beach-focused holidays.

Amman and Petra, with their higher elevation, are less hospitable, with snow not uncommon in the former. It’s the choppy winds that people comment on the most, so if you’re planning a trip, be sure to dress appropriately.

When to visit Jordan in spring

Spring time in Jordan spans March until the end of May. Temperature wise, it’s thought of as the best time to visit Jordan, owing to agreeable temperatures, and as such is Jordan’s high season. Be sure to reserve rooms ahead of time in touristy areas.

If you’re keen to avoid the rains, it’s best to visit Jordan in late April or May, but be mindful that things start to hot up around then, particularly around the Dead Sea and Aqaba in the south.

May, however, is the best time of year to visit Petra. Rainfall is low at 4mm and temperatures very rarely get any higher than 30°C.

March marks the beginning of spring in Jordan, when the cold winds and rain of winter are beginning to subside and wild flowers take bloom across the north of the country Dropdown content.

There is still rainfall across Jordan in March but showers tend to be short and sharp. Hikers start to make an appearance around this time of year, particularly in the hills around the Dead Sea and in Jordan’s nature reserves.

When to visit Jordan in summer

In summer (roughly June to Sept), Amman can sizzle – up to 40°C in the city centre – though it’s a dry heat, rarely uncomfortable, and the hills catch some cooler breezes.

Temperatures at the Dead Sea and Aqaba have been known to top 45°C, with Aqaba in particular suffering from an intolerable hot wind that makes you feel like you’re basting in a fan-assisted oven.

High, hazy light flattens the brown landscape and bleaches any beauty out of the desert. Copy the locals and treat the hours between noon and 3pm as a time to snooze in the cool indoors. One disadvantage of summer travel is that it’s peak season for tourism from the Gulf countries.

Visiting Jordan in June to August

You won’t very often here people saying that the best time to go to Jordan is between June and August. That’s because it’s hot – really hot. Particularly around the Dead Sea where the mercury rises to a balmy 40°C in August.

That said, the heat is dry, therefore rarely uncomfortable, and the hills can enjoy refreshing breezes. At the height of summer you’ll also receive a wondrous 13 hours of sunshine. Despite the heat, summer is when the bulk of Jordan’s festivals are held. The Jerash Festival for Culture and Art is well worth a visit. It takes place in Jerash Dropdown content in July, focusing on Jordanian dance and music.

Besides the weather, it’s worth remembering that the hajj will take place in July for the next three years. While the pilgrimage is bound for Mecca in Saudia Arabia, many connecting flights come through Jordan and so planes are block booked. Book well in advance.

When to visit Jordan in autumn

Typical autumn weather (mid-Sept to mid-Nov) mostly passes Jordan by, with only a few weeks marking the shift out of high summer. But if you catch it, this can be a lovely time to visit. The first rains fall in early or mid-October, making the parched countryside bloom again and temperatures drop to more manageable levels.

Visiting Jordan in September to November

Everyone is pleased at the arrival of autumn in September as temperatures finally start to cool down to bearable levels. The shoulder months of September to November in Jordan are the best time to go to Aqaba and the Red Sea, though prices rise as temperatures go down.

October, in particular, is a good time to visit as the first rain begins to fall following a blistering summer, which in turns make the parched countryside bloom again. October is also the best time to go diving in the Red Sea around Aqaba: the water is a comfortable 26°C and marine life is abundant.

When should I go to Petra?

The best time to visit Petra Dropdown content – Jordan’s most popular attraction – is in spring, when temperatures are neither too hot or cold. May, in particular, is a winner, because rainfall is very low (at 4mm) and thermometers are unlikely to read above 30°C. This is high season, though, so don’t expect to have the place to yourself.

Petra’s high elevation means that temperatures stay ‘doable’ throughout the summer months, peaking in August at 32°C. Beat the crowds and peak heat by arriving at around 5am in time for the rising sun.

In autumn things begin to cool off again and temperatures remain comfortable all the way through to November. In winter, you can expect short days and freezing nights; exceptional lows of -8°C have been recorded.

If you’re feeling up to it, though, a winter trip to Petra has its advantages: the low light creates much more variation in the colour of the sandstone. In summer – Jun to Aug – any such distinctions are largely washed out.

Air fares peak in the periods surrounding major Islamic holidays such as Eid al-Fitr and Eid al-Adha, when thousands – or, in the case of the hajj pilgrimage to Mecca, millions – of people are on the move.

For weeks before the hajj (which takes place in July until 2023), whole planes get block-booked for pilgrims on many routes into the Middle East – not just flights into Saudi Arabia, but also connections via Jordan and neighbouring countries. For two weeks after the pilgrimage, few planes out of the region have spare capacity.

Another consideration when thinking about the best time to travel to Jordan is, of course, Ramadan, the holy month of fasting. Dates change each year and for 2020, it falls in April. It pays to check when Islamic holidays are due to fall; book well ahead if you want to fly at or near those times.

One thing to watch when planning an itinerary is your scheduled arrival time: many flights from London, for instance, are afternoon departures, landing in Amman in the late evening – which means your head may not actually hit the pillow until midnight or later.

In addition, many return flights to London take off from Amman at breakfast time, necessitating a pre-dawn wake-up call. 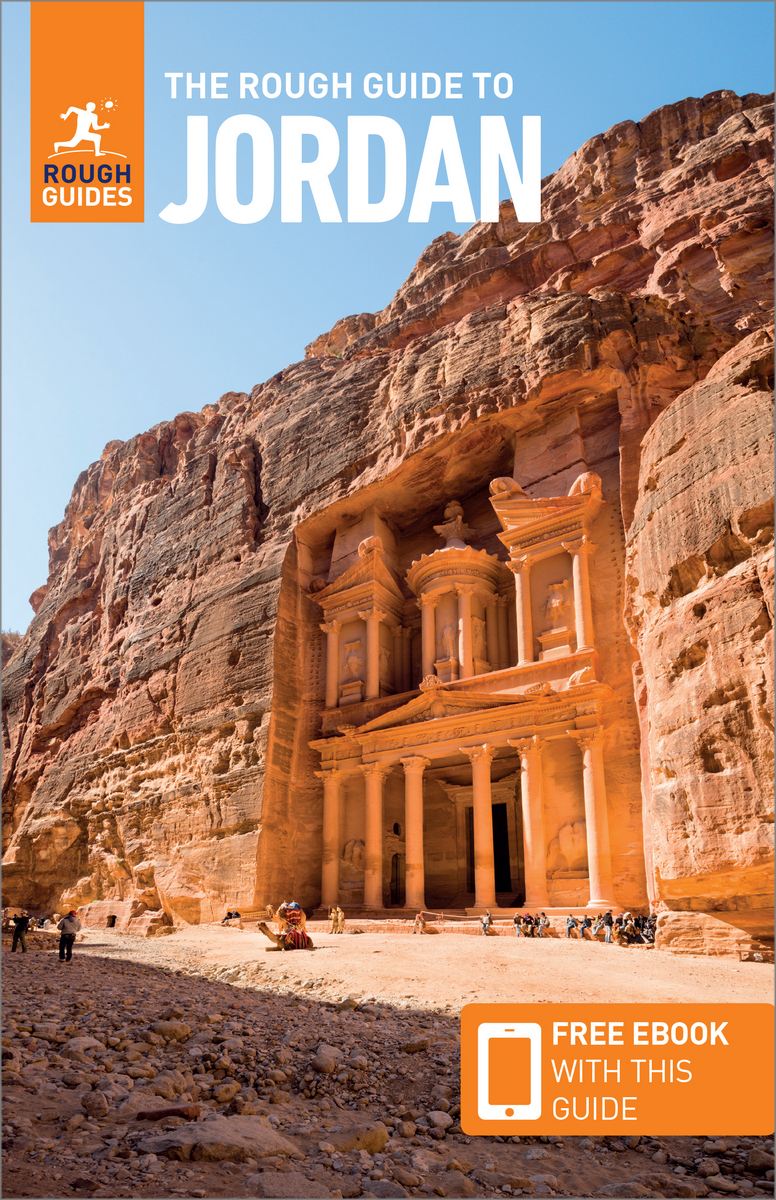