Our favourite islands in the Philippines

Graced by dazzling beaches, year-round sun and numerous opportunities for diving, island-hopping and surfing, the Philippines has long attracted a steady stream of foreign visitors. Yet there’s far more to these islands than sand and snorkelling. These are a few of our favourite islands in the Philippines.

Five kilometres east of Mactan Island, Olango Island supports the largest concentration of migratory birds in the country. About 77 species, including egrets, sandpipers, terns and black-bellied plovers, use the island as a rest stop on their annual migration from breeding grounds in Siberia, northern China and Japan to Australia and New Zealand. Declared a wildlife reserve in 1998, the island is also home to about 16,000 resident native birds which live mostly in the northern half; the southern half of the island is made up of a wide, shallow bay and expanses of mudflats and mangrove. The reserve is at its best during peak migration months: September to November for the southward migration and February to April northbound.

El Nido and the Bacuit Archipelago

The small coastal town of El Nido in the far northwest of Palawan is departure point for trips to the many islands of the Bacuit archipelago. This is limestone island country, with spectacular rock formations rising from the iridescent sea everywhere you look. These iconic karst cliffs with their fearsomely jagged rocky outcrops are believed to have been formed sixty million years ago, emerging from the sea as a result of India colliding with mainland Asia. As soon as the cliffs emerged, weathering and erosion started working on them to form deep crevices, caves, underground rivers and sinkholes.

Nearly three hours from the Cebu mainland by boat, the three friendly, peaceful Camotes Islands are largely untouched by tourism, making them an excellent place to experience real Visayan barrio life. The Supercat fast ferry Ocean Spray departs for Poro island twice daily from Cebu City. On the coast of Poro there are beaches where you can hire a shed or camp on the sands for the night. The best beaches and the best places for snorkelling and diving are mostly around Tulang, a picturesque islet lapped by turquoise waters off the northern coast of Pacijan.

The island of Panglao is a tropical diving paradise with some lovely sand beaches and a friendly little capital with an old Spanish church. The best quiet, undeveloped stretches of white sand on the east coast are Bikini Beach, San Isidro Beach and Libaong Beach – this is an ideal place to relax if you really want to get away from it all. The reef at the western end of Panglao, a few minutes by banca from Alona Beach, is in good condition, with healthy corals, a multitude of reef fish and perpendicular underwater cliffs that drop to a depth of 50m.

Between the islands of Panay and Negros is the small island province of Guimaras, known in the Philippines for the sweetness and juiciness of its mangoes. Separated from the Panay mainland by the narrowest slither of ocean, Guimaras is a gentle island of few hassles, where the people (about 110,000 of them, living mainly in five small towns) depend largely on agriculture for their livelihood and treat tourists with a mixture of kindness and curiosity. You get the feeling that while tourism has begun to get its claws into Guimaras, it still can’t quite hold on. In the hinterlands and most of the barangays, life continues to revolve around the harvesting of citrus fruit, coconuts and rice. Other industries are equally rural, including fishing, charcoal production, basket making and mat weaving. 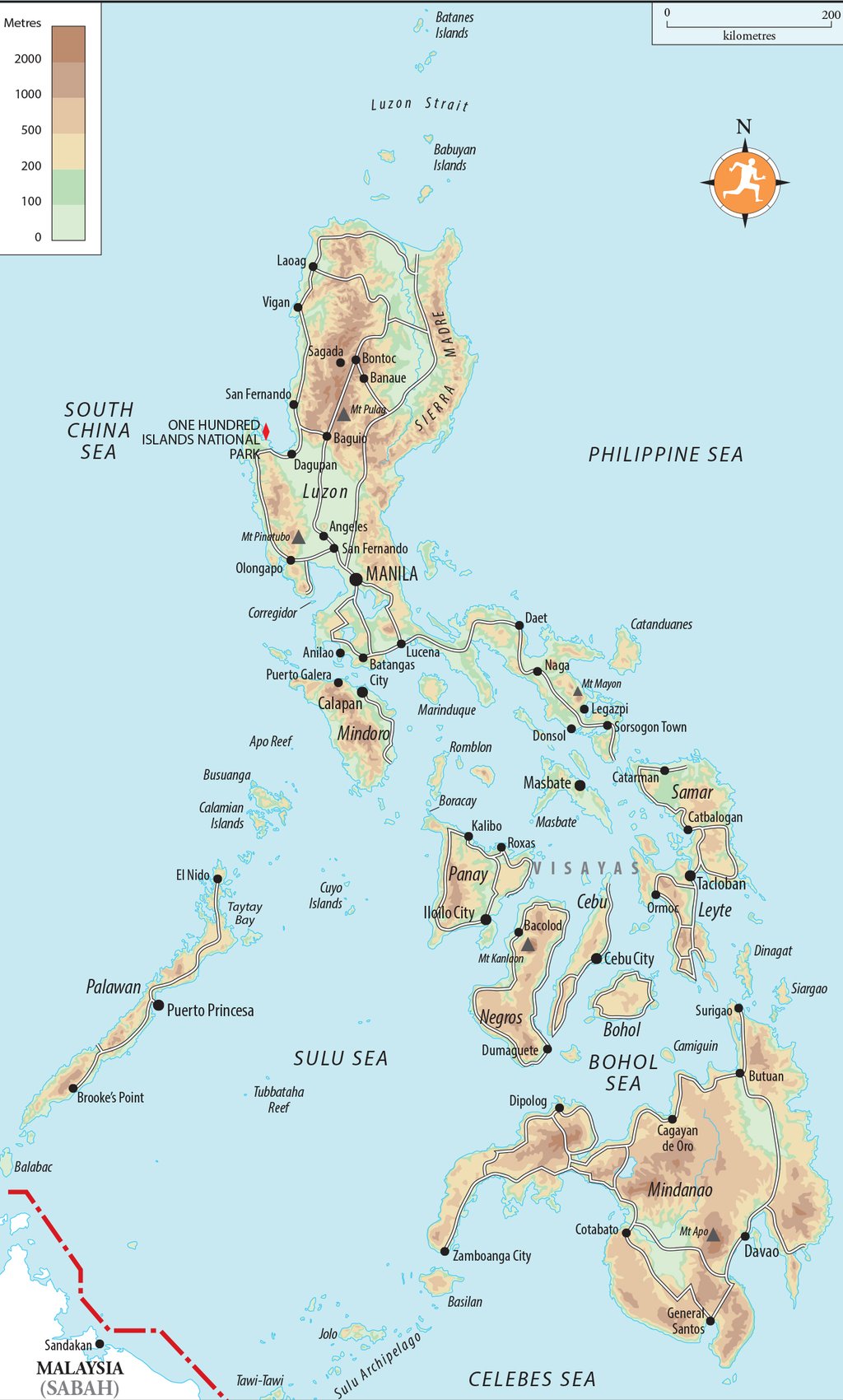 The substantial, vaguely triangular island of Panay has been largely bypassed by tourism, perhaps because everyone seems to get sucked towards Boracay off its northern tip instead. There’s room enough on Panay, though, for plenty of discovery and adventure: the island has a huge coastline and a mountainous, jungled interior that has yet to be fully mapped.

Dominated by the ragged saw-like bulk of Mount Guiting Guiting (an unforgettable sight), the isolated Sibuyan Island is the easternmost of the Romblon group and has everything an adventure traveller could dream of: a sparkling coastline, a thickly forested interior and a couple of daunting mountain peaks. This magnificent emerald isle, covering 450 square kilometres, has one of the most intact natural environments in the entire country, a fact that was recognized in 1996 when a large part of Sibuyan was declared a reserve.

Only 6km wide from the capital of San José on the east coast to Lanas on the west, Carabao Island is an idyllic place where fishing is the main industry and tourism has only just begun to have an impact. Divers arrive on day-trips to explore the surrounding reefs; there are a dozen well-known dive sites around the island, but there are no dive operators here so you’ll have to bring all your gear. It’s a shame few visitors linger for long on Carabao, because the island is surrounded by beautiful white sand beaches and is small enough to amble from east coast to west coast and back in a day, walking through coconut groves and paddy fields. Hire a motorbike in San José to get around; an enjoyable ride takes you to Tagaytay Point, the highest point on the island from where there are magnificent views across to Boracay and beyond.

The east Visayan island of Leyte, separated from Samar to the north by a mere slither of ocean, the San Juanico Strait, is another sizeable chunk of the Philippines that has a great deal to offer visitors but is often overlooked. You could spend a year on this island and still only scratch the surface: the coastline is immense, the interior rugged and there are lakes and mountains that are well off the tourist map, known only to farmers who have tilled their shores and foothills for generations.

Eight kilometres off the northern tip of Cebu, the island of Malapascua has been touted as the next Boracay, largely because of Bounty Beach, a blindingly white stretch of sand on the island’s south coast where a dozen simple resorts have sprung up offering a good choice of accommodation. The beauty of Malapascua is that while it’s every bit as scenic as Boracay (and, at 2.5km long and 1km wide, even smaller), it has none of the cosmopolitan development, with no big hotels, no fashionable nightclubs and only a handful of beach-style bars frequented largely by divers.

Everything good about the Philippines in one compact island package: superb diving, fine beaches, old Gothic churches and, uniquely, the iconic Chocolate Hills. Bohol Island is an attractive, dozy sort of place where life in the barrios and hinterlands is pastoral and quiet. The only sign of frenzied activity is on the beautiful beaches of Panglao Island, where scuba divers gather in incongruous neon wetsuits. Everywhere else, Bohol is on Filipino time and runs at a strictly Filipino pace. Even the carabao chew slowly.

Off the northeastern tip of Mindanao lies the teardrop-shaped island of Siargao, a largely undeveloped backwater with Boracay-type beaches and dramatic coves and lagoons. Siargao has got everything, with a typically tropical coastal landscape of palm trees and dazzling seas, and a verdant hinterland of rustic little barrios and coconut groves. Some of the first tourists here were surfers, who discovered a break at Tuason Point that was so good they called it Cloud 9, and though it’s still off the tourist trail, word-of-mouth is bringing an increasing number of surfers from around the world.

Samal Island – the Island Garden City of Samal to give it its rather grandiose official name – and the smaller island of Talicud, lie a stone’s throw southeast of Davao in the Gulf of Davao, across the narrow Pakiputan Strait. Samal is the better of the two islands to visit, simply because it’s larger and there’s more to explore. It has some lovely coves and beaches and a number of good areas for scuba diving, with intact coral reefs and a few wrecks; three Japanese wrecks lie next to each other off Pearl Farm Beach on the west coast.

Bantayan Island, just off the northwest coast of Cebu, is quiet and bucolic, flat and arable, without the moody mountains of mainland Cebu. It’s a great place to explore, though divers will be disappointed with the lack of coral left along the shore. Most of the island’s resorts and beaches are around the attractive little town of Santa Fe on the southeast coast, which is where ferries from mainland Cebu arrive.

Off the northern coast of Panay, between Mindoro and Bicol, the province of Romblon consists of three main islands – Tablas, Romblon and Sibuyan, and a dozen or so more smaller islands. The province is largely overlooked by visitors because it’s difficult to reach, and once you’re here, to put it simply, there’s not that much to do. There are few resorts and the most sophisticated Romblon’s nightlife gets is the occasional wooden shack with a karaoke machine. There are, however, some beautiful and rarely visited beaches and coral reefs, making it an excellent off-the-beaten-track destination for scuba diving, snorkelling or just exploring and getting a sense of provincial life in the archipelago.

Lying about 30km off the west coast of Mindoro, Apo Reef stretches 26km from north to south and 20km east to west, making it a significant marine environment. There are two main atolls separated by deep channels and a number of shallow lagoons with beautiful white sandy bottoms. Only in three places does the coral rise above the sea’s surface, creating the islands of Cayos de Bajo, Binangaan and Apo. The largest of these, Apo, is home to a ranger station and a lighthouse. The diving is really something special, with sightings of sharks (even hammerheads), barracuda, tuna and turtles fairly common. Most of the Philippines’ 450 species of coral are here, from tiny bubble corals to huge gorgonian sea fans and brain corals, along with hundreds of species of smaller reef fishes such as angelfish, batfish, surgeonfish and jacks.

Explore more of the Philippines with the upcoming Rough Guide to the Philippines, out in October 2014. Book hostels for your trip, and don’t forget to purchase travel insurance before you go.