How to get to Philippines

There are some nonstop flights to the Philippines from the west coast of North America and from Australia; from Europe, the only nonstop flights are from Amsterdam. Otherwise, reaching the Philippines from outside Asia usually involves a stopover in Hong Kong, Singapore or Dubai; most major airlines in the region have regular flights to Manila, with a few also flying to Cebu.

High season for Philippines travel is November to April, though airfares vary relatively little with the season. This is because the low season for the Philippines (May–Oct) is the peak season in Europe and the US, so flights heading out of these regions to various hub airports are often full.

If the Philippines is only one stop on a longer journey, you might want to consider buying a Round-the-World (RTW) ticket. In addition, some agents also offer Circle Pacific tickets, which cover Australia, New Zealand, the west coast of North America and destinations in the Pacific. You can include Manila and/or Cebu on some of the itineraries.

From the UK and Ireland

While there are no nonstop flights to Manila from the UK or the Republic of Ireland, there are routes involving only one stop on the way – in East Asia, in Europe or at a Middle Eastern hub such as Dubai or Doha. From London, the quickest journey is to fly to Hong Kong, from where there are numerous onward flights daily to Manila (total flying time is around 15hr, including the stopover), and Cebu. From Ireland, the cheapest option is to take a budget airline to London and change there.

As for fares, flying in August, low season in the Philippines, London–Manila costs around £500 return, rising to around £650–700 in January. From the Republic of Ireland, the best fares are around €900 via the UK and the Middle East.

From the US and Canada

Philippine Airlines operates nonstop flights to Manila from Los Angeles, San Francisco, Las Vegas and Vancouver, charging around US$1500 or Can$1500 for the round trip in high season. However, you can save around twenty percent on this fare if you travel on another airline such as Delta via, say, South Korea, Taiwan or Japan.

From Los Angeles or San Francisco, the flying time to Manila is around eleven hours. From the east coast of North America, flying via the Pacific, the journey will take around twenty hours excluding any layover (allow at least 2hr extra) along the way. If you choose to fly from New York via Paris, say, expect the journey to take around 24 hours altogether.

Philippine Airlines flies nonstop to Manila from Brisbane twice a week, Melbourne five times a week and Sydney five times a week; fares online can be as low as Aus$1000. Qantas flies Sydney to Manila nonstop just three times a week, and from Brisbane just once a week, but fares are always much higher (from Aus$1800 in high season). If you want to get to Cebu City, you can fly via Hong Kong or Kuala Lumpur, although it’s probably easiest simply to change in Manila.

From New Zealand there are no nonstop flights to the Philippines, so you’ll have to go via Australia or a Southeast Asian hub such as Singapore or Hong Kong. A typical fare is NZ$3000 Auckland–Manila via Kuala Lumpur, the journey taking 25 to 30 hours.

From South Africa you’ll always make at least one stop en route to Manila, and often two. Depending on the length of the stop, the trip will take from 16 to 26 hours. Qatar Airways has flights from around ZAR7000 return in high season from Johannesburg that stop in Doha. South African Airways and Cathay Pacific both have daily nonstop flights to Hong Kong from Johannesburg where you can connect with Cathay Pacific on to Manila; return fares are much higher in high season, costing around ZAR20,000.

You can fly direct to the Philippines from almost every major city in Asia, with several budget airlines offering cheap fares. Numerous flights make the two-hour trip from Hong Kong to Manila via Cathay Pacific, Philippine Airlines, Dragonair, Hong Kong Express Airways and Cebu Pacific, with the latter offering rates as low as HK$390 (US$50).

Many unlicensed boats ply back and forth between the Malaysian state of Sabah and the southern Philippines, but these are considered unsafe for tourists. The primary licensed (and safer) ferry route links Zamboanga City from Sandakan, Sabah. The M/V Danica Joy (Mon & Thurs 1pm; P3000; 20hr) belonging to Aleson Shipping (t062/991-2687) serves this route, offering cheap bunk-bed accommodation on deck, as well as a limited number of cabins. SRN Fast Seacraft (t062/992-3756) has small, but modern ferries that operate twice a week from Sandakan to Zamboanga (from P3000; 13hr), with stops in Jolo and Bongao, Tawi-Tawi.

There are no regular ferry services to northern Sulawesi, Indonesia, from the Philippines. Illegal, small boats often make the trip from General Santos; it’s far safer and faster to fly via Manila and Kuala Lumpur.

Many discount travel websites offer you the opportunity to book flight tickets and holiday packages online, cutting out the costs of agents and middlemen; these are worth going for, as long as you don’t mind the inflexibility of non-refundable, non-changeable deals. There are some bargains to be had on auction sites too, if you’re prepared to bid keenly. Almost all airlines have their own websites, offering flight tickets that can sometimes be just as cheap, and are often more flexible.

The Philippines is not a major destination for package tours, most tour operators to the region preferring to stick to the Southeast Asian mainland. Those that do offer Philippines tours tend to focus on Manila, Cebu, Boracay and Banaue, which means you don’t have much flexibility in choosing where to go. You’ll need to weigh the convenience of having accommodation, transport and excursions arranged for you against the fact that you’ll pay significantly more than if you travel independently.

The Rough Guide to Philippines and related travel guides 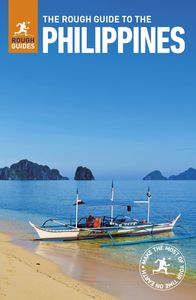