Morocco’s biggest city and commercial capital, Casablanca (Dar el Baida in its literal Arabic form) is the Maghreb’s largest port, and busier than Marseilles, on which it was modelled by the French. Its development, from a town of 20,000 in 1906, has been astonishing but it was ruthlessly deliberate. When the French landed their forces here in 1907, and established their Protectorate five years later, Fez was Morocco’s commercial centre and Tangier its main port. Had Tangier not been in international hands, this probably would have remained the case. However, the demands of an independent colonial administration forced the French to seek an entirely new base. Casa, at the heart of Maroc Utile, the country’s most fertile zone and centre of its mineral deposits, was a natural choice.

Superficially, with a population of over three million, Casa today is not unlike a large southern European city. Arriving here from the south, or even from Fez or Tangier, most of the preconceptions you’ve been travelling round with will be happily shattered by the city’s cosmopolitan beach clubs or by the almost total absence of the veil. But these “European” images shield what is substantially a first-generation city – and one still attracting considerable immigration from the countryside – and perhaps inevitably some of Morocco’s most intense social problems.

Casablanca’s most obvious sight is the Mosquée Hassan II, and it also has the only Jewish museum in the Muslim world, but the city’s true delight remains the Mauresque and Art Deco architecture built during the colonial period, in particular the 1920s and 1930s. Casa can be a bewildering place to arrive, but once you’re in the centre, orientation gets a little easier. It’s focused on a large public square, Place Mohammed V, and most of the places to stay, eat, or (in a rather limited way) see, are located in and around the avenues that radiate from it. A few blocks to the north, still partially walled, is the Old Medina, which was all there was of Casablanca until around 1907. Out to the south is the Habous quarter – the New Medina, created by the French, while to the west, along the Corniche past the Mosquée Hassan II, lie the beach suburbs of Aïn Diab and Anfa.

The French-built city centre and its formal, colonial buildings already seem to belong to a different and distant age. The style of the administrative buildings in particular is known as Mauresque, or sometimes as “Neo-Moorish”, essentially a French idealization and “improvement” on traditional Moroccan styles, with lots of horseshoe arches, and even the odd touch of darj w ktaf, originally an Almohad motif. Many private buildings of the early colonial period (from 1912 until the early 1920s) were heavily influenced by the flowery Art Nouveau of fin-de-siècle Europe. Following the 1925 Exposition des Arts Decoratifs in Paris, a new and bolder style, named Art Deco after the Exposition, began to take hold, inspired by many sources, including traditional Moroccan design. A meander along downtown Casa’s streets, taking in the city’s Deco heritage – be sure to look upwards, since most of the finer features stop short of ground-floor level – can prove very rewarding.

Alongside its wealth and its prestige developments – notably the Hassan II Mosque – Casablanca has had a reputation for extreme poverty, prostitution, crime, social unrest and the bidonvilles (shanty towns) which you will see on both sides of the train track as you come into town. In fact, the French word bidonville – literally “tin-can town” – was coined in Casablanca in the 1920s, when construction workers on a building project in the Roches Noires district, east of the port area, knocked up some temporary accommodation next to their main quarry. Over the decades, other migrant workers followed suit, and the bidonvilles escalated, partly from the sheer number of migrants – over a million in the 1960s – and partly because few of them intended to stay permanently. Most sent back their earnings to their families in the country, meaning to rejoin them as soon as they had raised sufficient funds for a business at home.

The pattern is now much more towards permanent settlement, and this, together with a strict control of migration and a limited number of self-help programmes, has eased and cleared many of the worst slums. Also, bidonville dwellers have been accorded increasing respect during recent years. They cannot be evicted if they have lived in a property over two years, and after ten years they acquire title to the land and building, which can be used as collateral at the bank for loans. The dread of every bidonville family is to be evicted and put in a high-rise block, regarded as the lowest of the low on the housing ladder.

The problem of a concentrated urban poor, however, is more enduring and represents, as it did for the French, an intermittent threat to government stability. Through the 1940s and 1950s Casa was the main centre of anti-French rioting, and post-independence it was the city’s working class that formed the base of Ben Barka’s Socialist Party. There have been strikes here sporadically in subsequent decades, and on several occasions they precipitated rioting, most violently in the food strikes of 1982. More recently, the bidonvilles also proved a fertile recruiting ground for jihadi extremists – one bidonville, Sidi Moumen, was home to perpetrators of bomb attacks in Casablanca in 2003, and Madrid the following year, and also to a suicide bomber who blew himself up in a Casablanca internet café in 2007.

Raised on a rocky platform reclaimed from the ocean, the Hassan II Mosque was inaugurated on August 30, 1993. Designed by French architect Michel Pinseau, it is open to non-Muslims on accompanied one-hour visits that also visit the mosque’s huge and elaborate basement hammam.

From the city centre, the mosque’s huge size tricks you into thinking it’s nearer than it is. The minaret is 200m high, making it by far the tallest structure in the country, and the tallest minaret in the world. A laser on its summit projects a beam towards Mecca. It has space for 25,000 worshippers within, and 80,000 more in the courtyard. From the street, the mosque seems to float on the ocean below, a reminder of the Koran’s statement (11:7), reiterated by Hassan II, that God’s throne is upon the water. In order that the faithful can “contemplate God’s sky”, the enormous roof of the mosque rolls open on occasions. The mosque is second only to Mecca’s in size, and St Peter’s Basilica in Rome could fit comfortably inside it.

The facts of the mosque’s construction are almost as startling as its size. During the early 1990s, when it was being readied for opening, 1400 men worked by day and a further 1100 by night. Most were master-craftsmen, working marble from Agadir, cedar from the Middle Atlas, granite from Tafraoute, and (the only import) glass from Murano in Venice. Its cost is reckoned to have exceeded £500m/US$750m, raised by not entirely voluntary public subscription.

You must remember this…

One of the best-known facts about Casablanca is that it wasn’t the location for Michael Curtiz’s movie, all of which was shot inside the Warner Bros studio in Hollywood. Banking on a major hit and upset by the Marx Brothers filming A Night in Casablanca, Warner Bros even wanted to copyright the very name Casablanca – which could have been inconvenient for the city.

The film of course owes its enduring success to the romantic tension between Humphrey Bogart and Ingrid Bergman, but at the time of its release it received a major publicity boost by the appearance of Casablanca and Morocco in the news. As the film was being completed, in November 1942, the Allies launched Operation Torch, landing 25,000 troops on the coast north and south of Casablanca, at Kenitra, Mohammedia and Safi. The troops, under General Eisenhower, consisted mainly of Americans, whom Roosevelt believed were less likely than the British to be fired on by the Vichy French colonial authorities. An even more fortunate coincidence took place in the week of the film’s première in Los Angeles in January 1943, as Churchill and Roosevelt had arranged an Allied leaders’ summit, and the newsreels revealed its location: the Casablanca Conference, held in Anfa, out beyond Aïn Diab. Such events – and the movie – are not, it has to be said, evoked by modern-day Casa, though the movie is commemorated in the city at the American-owned Rick’s Café. 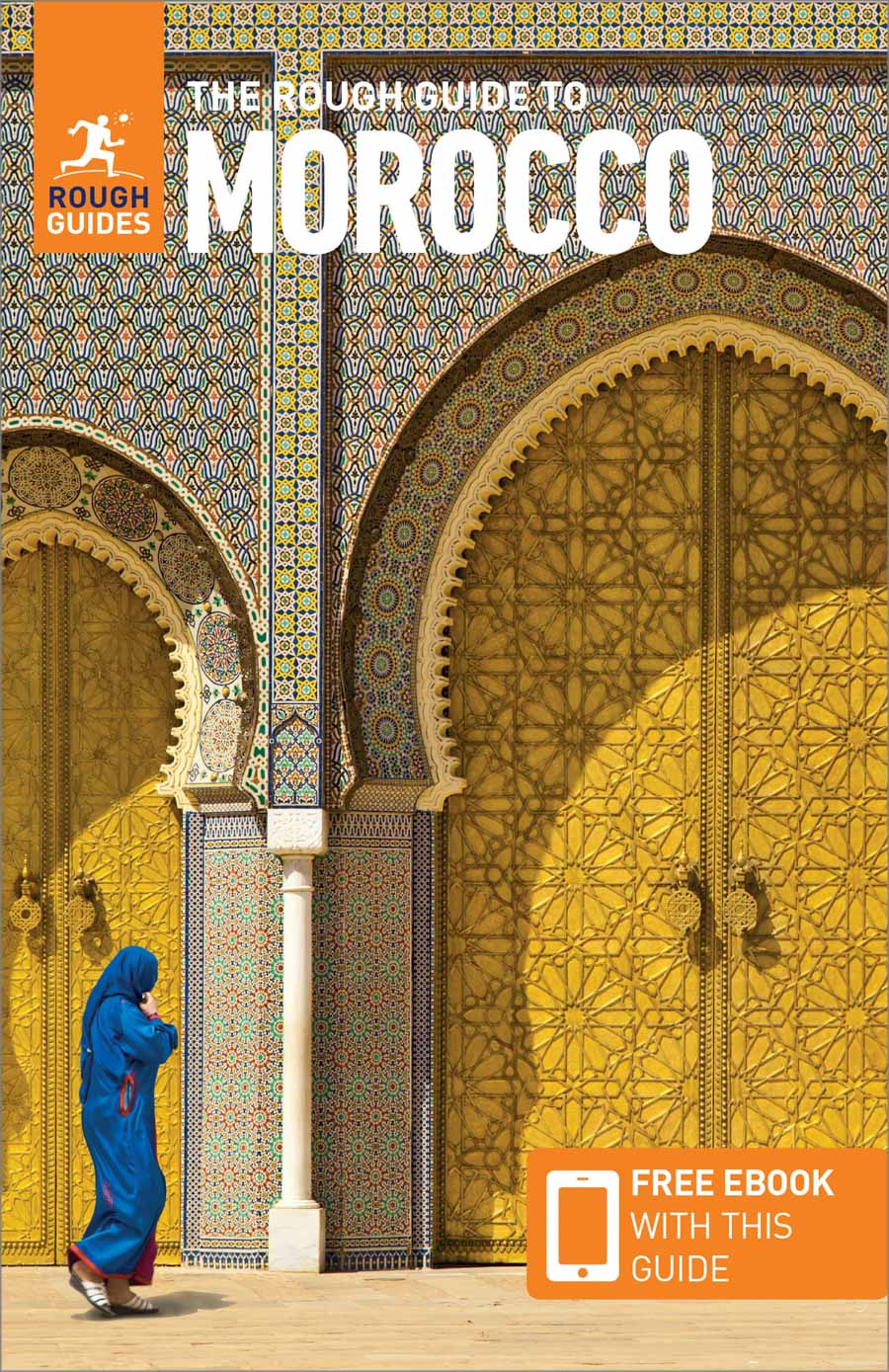