On the hundreds of islands on Thailand’s coast, there are thousands of fantastic beaches to choose from. Whether you want to party hard with a vodka bucket, or just relax in a beachside bungalow, Thailand has it all – so, taken from the latest guidebook Dropdown content, here’s our rundown of the best beaches in Thailand Dropdown content. 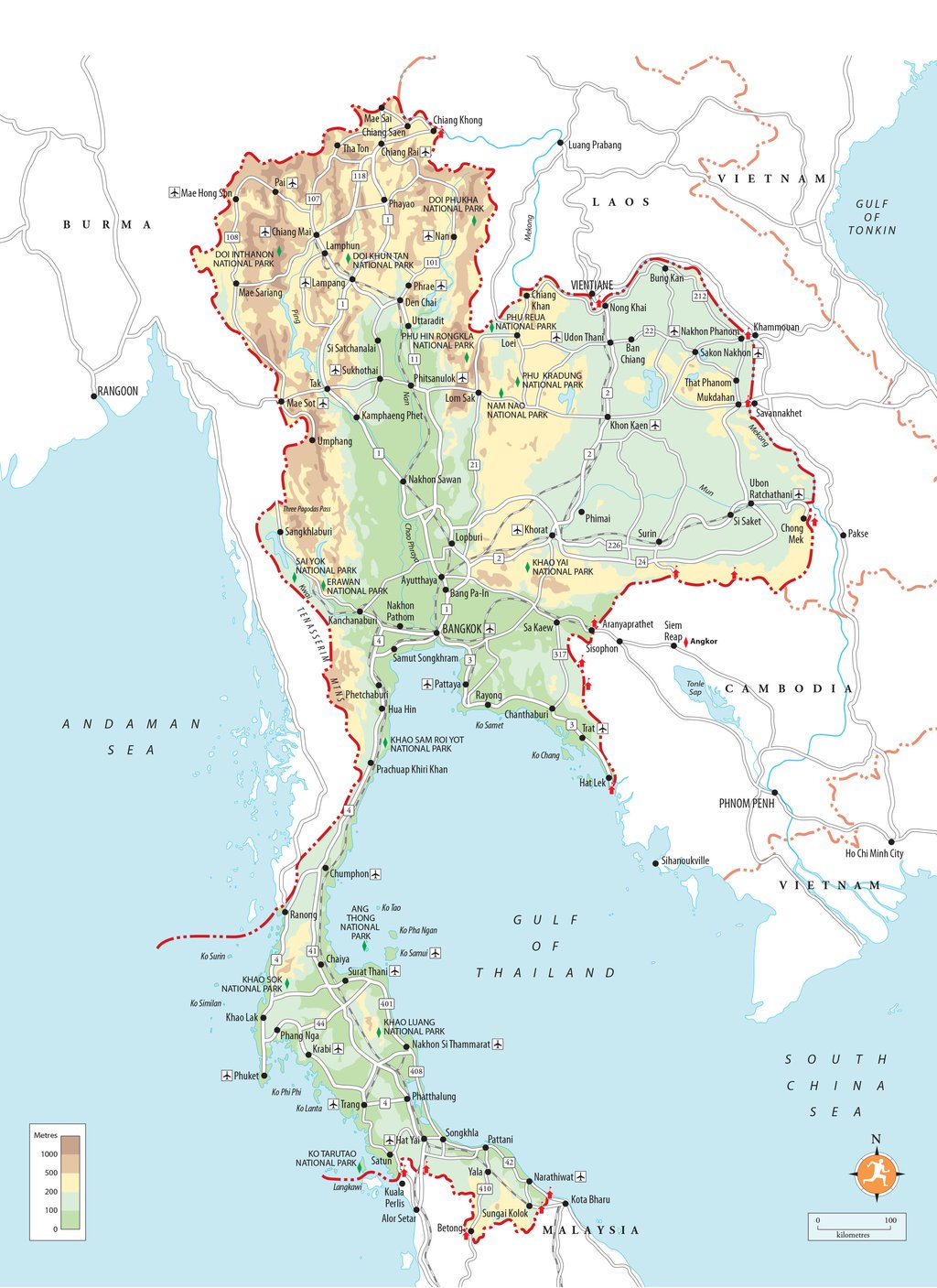 To the north of the island's main landing point, Mae Hat, and beyond a small promontory, you’ll find Hat Sai Ree – Ko Tao’s longest beach. This strip of white sand stretches for 2km in a gentle curve, backed by a smattering of coconut palms and scores of bungalow resorts.

For a particularly remote, almost desolate escape, head to Ao Hinwong – one of many sheltered inlets on the east coast. As the most northerly habitation on Ko Tao, this is a deeply recessed, limpid bay strewn with large boulders and great coral reefs – all the more reason for its place as one of the best beaches in Thailand.

Inspired by our best beaches in Thailand? Try our new tailor-made travel service Dropdown content and enjoy a fully personalised trip planned by a local expert.

In the middle of the coast, the dramatic tiered promontory of Laem Thian shelters, on its south side, a tiny beach and a colourful reef, which stretches down to the east coast’s most developed bay of Ao Ta Note. Ta Note’s horseshoe inlet is sprinkled with boulders and plenty of coarse sand, with excellent snorkelling just north of the bay’s mouth.

Just 1km from Ko Tao, this close-knit group of three tiny islets provides the most spectacular beach scenery in these parts, thanks to the causeway of fine sand that joins up the islands. You can easily swim off the east side of the causeway to snorkel over the Japanese Gardens, which feature hundreds of hard and soft coral formations.

A shining crescent of squeaky-soft white sand, with its offshore reef and relaxed, anything goes atmosphere, Ko Lipe island ­– another of the Ko Tarutao National Park archipelago – is attracting an influx of Westerners, Thais and Malaysian backpackers and families. As so many flock to this pristine stretch of sand, it's secured a firm place up there as one of the best beaches in Thailand.

Accessible by climbing over the headland to the north (which gives a fine panorama over Hat Sai Kaew), the secluded Ao Nuan is Samet’s smallest and most laid-back beach. Because it’s some way off the main track, it gets hardly any through-traffic and feels quiet and private.

One of the many beaches on Ko Samet’s east coast, and much smaller than its busier neighbour, this stretch has more of a travellers’ vibe. Just three sets of bungalows overlook the petite white-sand beach from the slope on the far side of the dirt road – surely making this not only one of the best beaches in Thailand, but one of the best secrets, too.

Otherwise known as “Diamond Beach”, Hat Sai Kaew was named for its long and extraordinarily beautiful stretch of luxuriant sand, so soft and clean it squeaks under foot – a result, apparently, of its unusually high silicon content. Unsurprisingly, it’s the busiest beach on Samet, but the northern end is slightly more peaceful.

On the island’s north coast, known as Ao Noi Na – even though it’s not strictly a single bay – has a refreshingly normal village feel compared to the rest of Samet. There are an increasing number of places to stay along the narrow coastal road here, offering serene views across the water to the mainland hills, and one white-sand beach of note at the far western end.

A favourite with Thai students, who relish the beauty of its slightly wild setting, “Candlelight Beach”, and contiguous Ao Lung Dum display almost none of the commerce of other beaches on this island. The narrow, white-sand coastline is dotted with wave-smoothed rocks and partitioned by larger outcrops that create several distinct bays.

This is a deep, lagoon-like scoop of a bay that’s occasionally visited by dugongs and is edged by a dense mangrove forest. A wide swathe of this mangrove swamp is protected under a royal conservation project and crossed by a kilometre-long boardwalk. The uniqueness of this area makes it one of the best beaches in Thailand you can add to your bucket list.

One of the island’s nicest beaches, this sweeping, casuarina-fringed bay is yet to see the clutter and claustrophobic development of its neighbours. It begins with a nice 1km-long run of beach that’s interrupted by a wide khlong (canal), whose estuary is the site of some characterful stilt homes and seafood restaurants. The southern beach is partly shaded by casuarinas and backed by a huge coconut grove.

Named “Lonely Beach” before it became Ko Chang’s top place to party, this stretch of sand has, despite the creeping concrete, some creatively designed little wood and bamboo bar-restaurants, some of them offering chilled, low-key escapes from the the loud dance music, all night parties and buckets of vodka Red Bull that the beachfront places are notorious for.

On the southwest coast, the longest and nicest beach on Ko Mak, is a pretty arc of sand overhung with stooping palm trees and backed in places by mangroves. The beach is divided towards its southern end by a low rocky outcrop that’s straddled by a couple of resorts, while the long western beach is shared by a dozen other sets of bungalows, most of them around the pier.

Long, curvy Ao Suan Yai is not as pretty as Ao Kao on the opposite side of the island, but it's still one of the best beaches in Thailand; the sand is fine and the outlook is beautiful, with Ko Chang’s hilly profile filling the horizon and Ko Kham and other islets in-between.

With its lovely long parade of soft, white sand, calm and crystal-clear water that’s good for swimming and shady fringes of casaurina trees, Ao Phra-Ae (also known as Long Beach) is strikingly beautiful and the best of Lanta’s many long beaches.

This is one of Ko Kood’s prettiest beaches, fronted by a longish sweep of bleach-white sand and deliciously clear turquoise water, plus the inevitable fringe of coconut palms, and embraced by a pair of protective promontories.

Just one hour by speedboat from the mainland, this long, unspoilt, stunning beach of white sand, backed by densely planted palms and the slopes of Khao Chom, is the perfect place to relax after the chaos of Bangkok. Behind Ao Phrao, the tiny fishing village of Ban Khlong Phrao occupies the mangrove-lined banks of Khlong Phrao (which extends another kilometre inland).

Ao Thong Nai Pan is a beautiful, semicircular bay backed by steep, green hills, which looks as if it’s been bitten out of the island’s northeast corner by a gap-toothed giant, leaving a tall hump of land dividing the bay into two parts. With lovely, fine, white sand, the longer, more indented southern part is the marginally better beach, but both halves of the bay are sheltered and deep enough for swimming.

For a few on-foot excursions once you’re all beached out, head to Ao Sone on Ko Tartuao – part of the Ko Tarutao National Park archipelago. Named so because of the casaurina trees that fringe the beach, this is a 3km sweep of flawless sand has a one hour trail leading up to Lu Du Waterfall at the north end, and a 90-minute trail to Lo Po Waterfall in the middle and a mangrove swamp at the far south end.