Though temperatures in Trinidad and Tobago remain tropical year-round, most people visit between January and March, when Carnival explodes into life, the trees are in bloom and the climate is at its most forgiving – the sun shines, rain is rare and the nights are cool.

By May, the lack of rain has parched the formerly lush landscape: greens turn to yellow, dust clouds put the views into soft focus and bush fires rage through Trinidad’s hills. Around the end of May, the rainy season begins, and the skies open up with dramatic deluges that can last all day.

The wet season lasts until November, but there’s usually a respite from the downpours in September, a period of hot sunshine and blue skies known as the petit carem, worth considering when thinking about the best time to visit. It’s an excellent time to plan your trip, with flights at low-season rates, though you’ll find the resorts a little quiet.

Some Tobago hoteliers raise rates during the high season (Dec 15–April 15), and those in Trinidad’s Grande Riviere do the same during the turtle-laying season (March–Sept), but most of the smaller hotels charge the same year-round in both islands. During Carnival week, however, all Port of Spain hotels and guesthouses boost their rates.

Festivals and holidays in Trinidad and Tobago

Trinbagonians have a well-deserved reputation for partying. No religious event passes without festivity, and on the thirteen public holidays, banks and workplaces close and many take the opportunity to enjoy the country’s beaches. Concerts are organized, shops have holiday sales and the newspapers are full of events and articles relating to the celebrations.

Public holidays embody T&T’s cultural and ethnic diversity, acknowledging Hindus, Muslims, Baptists, Roman Catholics, trade unions and people of African and Indian descent. Every year there is a debate whether the Chinese should be given a day for Chinese New Year, and frequent discussion, too, as to whether the country has too many days off – but no politician is likely to risk offending a sector of the community by cancelling one. Though not officially recognized as a public holiday, Carnival functions like one: everything shuts down for the main days (the last Monday and Tuesday before Lent), and to a lesser degree for Ash Wednesday as well.

Carnival season Trinidad and Tobago. The festivities swing into action with the season’s first fete, usually Soca in Moka in early Jan, and the fetes, calypso tents, steel pan competitions and general buzz build in intensity as the main days approach.

Phagwah Celebrated in March or early April to honour the Indian tradition of Holi, which celebrates the arrival of spring, Phagwah is best experienced in central Trinidad. It’s not a public holiday, but many Trinis of all backgrounds participate.

Goat Races Tobago. Held at Mount Pleasant on Easter Monday, with the main event at Buccoo the following day, Tobago’s goat races are one of the highlights of T&T’s festival calendar.

Easter Weekend Trinidad. As well as attending church and baking hot cross buns, Trinidadians indulge in the “beating of the bobolee”, which involves pummelling an effigy of Judas Iscariot or, more usually these days, of any politician or public figure who’s seen to deserve a good pounding. The skies above Port of Spain’s Savannah also glitter with kites on Easter weekend, with a competition for the biggest and best.

La Divina Pastora Held on the third Sunday after Easter in Siparia in southern Trinidad. The Black Virgin statue is carried in a procession through the town, while locals, decked out in new clothes, celebrate the event with feasting and merrymaking.

Pont Fortin Borough Day More a series of events than a day, from exhibitions, parties and concerts to beauty pageants, all of which culminate in a Jouvert and mas (masquerade) on the streets in early May, followed by a beach cooldown the next day.

Pan in the 21st Century Steel band competition with a final held in the Jean Pierre Complex, Port of Spain.

Indian Arrival Day May 30. This public holiday commemorates the 1845 arrival of the first indentured Indian labourers in Trinidad.

We Beatwwebeat.org. Held in and around the Amphitheatre on Western Main Road in St James, Port of Spain, with concerts, parties and other events – expect lots of pan, too.

Corpus Christi June 10. A Catholic public holiday, celebrated with processions in small villages, though a quiet day in urban areas.

Labour Day June 19. A public holiday held in recognition of trade unions and workers. It is most publicly celebrated in Fyzabad in southern Trinidad, where the powerful Oil Workers’ Union was established.

Tobago Heritage Festivalwvisittobago.gov.tt. Held in the last two weeks of July all over the island. Festivities include a traditional calypso competition, an “old-time” Tobago wedding ceremony and sports events.

Great Fete Tobago. Huge beach parties and concerts at Pigeon Point and other venues around the island.

Emancipation Day August 1. The 1834 abolition of slavery is commemorated with a procession through Port of Spain.

Great Race Speedboats navigate the dangerous currents of the Dragon’s Mouth in a race from Trinidad to Tobago. It starts from Chaguaramas in the morning, but the festivities take place at the finishing line at Store Bay in Tobago in the afternoon.

Santa Rosa Festival Held the last week in August in Arima in Trinidad. Celebrates the culture and tradition of indigenous Amerindians with musical and acrobatic performances as well as obligatory feasting and street parties.

Independence Day August 31. Independence from Britain in 1962 is celebrated with flags and bunting on all public buildings, banks and institutions, while fetes and street parties feature soca and dub artists.

Trinidad & Tobago Film Festivalwttfilmfestival.com. Held over two weeks, with films from all over the Caribbean, plus arthouse cinema from around the world, screened at MovieTowne Port of Spain, Chaguanas and Tobago.

Steel Pan Jazz Festival Held at Port of Spain’s Queen’s Hall, this series of concerts and workshops at the beginning of the month features a fusion of foreign jazz masters and the hottest Trini steel bands.

Diwali An end-of-month festival honouring Mother Lakshmi, the Hindu goddess of light, via the lighting of deya candles throughout T&T. The National Council of Indian Culture stages nine days of shows, stalls and events.

Blue Food Festival Bloody Bay, Tobago. Held in celebration of the starchy tubers – yam dasheen, eddoes and the like which feature so heavily in Tobago cuisine, and which are cooked up in many imaginative and delicious ways: don’t miss the dasheen ice cream.

Hosay This religious festival changes date every year according to the Islamic calendar, and is occasionally staged twice annually. The biggest event takes place in the Port of Spain suburb of St James, though it is also celebrated in Curepe, Tunapuna, Couva and Cedros.

Parang season A tradition of nativity songs sung in Spanish with a mix of French patois dating from colonial days; performed by Parang groups (Oct–Dec) in bars, nightclubs and door to door, filling the streets with rich, haunting music.

Carnival and its associated events shift around each year depending on the days of the main parade, which takes place on the last Monday and Tuesday before Lent; upcoming Carnival dates are as follows: Feb 8 & 9 2016; Feb 27 & 28 2017; February 12 & 13 2018; March 4 & 5 2019; Feb 24 & 25 2020. The tourist board website wgotrinidadandtobago.com has a fairly up-to-date calendar of events; the list here represents the main events, which appear in rough order of occurrence; Carnival season traditionally begins on January 1.

Steel pan bands play their composition of choice on the Savannah stage as they compete for the prestigious first prize. The semi-finals are the biggest deal, held on the Saturday two weeks before Carnival and featuring the “Greens” liming spot (entry fee applicable) as well as the actual pan competition. The finals take place on Carnival Saturday.

The best of Trinidad’s popular chutney performers compete for the annual crown.

The children’s costumes and characters rival those of the adults. There are three parades: the Red Cross Children’s Carnival, held at the Savannah ten days before Carnival; the smaller St James Kiddies’ Carnival on the following day; and the Junior Parade of the Bands from South Quay to the Queen’s Park Savannah on Carnival Saturday.

Held on the Sunday preceding Dimanche Gras, and the last Friday before Carnival Monday, with parades throughout the day and evening from South Quay to Adam Smith Square on Ariapita Avenue; this is the best place to see traditional Carnival characters such as Blue Devils, Dame Lorraine, Burrokeets, Fancy Sailors and Firemen. There are also traditional mas parades in St James (outside the Amphitheatre, Western Main Rd); check the press for dates and timings.

“Fantastic Friday” (the Friday before Carnival) sees the cream of the region’s soca stars sing for the prestigious International Soca Monarch and Groovy Soca Monarch titles to a huge and packed crowd in the National Stadium.

Parades by the King and Queen of Carnival and the Calypso Monarch, finals staged at the Queen’s Park Savannah on the Sunday before the main parades. Calypsonians go all-out with theatrical presentations of their compositions, while the sheer size of the King and Queen costumes, and the skill, sequins and special effects expended makes an amazing spectacle.

(pronounced “joovay”, from the French “Jour Ouvert”, the break of day). Marking the beginning of the festivities, Jouvert is “dirty mas”: raw, earthy and energetic. Wear as little as possible (no jewellery), join an organized band and expect to be covered in mud, paint, chocolate or even oil.

Carnival Monday Parade of the Bands

Parades through the streets of Port of Spain from noon till dusk; most masqueraders don’t wear their costumes on this day, instead getting creative with skimpy “Monday Wear”.

Carnival Tuesday Parade of the Bands

The full display of all the costumes. The route is the same as Carnival Monday; if you’re not in a band, you can view the bands from the stands at the Queen’s Park Savannah (for which you pay an entry fee), at the bleachers set up at the judging points at South Quay, Victoria Square on Park Street and Adam Smith Square on Ariapita Avenue at the Socadrome or anywhere along the parade route. Starts 7am.

The huge cooldown parties usually held at Maracas and Manzanilla have been scaled down in recent years; check the press for details of what’s on, or follow the crowds and escape to Tobago.

Note that the Monday and Tuesday of Carnival as well as Ash Wednesday are also observed as public holidays. The dates of Hindu and Muslim festivals vary according to phases of the moon and other astronomical observations. When a public holiday falls on a Sunday, it is observed on the Monday, and when two holidays fall on the same date the following day is also given.

The Rough Guide to Trinidad and Tobago and related travel guides

Travel advice for Trinidad and Tobago

Find even more inspiration for Trinidad and Tobago here 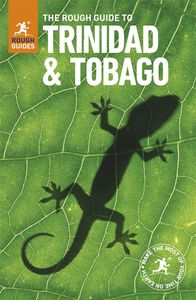 Your travel guide to Trinidad and Tobago

Ready to travel and discover Trinidad and Tobago?
Get support from our local experts for
stress-free planning & worry-free travels