Even if you’re not an inveterate shopper, cruising Japan’s gargantuan department stores or rummaging around its vibrant discount outlets is an integral part of local life that shouldn’t be missed. Japan also has some of the most enticing souvenirs in the world, from lacquered chopsticks and delicate handmade paper to the latest electronic gadgets.

All prices are fixed, except in flea markets and some discount electrical stores where bargaining is acceptable. Though it’s always worth asking, surprisingly few shops take credit cards and fewer still accept cards issued abroad, so make sure you have plenty of cash.

In general, shop opening hours are from 10am or 11am to 7pm or 8pm. Most shops close one day a week, not always on Sunday, and smaller places tend to shut on public holidays. If you need anything after hours, you’ll find late-opening convenience stores in even the smallest towns, and stores that are open 24 hours in most towns and cities, often near the train station.

Many of Japan’s arts and crafts date back thousands of years and have been handed down from generation to generation ( for more on the arts). Though the best can be phenomenally expensive, there are plenty of items at more manageable prices that make wonderful souvenirs. Most department stores have at least a small crafts section, but it’s far more enjoyable to trawl Japan’s specialist shops. Kyoto is renowned for its traditional crafts, and in Tokyo you’ll find a number of artisans still plying their trade, while most regions have a vibrant local crafts industry turning out products for the tourists.

Some of Japan’s most beautiful traditional products stem from folk crafts (mingei), ranging from elegant, inexpensive bamboo-ware to woodcarvings, toys, masks, kites and a whole host of delightful dolls (ningyō). Peg-shaped kokeshi dolls from northern Honshū are among the most appealing, with their bright colours and sweet, simple faces. Look out, too, for the rotund, round-eyed daruma dolls, made of papier-mâché, and fine, clay Hakata-ningyō dolls from northern Kyūshū.

Japan’s most famous craft is its ceramics (tōjiki). Of several distinct regional styles, Imari-ware (from Arita in Kyūshū) is best known for its colourful, ornate designs, while the iron-brown unglazed Bizen-ware (from near Okayama) and Mashiko’s simple folk-pottery are satisfyingly rustic. Other famous names include Satsuma-yaki (from Kagoshima), Kasama-yaki (from Ibaraki), Kanazawa’s highly elaborate Kutani-yaki and Kyoto’s Kyō-yaki. Any decent department store will stock a full range of styles, or you can visit local showrooms. Traditional tea bowls, sake sets and vases are popular souvenirs.

Originally devised as a means of making everyday utensils more durable, lacquerware (shikki or urushi) has developed over the centuries into a unique art form. Items such as trays, tables, boxes, chopsticks and bowls are typically covered with reddish-brown or black lacquer and either left plain or decorated with paintings, carvings, sprinkled with eggshell or given a dusting of gold or silver leaf. Though top-quality lacquer can be hugely expensive, you’ll still find very beautiful pieces at reasonable prices. Lacquer needs a humid atmosphere, especially the cheaper pieces which are made on a base of low-quality wood that cracks in dry conditions, though inexpensive plastic bases won’t be affected. Wajima is one of the most famous places for lacquerware in Japan.

Traditional Japanese paper (washi), made from mulberry or other natural fibres, is fashioned into any number of tempting souvenirs. You can buy purses, boxes, fans, oiled umbrellas, lampshades and toys all made from paper, as well as wonderful stationery.

Original woodblock prints, ukiyo-e, by world-famous artists such as Utamaro, Hokusai and Hiroshige, have long been collectors’ items fetching thousands of pounds. However, you can buy copies of these “pictures of the floating world”, often depicting Mount Fuji, willowy geisha or lusty heroes of the kabuki stage, at tourist shops for more modest sums. Alternatively, some art shops specialize in originals, both modern and antique.

Japan has a long history of making attractive textiles, particularly the silks used in kimono. Other interesting uses of textiles include noren, a split curtain hanging in the entrance to a restaurant or bar; cotton tenugui (small hand towels), decorated with cute designs; and the furoshiki, a square, versatile wrapping cloth that comes in a variety of sizes.

While the chunky iron kettles from Morioka in northern Honshū are rather unwieldy mementos, the area also produces delicate fūrin, or wind chimes, in a variety of designs. Damascene is also more portable, though a bit fussy for some tastes. This metal inlay-work, with gold and silver threads on black steel, was originally used to fix the family crest on sword hilts and helmets, though nowadays you can buy all sorts of jewellery and trinket boxes decorated with birds, flowers and other intricate designs.

Pearls, however, are undoubtedly Japan’s most famous jewellery item, ever since Mikimoto Kōkichi first succeeded in growing cultured pearls in Toba in 1893. Toba is still the centre of production, though you’ll find specialist shops in all major cities, selling pearls at fairly competitive prices.

Edible souvenirs include various types of rice-crackers (sembei), both sweet and savoury, vacuum-packed bags of pickles (tsukemono), and Japanese sweets (okashi) such as the eye-catching wagashi. Made of sweet, red-bean paste in various colours and designs, wagashi are the traditional accompaniment to the tea ceremony. Tea itself (ocha) comes in a variety of grades, often in attractive canisters, while sake, premium shōchū or Japanese whiskey are other great gift options, and often come in interesting-shaped bottles with beautiful labels.

Imported foreign-language books are expensive and only available in major cities. However, some locally produced English-language books are cheaper here than at home, if you can find them at all outside Japan. The best bookstores are Kinokuniya, Tower Books (part of Tower Records), Maruzen, Yūrindō and Junkudō, all of which stock imported newspapers and magazines as well as a variable selection of foreign-language books. Most top-class hotels have a small bookstore with a range of titles on Japan and a limited choice of imported fiction and journals.

Imported CDs and records are a lot easier to get hold of, alongside a mammoth local output of pop and rock. Major record stores such as Tower Records and HMV have a tremendous selection. Imported CDs typically cost under ¥2000, while CDs of foreign artists produced for the Japanese market, with translated lyrics and extra tracks, generally start in the region of ¥2300.

Japan’s most prestigious department stores are Isetan, Mitsukoshi and Takashimaya, followed by the more workaday Seibu, Tōbu and Matsuzakaya. All of these big names have branches throughout Japan, and sell almost everything, from fashion, crafts and household items to stationery and toys. One floor is usually devoted to restaurants, while bigger stores may also have an art gallery, travel bureau, ticket agent and a currency-exchange desk, as well as English-speaking staff and a duty-free service. Seasonal sales, particularly those at New Year and early July, can offer great bargains.

Japan is a well-known producer of high-quality and innovative electrical and electronic goods. New designs are tested on the local market before going into export production, so this is the best place to check out the latest technological advances. The majority of hi-tech goods are sold in discount stores, where prices may be up to forty percent cheaper than at a conventional store. Akihabara, in Tokyo, is the country’s foremost area for electronic goods, but in every major city you can buy audio equipment, computers, software and any number of ingenious gadgets at competitive prices.

Similarly, Japanese cameras and other photographic equipment are among the best in the world. Shinjuku, in Tokyo, is the main centre, where you can pick up the latest models and find discontinued and secondhand cameras at decent prices.

Before buying anything, compare prices – many shops are open to bargaining – and make sure the items come with the appropriate voltage switch (Japanese power supply is 100V). It’s also important to check that whatever you buy will be compatible with equipment you have at home, if necessary. For English-language instructions, after-sales service and guarantees, stick to export models, which you’ll find mostly in the stores’ duty-free sections, but bear in mind they may not be any cheaper than you would pay at home.

Top Japanese labels such as Issey Miyake, Yohji Yamamoto, Comme des Garçons and Evisu jeans are worn by fashionistas around the world, but there are also plenty of up-and-coming designers and streetwear labels to discover in Japan. The epicentre of chic is Tokyo’s Omotesandō and the surrounding Aoyama and Harajuku areas. If you want to check out the latest designers and labels, such as Jun Takahashi, Tsumori Chisato and Yanagawa Arashi, then head to the boutiques here and in trendy Daikan’yama and Naka-Meguro, or hit town during Tokyo Fashion Week (w www.jfw.jp) held twice a year. Kyoto also has an interesting fashion scene (see Textiles and fashion).

Finding clothes that fit is becoming easier as young Japanese are, on average, substantially bigger-built than their parents, and foreign chains tend to carry larger sizes. Shoes, however, are more of a problem. While stores stock larger sizes nowadays, the range is still pretty limited – your best bet is to try a large department store.

The regular outdoor antique and flea markets of Tokyo and Kyoto, usually held at shrines and temples, are great fun to attend. You need to get there early for the best deals, but you’re likely to find some gorgeous secondhand kimono, satin-smooth lacquerware or rustic pottery, among a good deal of tat. Flea markets are great also for stocking up on inexpensive clothes and household items.

The comeback of the kimono

In Japan kimono are still worn by both sexes on special occasions, such as weddings and festival visits to a shrine. But as the demand for high-class kimono, such as those made by the craftspeople of Kyoto, declines – a result of the falling birth rate and Japan’s ageing population – the one bright spot for the industry is the trend to adapt old kimono to new uses. Increasing numbers of fashion-conscious young women have taken to wearing a kimono like a coat over Western clothes or coordinating it with coloured rather than white tabi (traditional split-toed socks). At the same time, fashion designers are turning to kimono fabrics and styles for contemporary creations.

Few visitors to Japan fail to be impressed by the beauty and variety of kimono available, and every department store has a corner devoted to ready-made or tailored kimono. Ready-made versions can easily cost ¥100,000, while ¥1 million for the best made-to-measure kimono is not uncommon. Much more affordable secondhand or antique kimono can be found in tourist shops, flea markets or in the kimono sales held by department stores, usually in spring and autumn. Prices can start as low as ¥1000, but you’ll pay more for the sumptuous, highly decorated wedding kimono (they make striking wall hangings), as well as the most beautifully patterned obi, the broad, silk sash worn with a kimono. A cheaper, more practical alternative is the light cotton yukata, popular with both sexes as dressing gowns; you’ll find them in all department stores and many speciality stores, along with happi coats – the loose jackets that just cover the upper body. To complete the outfit, you could pick up a pair of zōri, traditional straw sandals, or their wooden counterpart, geta.

If you want to try the full kimono look, you’ll find that most of the big hotels have a studio where you can dress up and have your photo taken (typically around ¥10,000–15,000), while some guesthouses also offer the opportunity. The most popular place to don kimono is, of course, Kyoto. Men can get in on the act, too, dressing up in what is called “samurai” style (around ¥5000), though the male kimono is much less florid in design than the female version, and is usually in muted colours such as black, greys and browns. 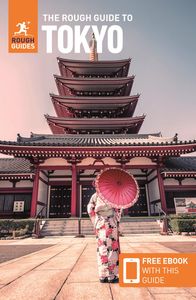