The sheer diversity of the Croatian islands ensures that there is something for everyone in the Adriatic, regardless of whether you’re a party animal, lotus-eater, young family or a combination of all three. Jonathan Bousfield, author of The Rough Guide to Croatia, picks out his top ten. 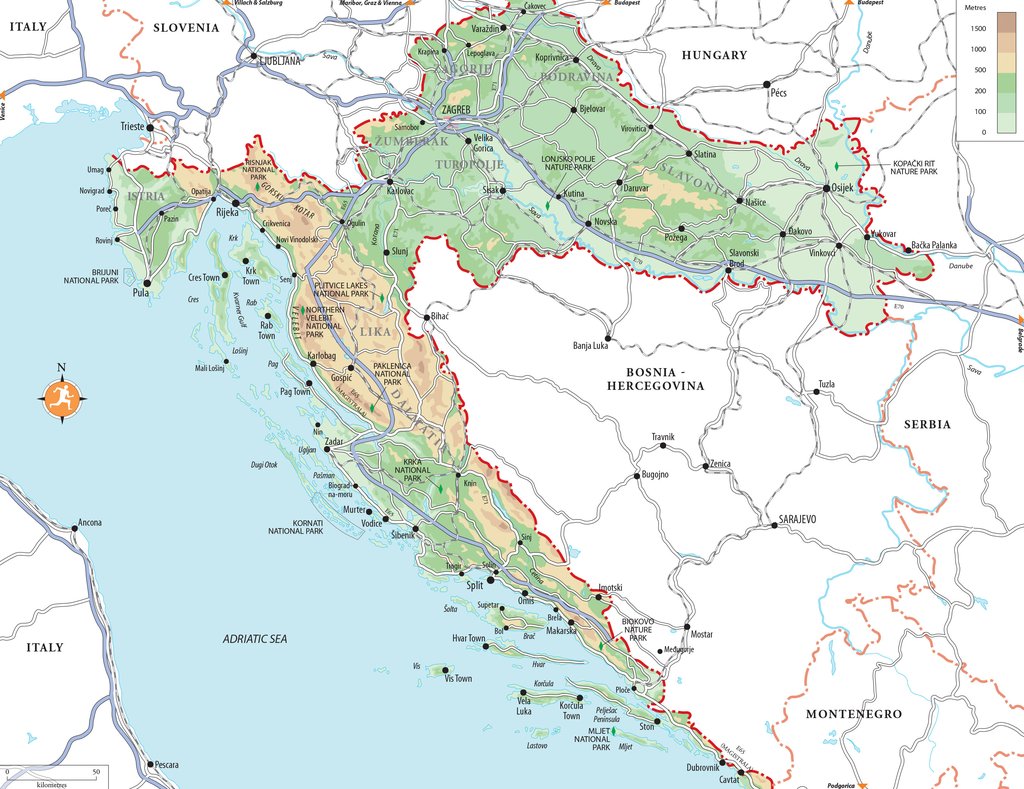 Susak: the island for kite flyers

One for the true connoisseur of Mediterranean getaways, this small island just off the coast of its larger neighbour Lošinj is largely made up of sand, its crumbly, ochre-coloured cliffs covered in ferns, wild fennel and soaring bamboo-like grasses. Criss-crossed by footpaths, it’s a blissfully easy island to explore, and the beaches are quite simply superb. Susak is also home to the annual Air and Kite Festival, a celebration of the kite-flyer’s art that also features intimate, everybody-welcome after-parties.

Rab: the island for buckets and spades

In a country that doesn’t have much in the way of classic sandy beaches, Rab is very much the odd one out of the Croatian islands. Most famous of its golden strands is Veli mel, a broad shallow bay that’s packed with paddling families from June to September. If splashing around with the crowd isn’t your thing, there is a sequence of wilder, uncommercialized sandy beaches lining Rab’s heavily indented northern shore. Best-known of these is Sahara, a bay reserved for naturists, although there are plenty of equally inviting coves on either side. Attitudes to clothing are fairly relaxed wherever you are, and views of the mountainous mainland only add to the raw natural feel.

Inspired by our list of the best Croatian island getaways? Try our new tailor-made travel service and enjoy a fully personalised trip planned by a local expert.

Silba: the island for Arcadians

When it comes to sea-lapped Shangri-las with no traffic and no hotels, kidney-shaped Silba is as perfect as they come. Not only are there no cars on the island, a ban on bicycles from mid-July to late August serves to preserve the island’s pedestrian pace. Strolling along maquis-lined country lanes in search of untamed beaches is the only adrenalin sport you are likely to encounter here. Silba’s permanent population of about 300 is swelled tenfold in summer, when independent travellers from all over the country come to enjoy the island’s uniquely relaxing Arcadian vibe. Fregadon is one of the Adriatic’s best B&Bs.

Murter: the island for festivals

Murter’s quiet, chilled-out reputation was somewhat turned on its head by the arrival of the Garden organization in 2012. Setting up shop in a bay near the town of Tisno, the Garden is home not just to the celebrated Garden Festival itself in early July, but also a string of other events (Electric Elephant, Soundwave, Suncébeat and Stop Making Sense) that have helped turn this corner of the Adriatic into one long summertime party. And what’s more, Murter’s easy-going nature hasn’t been significantly ruffled by all this activity – the Garden site is quite secluded, and the island’s olive groves, cute ports and secretive coves remain just as charming as before.

Šolta: the island for hiking and cycling

Despite being the nearest island to the port of Split, Šolta remains totally absent from the package-tourist map. Small, compact and not dramatically mountainous, it’s ideal for walking and cycling, especially once you get away from the main roads. Best way to explore is to take to the little-travelled trails of the unspoiled interior, heading through half-forgotten, Kasbah-like villages of stone houses roofed with thick stone slabs. The picturesque harbour of Maslinica, a blissful blend of unspoiled fishing village and chic yachting berth, could be the Adriatic’s best-kept secret.

Hvar (1): the island for hedonists

From the gossip pages to the travel magazines, Hvar has long been the global media’s favourite of the Croatian islands, a status it shows no sign of losing in 2013. Hvar Town rivals Dubrovnik in terms of its architectural glories and is equal in the glamour stakes too, with paparazzi roving the Riva to see who is transiting from luxury yacht to cocktail bar. When drinking-up time is called in the town itself, water taxis convey revellers to idyllic offshore islands, where beach-bar frolics continue until breakfast.

Hvar (2): the island for families

If Hvar Town is the celebrity magnet, the rest of the island represents the other side of the Adriatic coin. Laid back and full of charm, it remains robustly popular with those who want a piece of the Mediterranean that is family-oriented, unspoiled and affordable. Towns like Stari Grad, Jelsa and Vrboska boast a warren of old stone houses and an unhurried, fishing-village feel. Ruggedly unspoiled and pitted with a wealth of bays and coves, the island still has what it takes to enchant the seclusion-seeker.

Vis: the island for foodies

A magnet for independent travellers and lotus-eating Zagreb folk, Vis is one of the Croatian islands that combines unspoiled beauty with seriously good restaurants and some decidedly unique local delicacies. The local waters represent some of the richest fisheries in the Adriatic, and it’s no wonder that Vis’s restaurants offer some of the freshest lobster in the Mediterranean. In addition, establishment like Pojoda, Val and Kantun rustle up roasts and stews that are based on old-school recipes not found elsewhere. The island also boasts its very own fast-food staple in the shape of the pogača od srdele (anchovy pasty), a seriously fishy snack that will have you rushing back to the local bakery for more.

Proizd: the island for sunbathers

One of the most fantastic places to sunbathe in the whole of Dalmatia, the sloping-rock beaches of Proizd island will appeal to anyone who likes the idea of spreading their towel over a dramatic geological feature. It’s actually an islet rather than island in its own right, reached by taxi boat from the port of Vela Luka on Korčula. Proizd’s “beaches” are certainly unique, consisting of stone plates shelving into turquoise waters. The island is at its most beautiful in evening, when the rocks change colour from grey to gold as the sun slowly descends. The Mediterano agency can book rooms and apartments in and around Vela Luka.

Mljet: the island for romantics

Most people visit this national-park island as a day-trip from Dubrovnik, and miss out on the benefits of a longer visit to one of the best Croatian islands. With village accommodation, nature walks and a multitude of quiet bays, it’s a great place to get romantic. The island remains blissfully unspoiled, full of bicycle-pedalling and kayak-paddling trippers during the daytime, startlingly quiet and stress-less at night. According to legend, Odysseus holed up here for seven years with the nymph Calypso, and it’s not difficult to see why he found it so hard to leave. The family-run Boutique Accommodation Mljet offer superb rooms and apartments in an old stone house.

Which is your favourite Croatian island and why?