Your Europe itinerary: 10 routes to explore the continent

You can’t expect to fit everything Europe has to offer into one trip and we don’t suggest you try. For those taking a big, extended trip around the continent you could join a few countries together.

Each of these itineraries could be done in two or three weeks if followed to the letter but don’t push it too hard – with so much to see and do you’re bound to get waylaid somewhere you love or stray off the suggested route.

For a complete guide to exploring the region and up-to-date recommendations of the best hotels, hostels, activities and more, buy the full guide here.

Where else to begin but London (1) – one of the world’s greatest but most expensive cities. While your wallet is still intact move on to the storied grounds of Oxford (2) before heading to Snowdonia (3), where the Welsh mountains provide excellent hiking.

Soak up some history in the medieval streets of York (4), then make the trip north to stunning Edinburgh (5). Find your inner Braveheart in the Scottish Highlands (6) and fit in an unforgettable hike, climb, or ski while you’re at it.

Pop across the North Channel to Belfast (7), but be sure not to miss the nearby Giant’s Causeway – one of Europe’s great natural wonders. Grab a perfect pint of Guinness in Dublin (8), then wind down on the windswept beaches of Ireland’s West Coast (9). 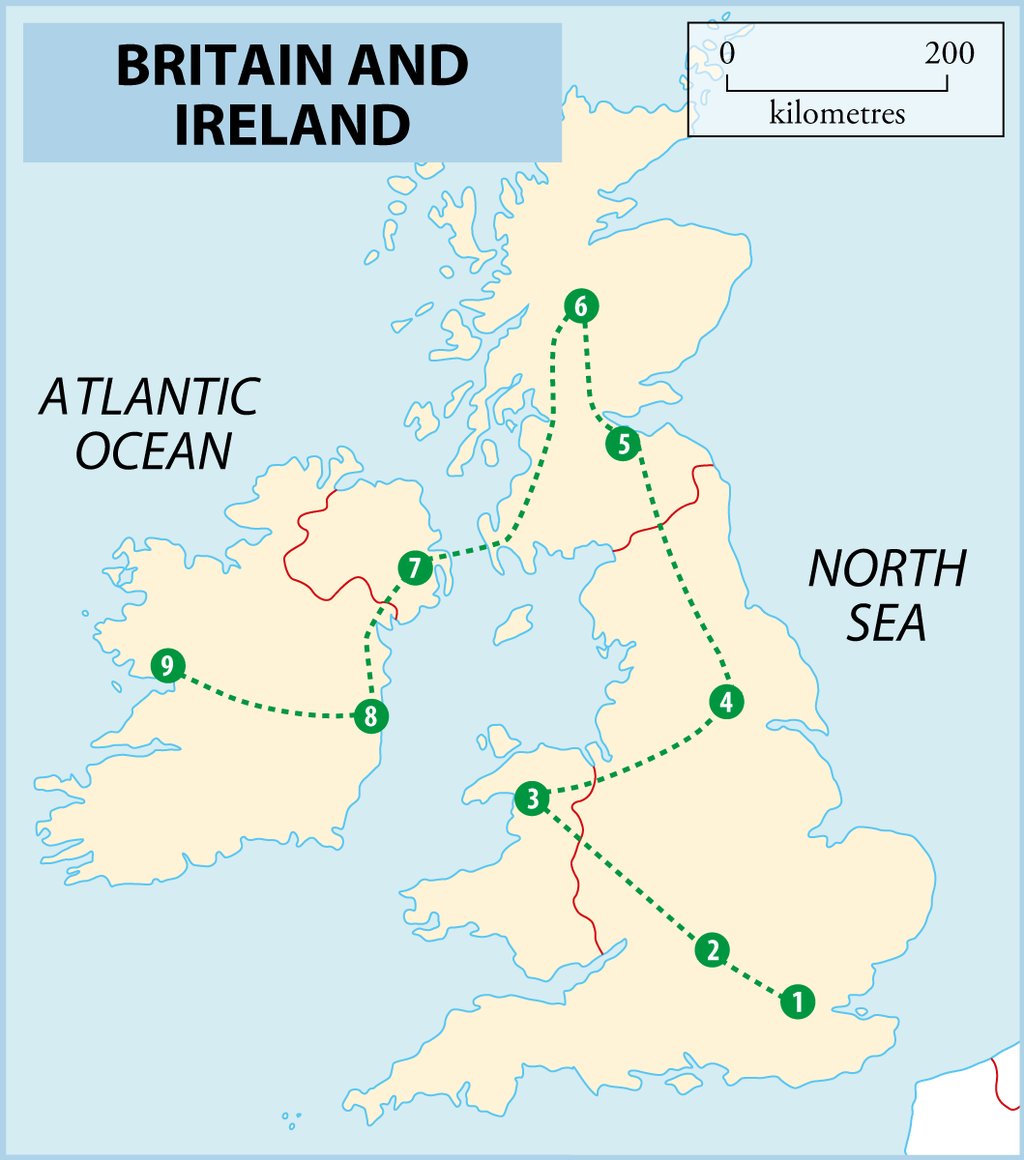 Start in Paris (1), Europe’s most elegant capital, then venture off to the châteaux and prime vineyards of the Loire Valley (2). Move south to beautiful Bordeaux (3), which boasts bustling city life and some of Europe’s finest surfing beaches to boot.

Head south the peaks of the Pyrenees (4) before taking a trip through Southern France to the Côte d’Azur (5). Don’t miss the magic of Corsica (6), a true adventure playground, or traditional cooking in Lyon (7), the country’s gastronomic capital.

Try your luck skiing and climbing in the Alps (8), and end by relaxing riverside in laid-back Zürich (9). 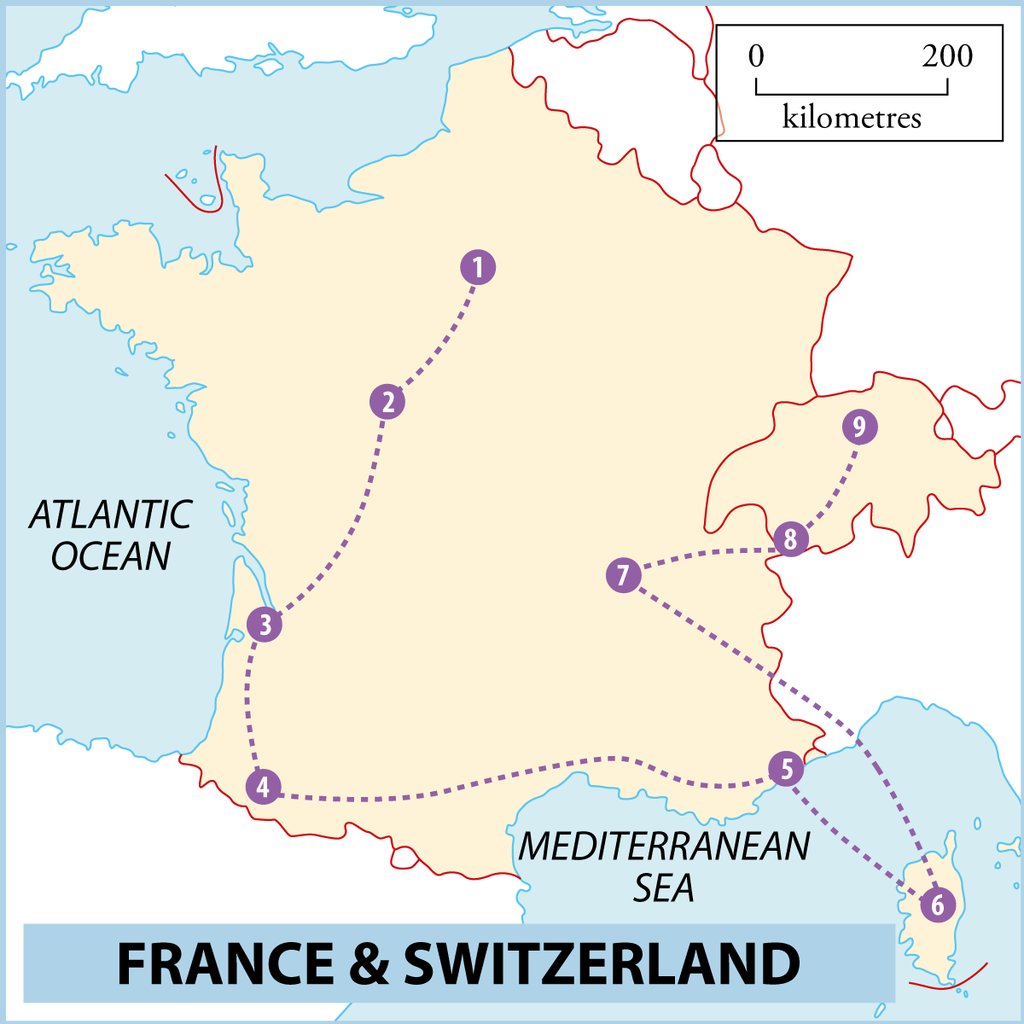 Kick off in Amsterdam (1) before enjoying more atmospheric canals and beautiful buildings in Bruges (2). Cologne’s (3) spectacular old town is a perfect first stop in Germany, but be sure to head north soon after for the vast port and riotous bars of Hamburg (4).

Few cities can compete with the style and youthful energy of Berlin (5), while Dresden (6) has also become a favourite backpacker hangout. Then head south to Munich (7), where Bavaria’s capital boasts everything from snowy scenery to beer-fuelled Oktoberfest.

Cross over the boarder to

and hit the slopes or the Mozart trail in scenic

(8), and conclude this itinerary among the palaces, museums, cafés and boulevards of 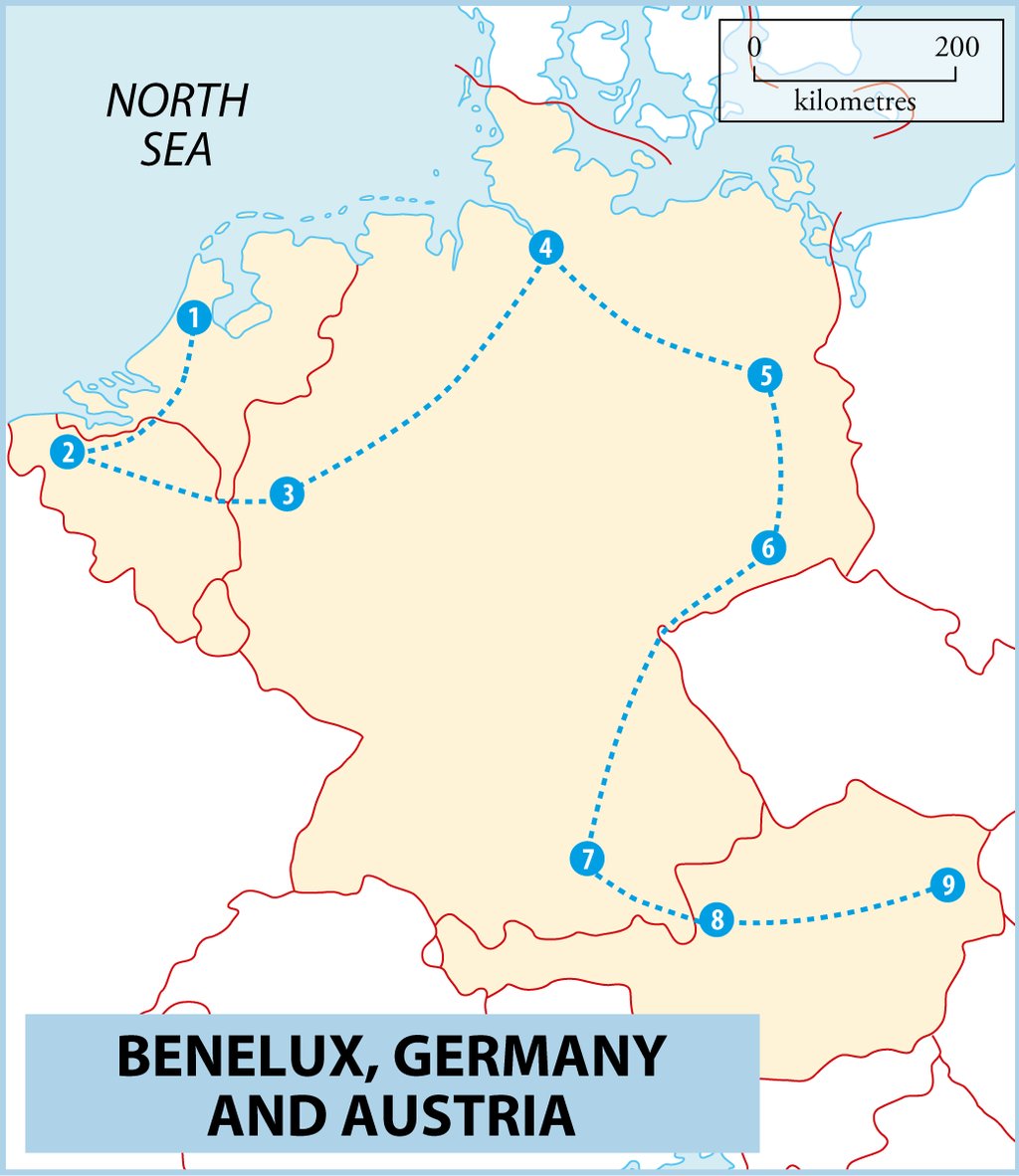 Begin in the Basque capital of Bilbao (1), Spain’s friendliest city and home of the Guggenheim. Then it’s on to the city beaches, late-night bars and enchanting old town of Barcelona (2). Ibiza's (3) nightclubs are famous the world over, but its pockets of peace and quiet are worth the trip alone.

Gobble tapas and dance the night away in Madrid (4) before heading west for the countless port lodges of Porto (5). Cruise down the Atlantic coast to the historic Portuguese capital of Lisbon (6), then make for the region of Andalucía (7), stopping in the cities of Seville and Granada as you venture further south.

If you catch a ferry across the Straits of Gibraltar to Morocco and set course for Fez (8), explore the medieval Moroccan city of labyrinth alleys, souks and mosques. Finish up in Marrakesh (9), a colourful city with a stunning backdrop of the Atlas Mountains. 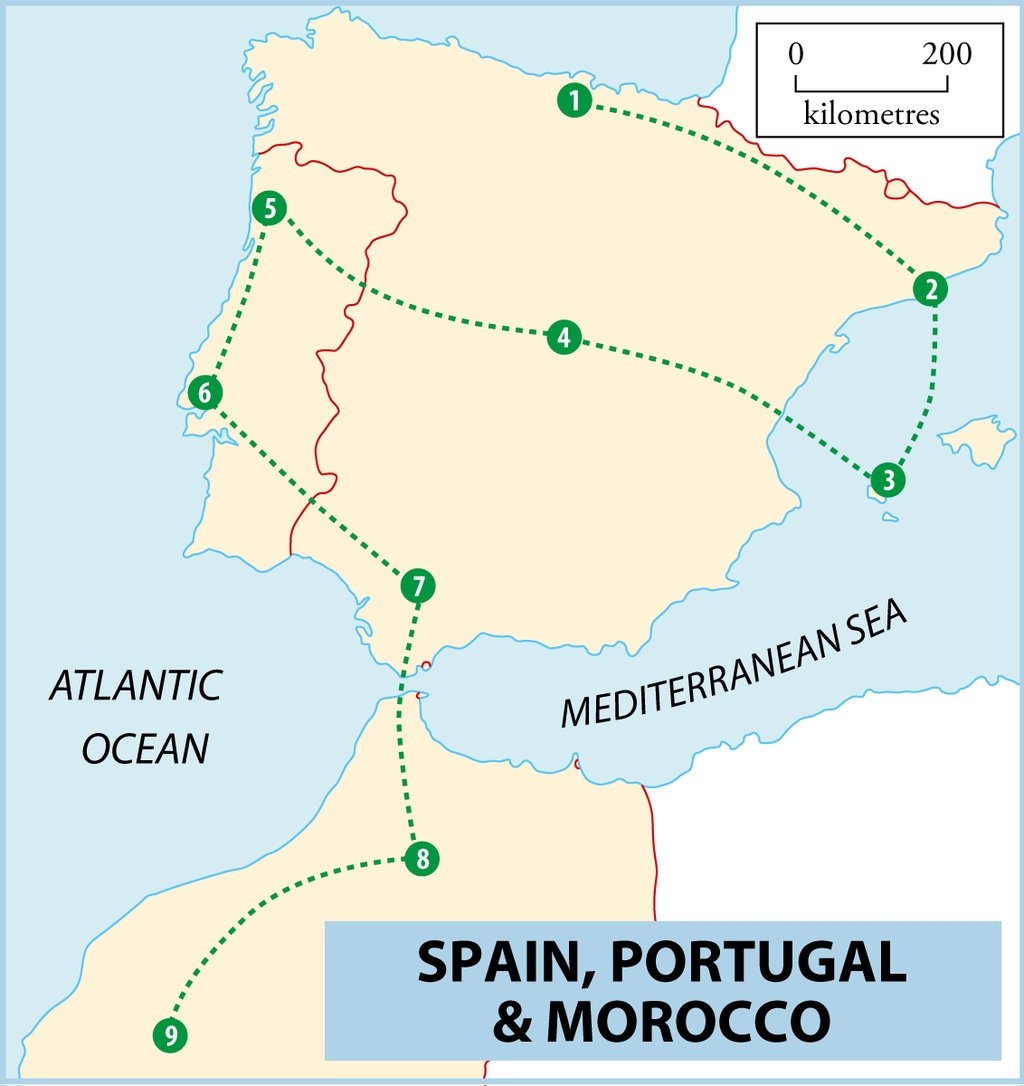 Start in Milan (1) for a little Prada, Gucci, and Leonardo da Vinci. Veer east to visit the world’s most beautiful city, Venice (2), then south to the foodie nirvana of Bologna (3). Glide onwards to Tuscany (4) where Florence and Siena make excellent bases to explore the region’s hill towns.

You can hardly “do” Europe and not see Rome (5), and there is truly no better place to eat pizza than in the crumbling yet attractive city of Naples (6). Experience a Roman town frozen in time at Pompeii (7), before sleeping in one of Matera’s (8) hand-carved caves.

Kick back in Sicily (9) on idyllic beaches beneath smouldering volcanoes, or enjoy the hectic pace of Palermo, one of Italy’s most in-your-face cities. 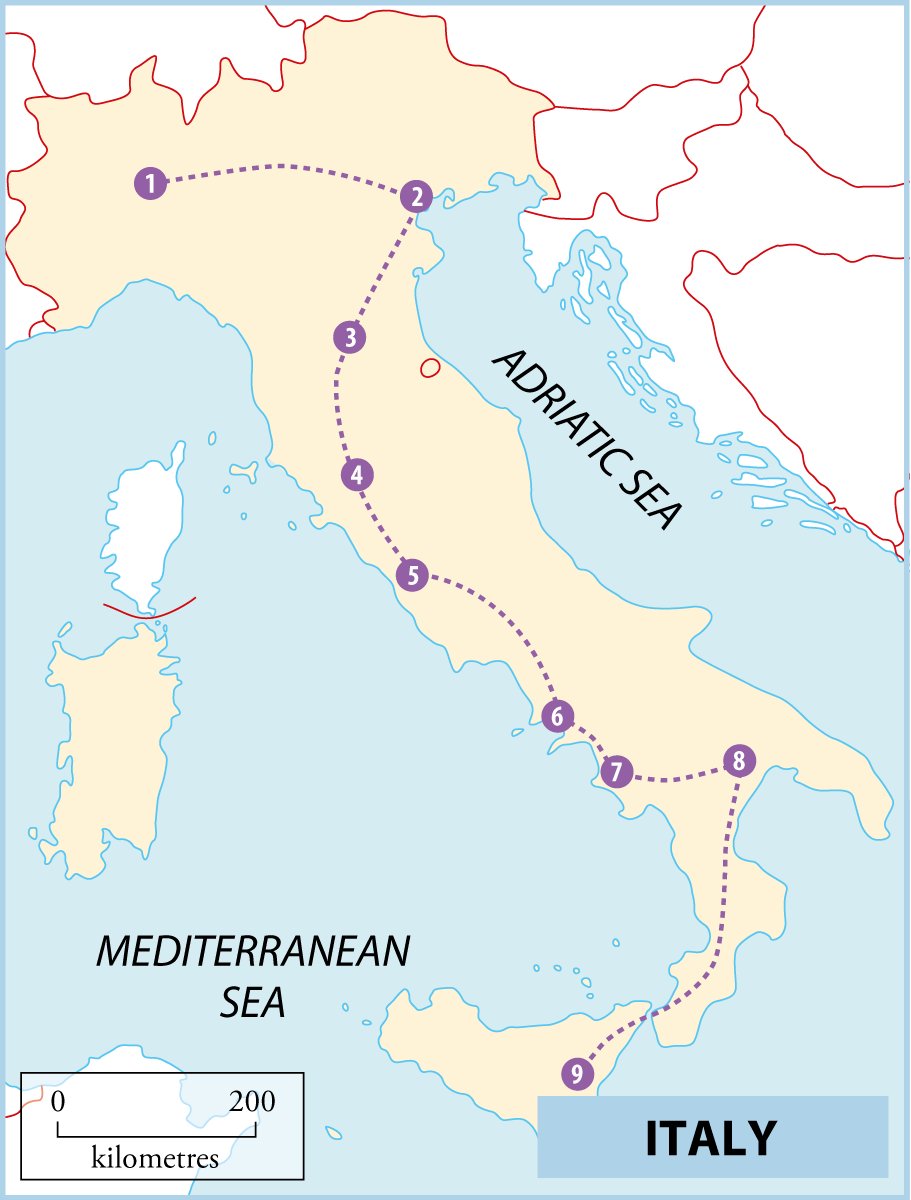 Arty and atmospheric Kraków (3) shouldn’t be missed, and neither should a trip to charming cafés of L'viv (4). Leave cities behind for the majestic wilderness of Slovakia's Tatra Mountains (4), then head back to civilisation and immerse yourself in Budapest (6) where you'll find two great cities in one.

Finish this itinerary up in Ljubljana (7); Slovenia’s capital is a perfectly formed pit stop between central Europe and the Adriatic if you’re eager to push on to the Balkans. 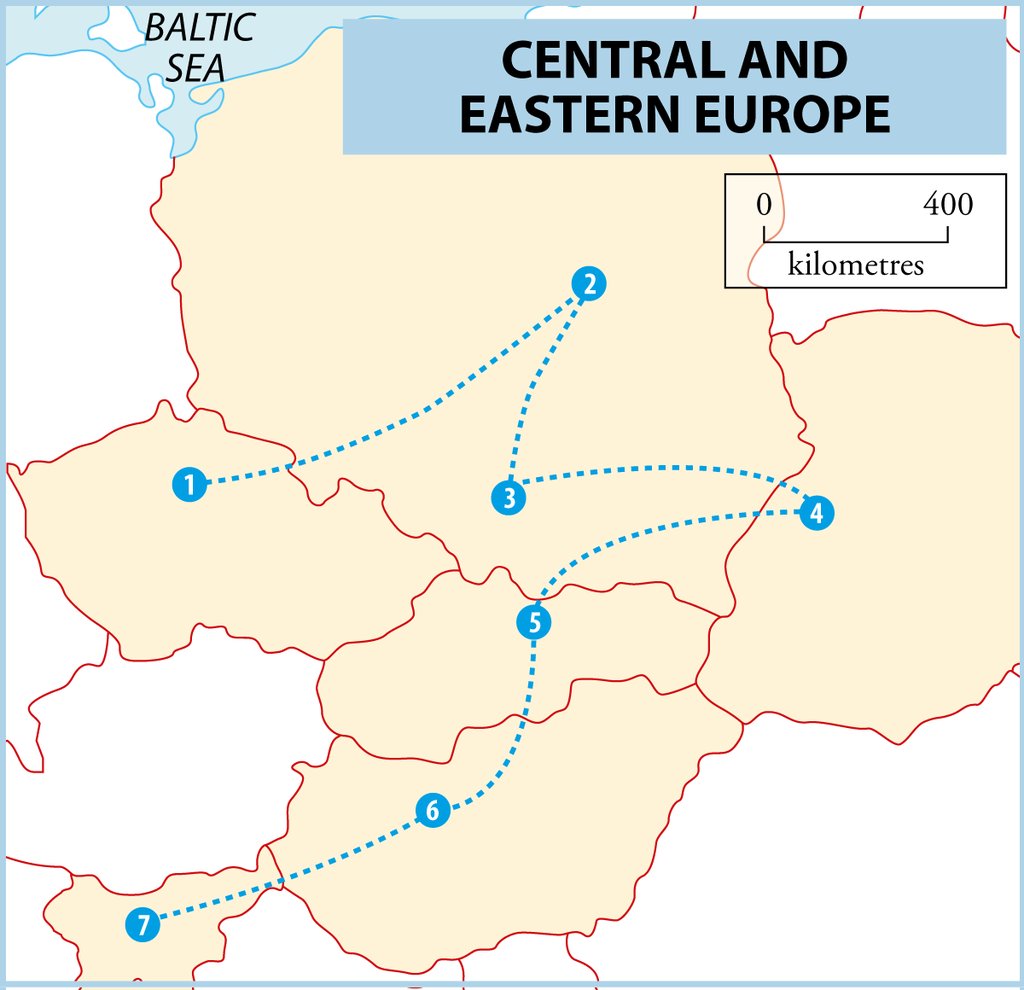 Start in the lively lanes of beautiful Copenhagen (1), and head north to Gothenburg’s (2) elegant architecture, fantastic nightlife and fully-functioning rainforest. A visit to Oslo (3) is worth the expense, but after a while you'll feel the pull of the Norwegian fjords (4).

The mild climate and wild scenery of the Lofoten Islands (5) should not be skipped, but neither should the reindeer, huskies and elusive Northern Lights of Lapland (6). Of course, no trip to Scandinavia would be complete without a stop in Stockholm (7).

If you’re travelling in summer, get to Gotland (8) – Sweden’s party island, buzzing with DJs and bronzed bodies on the beach. 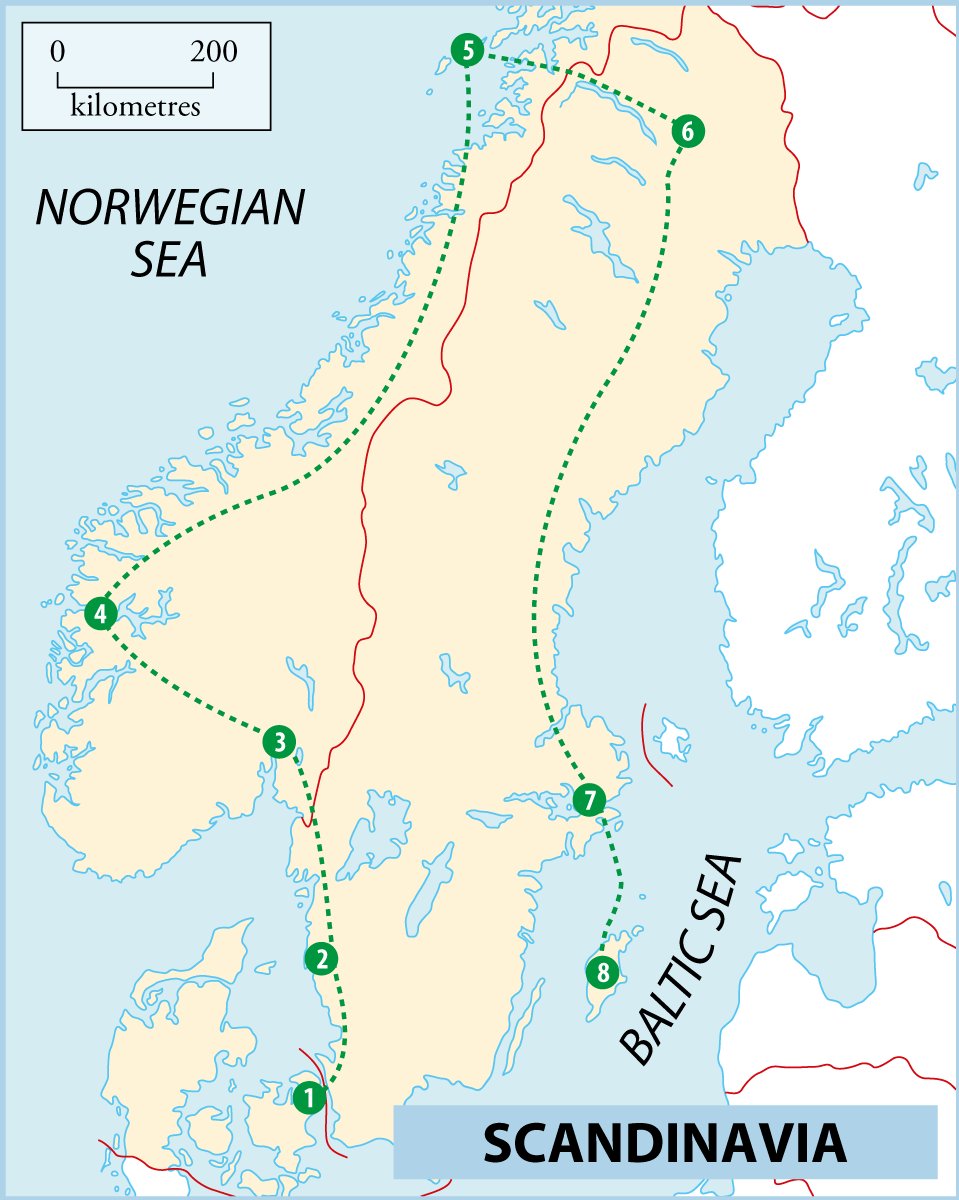 8. Russia and the Baltic Coast

Big, brash, expensive surreal – Moscow (1) is almost a nation in itself, and well worth a visit before moving on to the jaw-dropping architecture and priceless art collections of St Petersburg (2).

Head west to Helsinki (3), the proudly Finnish love child of Russian and Swedish empires, then hop across the gulf to charming and beautifully preserved Tallinn in Estonia (4).

Latvia's cosmopolitan Riga (5) should not be missed, and when you need your nature fix go further south to the Curonian Spit (6), a strip of sand dunes and dense forest ideal for cycling and hiking. Wind this trip down in Vilnius (7), the friendliest and perhaps even the prettiest of all Baltic capitals. 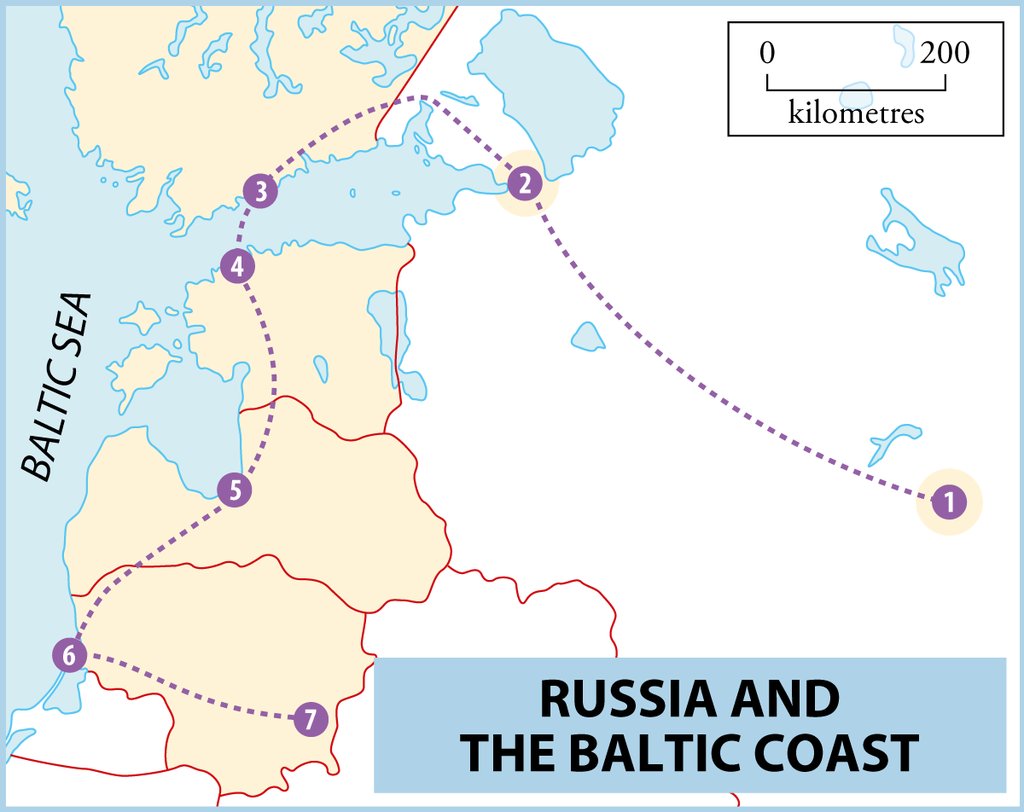 Start with a slew of cheap but delicious wine, watersports, and vitamin D on the Dalmatian coast (1), then move on to Europe’s war-scarred but most welcoming capital, Sarajevo (2).

History-steeped Dubrovnik (3) rivalled Venice in its day, and is an easy stop on the way to Budva (4), Montenegro’s star resort with unspoilt beaches and throbbing open-air bars. Head further south to Tirana (5) for charming architecture and urban exploration, before visiting the shimming shores of Ohrid’s (6) mountain-backed lake.

Be sure to check out the chilled vibe of Sofia (7), and the more upbeat buzz of Serbia’s hip capital: Belgrade (8). End this itinerary by discovering Transylvania (9) – you probably won’t find any vampires, but you will find fairytale villages, colourful festivals, and wolf tracking in the Carpathians. 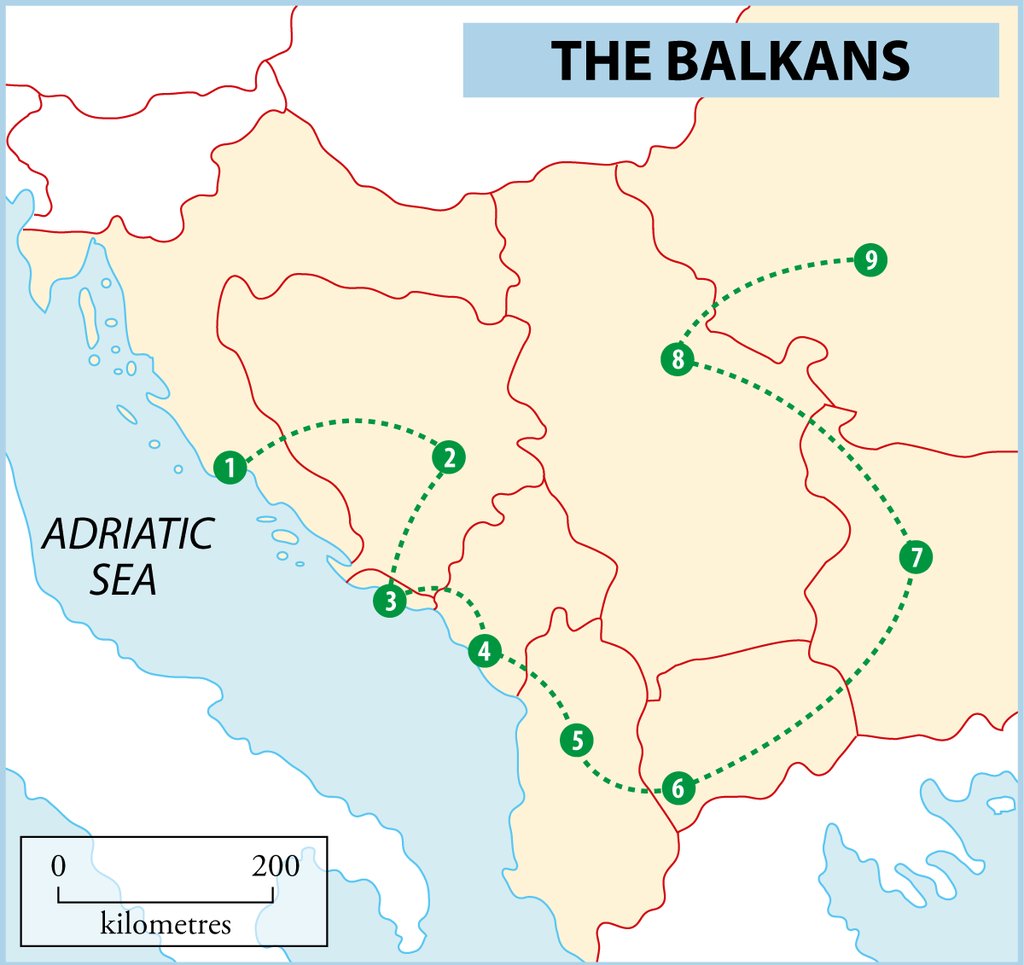 Begin by finding the perfect beach in Kefaloniá (1), and continue to Athens (2) for a sun set over the Parthenon. Sail first to the island of Íos (3) for partying backpackers and hippie-era charm, then on to Crete’s (4) Samarian Gorge.

Get to the Turkish mainland for a visit to the remarkably preserved temples, mosaics, and baths in Ephesus (5) before mountain biking, paragliding, or diving in Kaş (6).

Then venture east to Cappadocia’s (7) volcanic landscape and subterranean city, and wrap up among the bazaars, hammams, and surprisingly hectic nightlife in Istanbul (8). 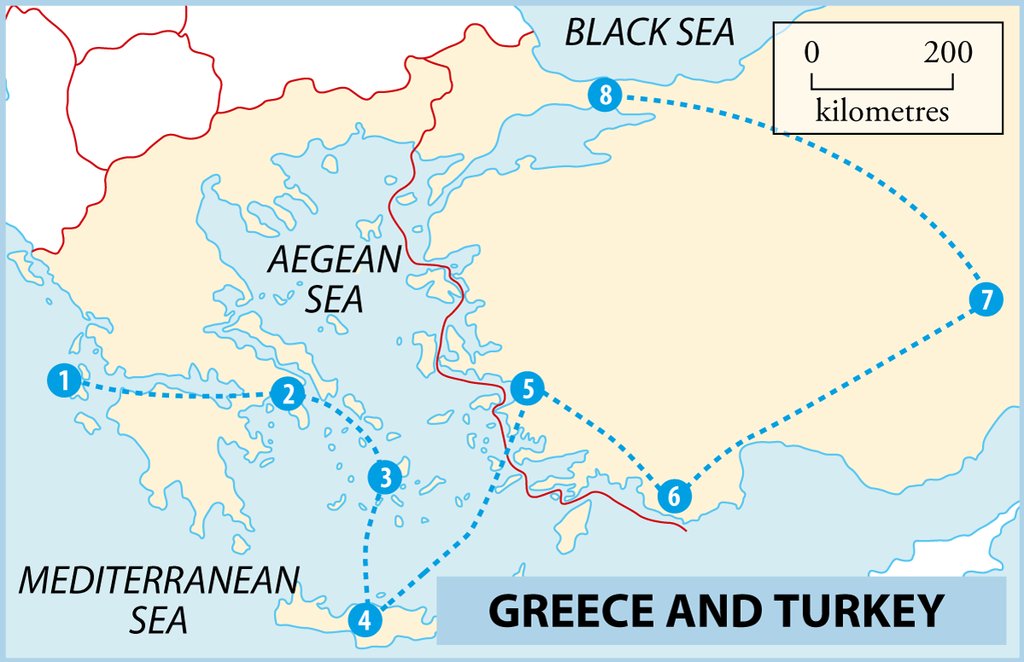 Explore more of Europe with the Rough Guide to Europe on a Budget. Compare flights, find tours, book hostels and hotels for your trip, and don’t forget to purchase travel insurance before you go.