IBIZA, or Eivissa in Catalan, is an island of excess – beautiful, and blessed with scores of stunning cove beaches and dense pine forests. Nevertheless, it’s the islanders (eivissencs) and their visitors who make it special. Ibiza has long attracted hedonistic characters and wealthy bohemians, and the locals remain determinedly blasé about the mullet-haired fashionistas and celebrities who flock to the island today.

For years, Ibiza was the European hippie escape, but nowadays it’s the extraordinary clubbing scene that most people come here to experience. The island can lay a strong claim to being the globe’s clubbing capital, with virtually all of the world’s top house DJs and many more minor players performing here during the summer season. However, visit between October and May, and you’ll find a much more peaceful island – just one club (Pacha) and a few funky bars remain open through the winter.

Ibiza Town, the capital, is the obvious place to base yourself: only a short bus ride from two great beaches – Ses Salines and Es Cavallet – and crammed with bars, restaurants and boutiques. The town of Sant Antoni is, for the most part, a sprawling concrete mass of seedy bars and unappealing restaurants, and is best avoided beyond a few choice bars and clubs. The more pleasant town of Santa Eulària is a good base for exploring the north of the island. Around the entire shoreline, you’ll find dozens of exquisite cove beaches (calas), many all but deserted even in high season, though you’ll need your own transport to reach the best spots. Inland, the scenery is hilly and thickly wooded, dotted with a series of tiny hamlets.

Book tickets and tours for Ibiza

The Carthaginians, who founded Ibiza Town in about 654 BC, transformed the island into a major trading port, with salt the main export. The Romans arrived in 123 BC and the island continued to prosper. After the fall of the Roman Empire, Ibiza was conquered by the Moors in the ninth century, and their five-hundred-year reign is still evident in the island’s architecture and traditional dress. But thereafter a gradual decline set in, and it wasn’t until Beatniks discovered the island in the 1950s that Ibiza began to reinvent itself as one of the most chic locations in the Mediterranean.

Today more than four million tourists flock to the much-revered “white isle” every year. However, Ibiza’s tourism-driven prosperity has seen more and more coastline consumed by rampant development. The balance between keeping the tourists coming and maintaining the island’s natural allure is keenly felt by the islanders but, for now at least, it’s not hard to find a pristine cove or a quiet forested trail if you make the effort.

Some of the globe’s most spectacular clubs are spread across the southern half of Ibiza. Clubs cost around €30–70 to get in, are open between midnight and 6am – try to blag a guest pass from one of the bars. The Discobus (midnight–6.30am; €3) ferries partygoers from Ibiza Town to the island’s major clubs, leaving from the main port.

IBIZA TOWN (Ciutat d’Eivissa) is easily the most attractive settlement on the island. Colossal medieval walls guard the maze of cobbled streets of the UNESCO-listed old town quarter of Dalt Vila. The walls reach a dramatic climax at the main archway entrance, the imposing Portal de ses Taules. Just beyond is the elegant Plaça de Vila, which is lined with restaurants and cafés and makes a delightful setting for some tapas or a meal. It’s well worth the walk up the steep, winding streets to the cathedral, if only to enjoy the wonderful views out over the harbour.

During summer nights, the whitewashed streets of the port area are packed with people darting between chic boutiques, street market stalls and hip bars. In winter, things are much more peaceful, and the focus of activity shifts to the area around the graceful boulevard Passeig de Vara de Rey.

The east coast of Ibiza

Heading northeast from Ibiza Town, it’s 15km to SANTA EULÀRIA DES RIU, a pleasant town with a plush marina but few obvious sights. Though it does boast an attractive church – a fortified whitewashed sixteenth-century construction perched on a hilltop to the west of the town centre, SANT CARLES, 7km to the north, is an agreeable one-horse village.

East of Sant Carles the road passes through burnt-red fields of olive, almond and carob trees to several almost untouched beaches. Cala Llenya, a broad sandy cove with sparkling waters, is the nearest, and is popular with families. Tiny Cala Mastella, 2km farther north, is a supremely peaceful spot, with a diminutive sandy beach and crystal-clear sheltered water. Just north of Cala Mastella, Cala Boix is another stunning sandy cove, a little larger and more exposed.

Continuing north from Cala Boix, the coastal road follows an exhilarating, serpentine route above the shore, through thick pine forests and past the lonely nudist beach of Aigües Blanques.

The north of Ibiza

Twenty kilometres from Ibiza Town, SANT JOAN is a pretty hilltop village home to a typically minimalist, whitewashed Ibizan church, and a sprinkling of café-bars. North of the village are some wonderful beaches, especially remote Cala d’en Serra, a tiny, exquisite sandy cove, with turquoise waters perfect for snorkelling. Benirràs, 9km northwest of Sant Joan, is another beautiful bay, backed by high, wooded cliffs. This is one of Ibiza’s prime hippie-centric beaches – dozens gather here to burn herbs and pound drums to the setting sun on Sundays.

The next village to the west is SANT MIQUEL, where there’s an imposing fortified church, and a number of simple tapas bars – try Es Pi Ver for an inexpensive meal. The once astonishingly beautiful inlet at PORT DE SANT MIQUEL, 3km north of the village, has been badly mauled by the developers, but outside high season it’s not too packed here, and the sheltered bay is great for children.

The west and south coast of Ibiza

For years unchallenged at the top of Europe’s costa hooligania league table, the package resort of SANT ANTONI DE PORTMANY on the island’s west coast is trying hard to shake off its tarnished image. The high-rise concrete skyline and gritty British pubs of the “West End” aren’t at all enticing, but the Sunset Strip on the western side of town is an appealing place for a drink. Hordes of young British clubbers flock to San An for its plethora of bars within easy staggering distance.

Heading south of Sant Antoni, it’s just a few kilometres to some exquisite coves. Sheltered Cala Bassa gets packed with holidaying families in high season, but it does have a campsite, while the more exposed beach of Cala Conta is less crowded, and is a beautiful spot to while away an afternoon. The most beguiling beach in the Balearics, Cala d’Hort, is in the extreme southwest of the island, with a lovely quiet sand-and-pebble shoreline plus three good, moderately priced seafood restaurants. From the shore there are mesmeric vistas of Es Vedrà, an incisor-shaped 378-metre-high islet that’s revered by islanders and island hippies alike, and is the subject of various myths and legends – including a claim to be Homer’s island of the sirens.

Taking the scenic southern road to Ibiza Town you pass via SANT JOSEP, a pretty village with a selection of café-restaurants. Some 7km southwest of Sant Josep, Cala Jondal, is a popular pebble beach. 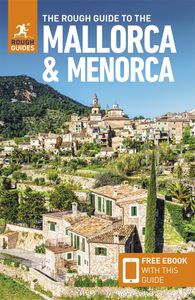