The most westerly part of North Wales, the Llŷn forms a cliff- and cove-lined finger of land that juts out south and west from Snowdonia, separating Cardigan and Caernarfon bays. Its hills taper along its spine, carrying an ancient route to Aberdaron, where pilgrims once sailed for Ynys Enlli (Bardsey Island). Most come to the Llŷn for its beaches, especially those of the south coast family resorts of Pwllheli and Abersoch, but Aberdaron is the star around here.

Nowhere in Wales is more remote and staunchly Welsh: the term Stryd Fawr is used instead of High Street, and in most local shops you’ll only hear Welsh spoken. The Llŷn is reached through one of the two gateway towns: Porthmadog, home to the private “dream village” of Portmeirion and terminus of the Ffestiniog Railway; or Caernarfon, where a magnificent fortress guards the mouth of the Menai Strait.

CAERNARFON, superbly set at the southern entrance to the Menai Strait, has a lot going for it. Its distinctive polygonal-towered castle is an undoubted highlight, the Welsh Highland Railway connects the town with the slopes of Snowdon and Porthmadog, and the modern marina development adds Galeri Caernarfon, a modest but interesting arts centre. The town walls are no match for Conwy’s, but there is some great accommodation nearby, making this a good base for exploring both sides of Snowdon, the Llŷn and even Anglesey.

In 1283, Edward I started work on Caernarfon Castle, the strongest link in his Iron Ring, a decisive hammer-blow to any Welsh aspirations to autonomy and the ultimate symbol of Anglo-Norman military might – it withstood two sieges by Owain Glyndŵr with a garrison of only 28 men-at-arms. As you enter through the King’s Gate, the castle’s strength is immediately apparent. Embrasures and murder holes between the octagonal towers face in on no fewer than five gates and six portcullises, and that’s once you have crossed the moat. Inside, the huge lawn gives a misleading impression as the wall dividing the two original wards, and all the buildings that filled them, crumbled away long ago. The towers are in a much better state, linked by an exhausting honeycomb of wall-walks and tunnels. The tallest is the Eagle Tower whose three slender turrets are adorned with eagle sculptures and give the best views of the town. The Northeast Tower houses the Prince of Wales Exhibition, just outside which is the slate dais that was used for Charles’s investiture in 1969.

In a region stuffed with wonderful views, PORTHMADOG, at the crook of the Cambrian Coast and the Llŷn, has some of the finest – up the Vale of Ffestiniog and across the estuary of the Glaslyn River to the mountains of Snowdonia. The bustling town itself makes little of its wonderful position, but it’s a good base for exploring. Wales’s heritage railway obsession reaches its apogee here with two fantastic lines – the peerless Ffestiniog Railway and the newly restored Welsh Highland Railway – and if steam trains don’t blow your whistle, you can head for the strange but wonderful Italianate folly of Portmeirion.

The Ffestiniog Railway ranks as Wales’s finest narrow-gauge rail line, twisting and looping up 650ft from the wharf at Porthmadog to the slate mines at Blaenau Ffestiniog, thirteen miles away. The gutsy little engines make light of the steep gradients and chug through stunning scenery, from broad estuarine expanses to the deep greens of the Vale of Ffestiniog, only fading to grey on the final approaches to the slate-bound upper terminus at Blaenau Ffestiniog. In the late nineteenth century the rail line was carrying 100,000 tons a year of Blaenau Ffestiniog slate, but after the collapse of the slate roofing industry the line was abandoned (in 1946) and fell into disrepair. Reconstruction of the tracks was complete by 1982.

Leaving Porthmadog, trains cross The Cob and then stop at Minffordd, a mile from Portmeirion.

In 2011 the narrow-gauge Welsh Highland Railway once again connected Porthmadog with Caernarfon, 25 miles away. One of the most scenic lines in a land packed with charming railways, it rises from sea level to 650ft along the southern flank of Snowdon and passes a gorgeous river estuary, oak woods and the Aberglaslyn Gorge, where the line hugs the tumbling river.

The full Porthmadog–Caernarfon round trip gives you a full five hours on the train but only an hour in Caernarfon. Alternatively, ride to Beddgelert then walk down the Aberglaslyn Pass to Nantmor (1hr) and catch the train back to Porthmadog from there.

Best known as “The Village” in the 1960s cult British TV series The Prisoner, the Italianate private village of PORTMEIRION, set on a small rocky peninsula in Tremadog Bay, was the brainchild of eccentric architect Clough Williams-Ellis. He dreamed of building an ideal village using a “gay, light-opera sort of approach”, and the result is certainly theatrical: a stage set with a lucky dip of buildings arranged to distort perspectives and reveal tantalizing glimpses of the seascape behind.

In the 1920s, Williams-Ellis bought the site and turned an existing house into a hotel, the income from this providing funds for his “Home for Fallen Buildings”. Endangered structures in every conceivable style from all over Britain and abroad were brought here and arranged around a Mediterranean piazza: a Neoclassical colonnade from Bristol, Siamese figures, a Jacobean town hall, a campanile and a pantheon. Painted in shades of turquoise, ochre and buff yellows, it is continually surprising, with hidden entrances and cherubs popping out of crevices – eclectic yet somehow all of a piece.

More than three thousand visitors a day come to ogle in summer, when it can be a delight; fewer in winter, when it seems just bizarre. 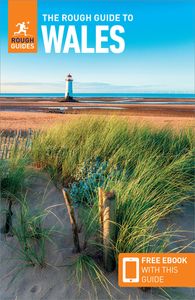