The tourist capital of Vietnam’s mountainous north, Sa Pa, or Sapa, is perched dramatically on the western edge of a high plateau, facing the hazy blue peak of Fan Si Pan, and is surrounded by villages of ethnic minorities, particularly the Red Dao and Black Hmong. Its refreshing climate and almost alpine landscape struck a nostalgic chord with European visitors, who travelled up from Lao Cai by sedan chair in the early twentieth century, and by 1930 a flourishing hill station had developed, complete with tennis court, church and over two hundred villas. Nowadays only a handful of the old buildings remain, the rest lost to time and the 1979 Chinese invasion, as well as those involved in the current hotel development spree. Although height restrictions are finally being enforced on new buildings, the damage has already been done and Sa Pa’s days as an idyllic haven in the hills have been concreted over. However, what the modern town lacks in character is more than compensated for by its magnificent scenery, and it makes an ideal base for tours of the area’s varied collection of minority villages.

The people of Sa Pa

Sa Pa itself is ethnically Vietnamese, but its shops and market serve the minority villages for miles around. Every day is bright and lively in Sa Pa, with the women coming dressed in their finery – the most striking are the Red Dao, who wear scarlet headdresses festooned with woollen tassels and silver trinkets. Black Hmong are the most numerous group – over a third of the district’s population – and the most commercially minded, peddling their embroidered indigo-blue waistcoats, bags, hats and heavy, silver jewellery at all hours. In fact, young Hmong girls can often be seen walking hand in hand with Westerners they have befriended prior to making their sales pitch. By contrast, the Red Dao, another common group here, are generally shy about being photographed, despite their eye-catching dress.

Sa Pa’s invigorating air is a real tonic after the dusty plains, but cold nights make warm clothes essential throughout the year: the sun sets early behind Fan Si Pan, and temperatures fall rapidly after dark. During the coldest months (Dec–Feb), night temperatures often drop below freezing and most winters bring some snow, so it’s worth finding a hotel room with heating. Often a thick fog straight out of a Sherlock Holmes novel can creep over the whole town, lending a spooky feel to the market. You’ll find the best weather from September to November and March to May, though even during these months cold, damp cloud can descend, blotting out the views for several days.

What initially attracted visitors to Sa Pa was the weekend market, which is when it’s at its busiest, though it’s now a bustling place on weekdays too. These days it’s housed in a concrete eyesore, a far cry from the original Saturday "love market" where the local ethnic minorities would come to court their sweethearts. Plenty of minority people still turn up to peddle ethnic-style bags and shirts to trekkers, though more authentic market fairs can be found on the other side of the Red River on Saturdays at Can Cau and on Sundays in Bac Ha.

The small Sa Pa Culture Museum features video presentations and wall displays about Sa Pa’s history and the lifestyles of the local hill tribes, but exhibits are dimly lit and the captions are unclear – you might not learn much here. Other exhibits include a mock-up of a Hmong wedding ceremony and a run-down of the social architecture of ethnic minority groups.

To get in shape for a trek through the valley, try taking a short but steep hike to the top of Ham Rong Mountain, which overlooks the town from an elevation of around 2000m. Stone steps lead up to the peak where there are fine, panoramic views on a clear day. The pathway is lined with potted orchids, landscaped gardens and depictions of cartoon characters like Mickey Mouse. To find the entrance to the park, follow Ham Rong to the north of the church in the town centre.

To the top of Vietnam - Mount Fan Si Pan

Vietnam’s highest mountain, Fan Si Pan (3143m) lies less than 5km as the crow flies from Sa Pa, but it’s an arduous three- to five-day round trip on foot. The usual route starts by descending 300m to cross the Muong Hoa River, and then climbs almost 2000m on overgrown paths through pine forest and bamboo thickets, before emerging on the southern ridge. The reward is a panorama encompassing the mountain ranges of northwest Vietnam, south to Son La Province and north to the peaks of Yunnan in China. Although it’s a hard climb, the most difficult aspect of Fan Si Pan is its climate: even in the most favourable months of November and December it’s difficult to predict a stretch of settled clear weather and many people are forced back by cloud, rain and cold.

A guide is essential to trace indistinct paths, hack through bamboo and locate water sources if climbing Mount Fan Si Pan; Hmong guides are said to know the mountain best. Sa Pa hotels and tour agents can arrange guides and porters as required.

Around seven million minority people (nearly two-thirds of Vietnam’s total minority population) live in the northern uplands, mostly in isolated villages. The largest ethnic groups are Thai and Muong in the northwest, Tay and Nung in the northeast and Hmong and Dao dispersed throughout the region. Historically, all these peoples migrated from southern China at various times throughout history: those who arrived first, notably the Tay and Thai, settled in the fertile valleys where they now lead a relatively prosperous existence, while late arrivals, such as the Hmong and Dao, took to living on the higher slopes. Despite government efforts to integrate them into the Vietnamese community, most continue to follow a way of life that’s changed very little over the centuries. For an insight into the minorities’ traditional cultures and highly varied styles of dress, visit Hanoi’s informative Museum of Ethnology before setting off into the mountains.

A popular, hassle-free way to visit minority villages is to join one of the organized trips offered by tour agencies in Hanoi, Sa Pa, Bac Ha and Ha Giang. Generally, you’re better off going with local companies, as they are more familiar with the villages visited. While it’s possible to go alone to places like Cat Cat near Sa Pa, independent trekking is generally frowned upon and locals may not be as welcoming as they are to groups.

Behaviour that we take for granted may cause offence to some ethnic minority people – remember that you are a guest. Apart from being sensitive to the situation and keeping an open mind, the following rules should be observed when visiting the ethnic minority areas.

Previously, the journey by bus from Gia Lam bus station in Hanoi to the centre of Sa Pa took just as long as the train and bus combination (about 10hr), but the completion of a new highway between Hanoi and Lao Cai has cut that time by about 4 hours – making the bus journey a more appealing alternative.

Sa Pa’s bus station is by the lake in the northeast of town, though many buses, such as the shuttle buses to and from the railway station in Lao Cai, drop passengers off in front of the church; buses to Hanoi leave from the main square in front of the church in the morning and evening. Note that if you’re heading to Bac Ha, you’ll need to change buses in Lao Cai and consequently endure a rather slow journey, though there are tour buses that go directly from Sa Pa on Sundays only for the market – ask at your hotel about these. There’s also a daily sleeper bus directly to Bai Chay for Ha Long Bay.

By train There’s no railway station in Sa Pa, yet most people still come here by train from Hanoi via the border town of Lao Cai, located on the east bank of the Red River, 38km from Sa Pa. They then take a shuttle bus from the station up the winding, switchback road to Sa Pa, which takes about an hour and drops passengers off on Cau May, Sa Pa’s main street.

Best way to get around Sa Pa

Motorbikes, with or without a driver, can be arranged through hotels in Sa Pa; self-drive is available but you will need to be an experienced biker to tackle the stony mountain tracks; make sure you test the bike for faults before leaving town.

It’s also possible to hire your own jeep and driver (around $100/day) via Sa Pa’s tour operators, depending on availability, but if you want to tackle the whole northwestern circuit you’ll find cheaper long-term prices in Hanoi.

Despite the glut of guesthouses and hotels in Sa Pa, rooms can still be in short supply in the summer months, pushing up prices by as much as fifty percent. Most hotels bump up prices over weekends too, when the town is crawling with Vietnamese tourists, so it’s worth considering a midweek visit. Most places offer some kind of heating, such as electric blankets, but it’s best to check rather than risk shivering all night. Foreigners can also now stay in many of Sa Pa’s surrounding minority villages, though you’ll need to arrange this through guesthouses and travel agencies, as independent trekking and village visits are frowned upon.

Sa Pa has the widest range of food in the north outside Hanoi; one benefit of the building boom is that there is plenty of choice, with many places serving a mixture of local cuisine and foreign dishes. To go where the locals are, try the street stalls along Pham Xuan Huan, parallel to Cau May, which serve pho and rice; some stay open late into the night, when the focus shifts to barbecued meat and rice wine.

Drinking and nightlife in Sa Pa

It’s worth taking a walk to Centre Square at around 6pm, as there are frequently performances of ethnic music and dance taking place there.

There are several ATMs dotted around Sa Pa, and the Agribank on Cau May can exchange cash.

You can find a post office at Ham Rong, though service is poor and mail delivery times are exceptionally long.

first time users and we absolutely loved it. Communication was always punctual and well informed. We travelled through Vietnam for a month and it was fanta ... 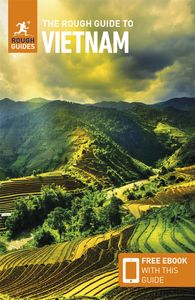