A grand Andean town, CAJAMARCA is second only to Cusco in the grace of its architecture and the soft drama of its mountain scenery. The city’s stone-based architecture reflects the cold nights up here – charming as it all is, with elaborate stone filigree mansions, churches and old Baroque facades. Almost Mediterranean in appearance, Cajamarca, at 2720m above sea level, squats below high mountains in a neat valley. The climate is surprisingly pleasant, with daytime temperatures ranging from 6 to 23°C (43–75°F); the rainy season hits between the months of December and March.

Proud and historic Cajamarca has intrinsic interest as the place where Pizarro captured and ransomed the Inca Emperor, Atahualpa, for gold, before killing him anyway. Gold has been an issue here since Pizarro arrived. Today the operations of massive gold mines in the region are generating protest; there are grave concerns in the area that the gold industry is polluting the land and groundwater.

There are two main routes into this mountain valley from Trujillo, each exciting and spectacular. The speediest way is to head up the coast via Pacasmayo, then turn inland along a paved road which follows the wide Río Jequetepeque Valley in about eight hours. A slower route (usually two days) is by bus along the old road, currently in a poor state of repair, from Trujillo through Huamachuco and Cajabamba.

As far back as 1000 BC the fertile Cajamarca Basin was occupied by well-organized tribal cultures, the earliest sign of the Chavín culture’s influence on the northern mountains. The existing sites, scattered all about this region, are evidence of advanced civilizations capable of producing elaborate stone constructions without hard metal tools, and reveal permanent settlement from the Chavín era right through until the arrival of the conquering Inca army in the 1460s.

For seventy years after the Incas’ arrival in the 1460s, Cajamarca developed into an important provincial garrison town, evidently much favoured by Inca emperors as a stopover on their way along the Royal Highway between Cusco and Quito. With its hot springs, it proved a convenient spot for rest and recuperation after the frequent Inca battles with “barbarians” in the eastern forests. The city was endowed with sun temples and sumptuous palaces, so their ruler’s presence must have been felt even when the supreme Inca was over 1000km away to the south in the capital of his empire.

The best time to visit Cajamarca is during May or June for the Festival of Corpus Christi. Until the early twentieth century this was the country’s premier festival, before it was superseded by the traditional Inca sun festival, Inti Raymi, held at Sacsayhuaman in Cusco. Corpus Christi nevertheless actually coincided with the sun festival and is traditionally led by the elders of the Canachin family, who, in the Cajamarca area, were directly descended from local pre-Inca chieftains. The procession here still attracts locals from all around, but increasing commercialism is eating away at its traditional roots. Nevertheless it’s fun, and visited by relatively few non-Peruvian tourists, with plenty of parties, bullfights, caballos de paso meetings and an interesting trade fair. The city’s other main fiesta is Día de Cajamarca (Cajamarca Day), usually around February 11, which is celebrated with music, dancing, processions and fireworks.

Atahualpa, the last Inca lord, was in Cajamarca in late 1532, relaxing at the hot springs, when news came of Pizarro dragging his 62 horsemen and 106 foot soldiers high up into the mountains. Atahualpa’s spies and runners kept him well-informed of the Spaniards’ movements, and he could quite easily have destroyed the small band of weary aliens in one of the rocky passes to the west of Cajamarca. Instead he waited patiently until Friday, November 15, when a dishevelled group entered the silent streets of the deserted Inca city.

For the first time, Pizarro saw Atahualpa’s camp, with its sea of cotton tents, and an army of men and long spears. Estimates varied, but there were between 30,000 and 80,000 Inca warriors, outnumbering the Spaniards by at least two hundred to one.

Pizarro was planning his coup along the same lines that had been so successful for Cortés in Mexico: he would capture Atahualpa and use him to control the realm. The plaza in Cajamarca was perfect, as it was surrounded by long, low buildings on three sides, so Pizarro stationed his men there. Leaving most of his troops outside on the plain, Atahualpa entered the plaza with some five thousand men, unarmed except for small battle-axes, slings and pebble pouches. He was carried into the city by eighty noblemen in an ornate carriage – its wooden poles covered in silver, the floor and walls with gold and brilliantly coloured parrot feathers. The emperor himself was poised on a small stool, richly dressed with a crown placed upon his head and a thick string of magnificent emeralds around his aristocratic neck. Understandably bewildered to see no bearded men and not one horse in sight he shouted, “Where are they?”

A moment later, the Dominican friar, Vicente de Valverde, came out into the plaza; with a great lack of reverence to a man he considered a heathen in league with the devil, he invited Atahualpa to dine at Pizarro’s table. The Lord Inca declined the offer, saying that he wouldn’t move until the Spanish returned all the objects they had already stolen from his people. The friar handed Atahualpa his Bible and began preaching unintelligibly to the Inca. After examining this strange object Atahualpa threw it angrily to the floor. As Vicente de Valverde moved away, screaming – “Come out, Christians! Come at these enemy dogs who reject the things of God.” – two cannons signalled the start of what quickly became a massacre. The Spanish horsemen hacked their way through flesh to overturn the litter and capture the emperor. Knocking down a two-metre-thick wall, many of the Inca troops fled onto the surrounding plain with the cavalry at their heels. Spanish foot soldiers set about killing those left in the square with speed and ferocity. Not one Inca raised a weapon against the Spaniards. Atahualpa, apparently an experienced warrior-leader, had badly underestimated his opponents’ crazy ambitions and technological superiority – steel swords, muskets, cannons and horsepower.

It’s a long, rough, but rewarding journey south from Cajamarca to the small town of Huamachuco, jumping-off point for visiting the archeological site of Marca Huamachuco as well as the fabulous, rarely visited and very remote ruins of Gran Pajaten. The whole journey from Cajamarca to the ruins takes at least five days, and involves a combination of bus and hiking. Cajabamba is the only other town of significance en route from Cajamarca to Huamachuco but its main interest is a place to change buses.

We did the suggested tour of Lunar Valley and Death Valley followed by watching an amazing sunset at a look out to the desert valley and mountains. This wa ... 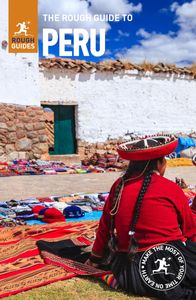