The best reason for heading 100km west from Tokyo towards the area known as Fuji Five Lakes is to climb Mount Fuji (富士山), Japan’s most sacred volcano and, at 3776m, its highest mountain. Fuji-san, as it’s respectfully known by the Japanese, has long been worshipped for its latent power (it last erupted in 1707) and near-perfect symmetry; it is most beautiful from October to May, when the summit is crowned with snow. The climbing season is basically July and August; even if you don’t fancy the rather daunting ascent, just getting up close to Japan’s most famous national symbol is a memorable experience. Apart from Fuji-san, the single most interesting sight is the wonderfully atmospheric shrine Fuji Sengen-jinja, in the area’s transport hub of Fuji-Yoshida.

During the summer, the five lakes in the area are packed with urbanites fleeing the city. Kawaguchi-ko is not only a popular starting point for climbing Mount Fuji, but also features a kimono museum and the easily climbable Mount Tenjō, which has outstanding views of Fuji-san and the surrounding lakes. The smallest of the other four lakes, horseshoe-shaped Shōji-ko (精進湖) is by far the prettiest. The largest lake, Yamanaka-ko (山中湖), southeast of Fuji-Yoshida, is just as developed as Kawaguchi-ko and has fewer attractions, while Motosu-ko (本栖湖) and Sai-ko (西湖) – the best for swimming and camping – are fine, but not so extraordinary that they’re worth the trouble of visiting if you’re on a short trip.

“A wise man climbs Fuji once. A fool climbs it twice”, says the Japanese proverb. Don’t let the sight of children and grannies trudging up lull you into a false sense of security: this is a tough climb. There are several routes up the volcano, with the ascent divided into sections known as stations. Most people take a bus to the Kawaguchi-ko fifth station (go-gōme), about halfway up the volcano, where a Swiss-chalet-style gift shop marks the end of the road. The traditional hike, though, begins at Fuji-Yoshida; walking from here to the fifth station takes around five hours, and it’s another six hours before you reach the summit. Many choose to climb at night to reach the summit by dawn; during climbing season, the lights of climbers’ torches resemble a line of fireflies trailing up the volcanic scree.

Essential items to carry include at least one litre of water and some food, a torch and batteries, a raincoat and extra clothes; however hot it might be at the start of the climb, the closer you get to the summit the colder it becomes, with temperatures dropping to well below freezing, and sudden rain and lightning strikes are not uncommon. You can rest en route at any of seventeen huts, most of which provide dorm accommodation (no need for a sleeping bag), with an option to add meals; it’s essential to book in advance during peak season (August). The huts also sell snacks and stamina-building dishes, such as curry rice. For a full list of the huts and contact numbers, go to the Fuji-Yoshida city website, which also has lots of information on climbing the mountain. Once you’ve summited, it will take around an hour to make a circuit of the crater. If you’re too tired, just take part in the time-honoured tradition of making a phone call or mailing a letter from the post office.

Mount Fuji’s official climbing season runs from July 1 to the end of August; during this period all the facilities on the mountain, including huts and phones at the summit, are open. You can climb outside these dates, but don’t expect all, or indeed any, of the facilities to be in operation, and be prepared for snow and extreme cold towards the summit.

Fuji-Yoshida (富士吉田), some 100km west of Tokyo, lies so close to Mount Fuji that when the dormant volcano eventually blows her top the local residents will be toast. For the time being, however, this small, friendly town acts as an efficient transport hub for the area, as well as the traditional departure point for journeys up the volcano, with frequent buses leaving for Fuji-san’s fifth station from outside the train station.

The volcano aside, the town’s main attraction is its Shinto shrine. To reach it, head southwest from the station uphill along the main street, Honchō-dōri, which will take you past several ornate pilgrims’ inns (oshi-no-ie). These old lodging houses, where pilgrims used to stay before climbing Mount Fuji, are set back from the road, their entrances marked by narrow stone pillars; some still operate as minshuku today.

Where the road hits a junction, turn left and after a couple of hundred metres you’ll see a giant torii and a broad gravel pathway lined with stone lanterns leading to Fuji Sengen-jinja (富士浅間神社), a large, colourful shrine set in a small patch of forest. Sengen shrines, dedicated to the worship of volcanoes, encircle Fuji, and this is the most important, dating right back to 788. The beautiful main shrine (honden) was built in 1615. Look around the back for the jolly, brightly painted wooden carvings of the deities Ebisu the fisherman and Daikoku, the god of wealth, good humour and happiness, who appears content to let a rat nibble at the bales of rice he squats upon.

At first glance, there doesn’t seem to be a whole lot to commend the shabby lakeside resort of Kawaguchi-ko (河口湖), a couple of kilometres west of Fuji-Yoshida. With its cruise boats and crass souvenir shops, this is the tourist hub of the area and is often choked with traffic during the holiday season. However, the fabulous view of Mount Fuji and lake Kawaguchi-ko from the top of Tenjō-zan (天上山) makes a trip here worth the effort. You can either take a three-minute cable-car ride up to the lookout or get some exercise by hiking up, which takes around 45 minutes. Kawaguchi-ko’s other highlight is the Itchiku Kubota Art Museum (久保田一竹美術館), on the northern shore of the lake. Housed in a Gaudí-esque-style building, the museum holds the work of Kubota Itchiku, who has refined the traditional tsujigahana textile-patterning technique and applied it to kimono. Inside the pyramid-shaped building are pieces from the artist’s Symphony of Light series, a continuous mountain landscape through the seasons, formed when the kimono are placed side by side. The museum is some 4km west of the town and can be reached by bus from both Fuji-Yoshida and Kawaguchi-ko. 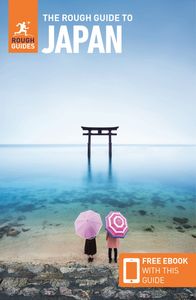