The third-largest of Croatia’s islands, Brač is the easiest to get to, with regular ferries running (hourly in high season) to the port of Supetar, an attractive former fishing village with shallow pebbly beaches. On the opposite side of the island is similarly picturesque Bol, boasting the spectacular beach of Zlatni rat and a mild-breeze climate that’s perfect for windsurfing. The smaller coastal settlements of Postira, Pučišća, Povlja and Milna are less visited, more relaxed, and ideal for a spot of Mediterranean-island chilling. Away from the coast, the island’s starkly beautiful interior has considerable allure, its scrub-covered karst uplands dotted with fertile depressions containing vines, olives and orange trees, or by the great man-made piles of limestone built up over centuries by smallholders clearing a place in which to grow crops.

Great places to visit in this region of Croatia

Brač was, until the development of the tourist trade, dependent on the export of its stone – a milky-white mix of marble and limestone – which was used in structures such as Berlin’s Reichstag, the high altar of Liverpool’s Catholic cathedral, the White House in Washington and, of course, Diocletian’s Palace in Split.

Despite being the largest town on the island, Supetar is a sleepy place onto which package tourism has been painlessly grafted. With a decent beach, a clutch of good restaurants and a bit of noise (but not too much), it’s a relaxing, family-oriented resort and a good base from which to explore the rest of the island.

Much of Supetar has the appearance of an affluent suburb, with rows of neat villas nestling amid lush, well-kept gardens. Something of an Old Town survives, however, its rust-brown stone houses grouped around a horseshoe-shaped harbour.

If you want the beauty of Brač but without package hotels then the northeastern coast is the best place to find it. There is a string of easy-going harbour settlements along this stretch of shore, each occupying dramatically indented bays that offer a range of bathing opportunities – beaches are predominantly rocky, although there is the odd shingly cove to paddle around in.

Smaller than Supetar and slightly more soothing, the fishing village of Postira is pleasantly curled around a bay, with spectacular views of mainland Dalmatia across the water. Rocky stretches of shore on either side of the bay are the perfect places to spread-eagle yourself.

Four kilometres east of town, Lovrečina Bay is one of those beaches that actually delivers what you read about in the brochures, with a sandy shore bordering translucent turquoise waters, and a ruined medieval church among olive groves just behind the strand. The fact that there is limited parking and no clear bus stop helps to keep it from becoming swamped.

Tucked into the western arm of a long Y-shaped inlet, the stone-quarrying town of Pučišća huddles around a grizzled pair of medieval defensive towers and a knobbly church belfry. The harbour is clean enough to swim in and there are pleasant rocky beaches at the northwestern end of Pučišća’s bay – simply follow the road along the western side of the inlet for twenty minutes. Pučišća’s stone industry is in big trouble (the local quarry went into receivership in 2012, provoking a wave of protests), but there is a stone-carving school in the village and characteristic white-stone souvenirs are on sale pretty much everywhere you look.

Of all northern Brač’s bay-hugging settlements, Povlja is arguably the prettiest. It’s a small place draped around a compact harbour, reached by a steeply descending road that comes with a marvellous view of the tiny port, the sea and the mountains of the mainland in the distance. Walk along the east side of Povlja’s harbour to reach a rocky headland, where there is a beach made up of big rough pebbles and otherworldly shards of rock – you’ll need sandals, and there’s no natural shade, but it’s a superbly scenic place for a swim.

You cannot help but be overwhelmed by the beauty of Bol’s setting, hugging the coastal flanks of Vidova gora mountain, or the charm of its old stone houses. Most famous the of the town’s attractions is the beautiful Zlatni rat (Golden Cape), a 400-metre-long pebbly promontory which stretches into the sea just west of town. Both Bol and its beach fill up with visitors during high season, when accommodation is at a premium; come in early summer or September for a lower stress dose of Adriatic charm.

Although there’s a modest string of package hotels on the path to Zlatni rat, the town itself is a reassuringly low-rise affair, with a couple of rows of houses set above an attractive harbour packed with small boats and pleasure craft.

I would really recommend them. They are very good with their service. Excellent quality and very informative! 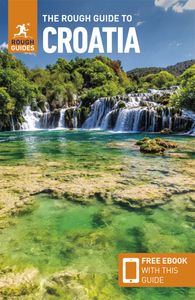