Sitting by the mouth of the Río Elqui, 11km north of Coquimbo and 88km north of Ovalle, La Serena is for many visitors their first taste of northern Chile, after whizzing straight up from Santiago by road or air. Situated 2km inland from the northern sweep of the Bahía de Coquimbo, the city centre is an attractive mix of pale colonial-style houses, carefully restored churches and bustling crowds. Aside from the noteworthy Museo Arqueológico, the city’s main appeal lies in just strolling the streets and squares, admiring the grand old houses, browsing through the numerous craft markets, wandering in and out of its many stone churches and hanging out in the leafy, central Plaza de Armas.

Great places to visit in this region of Chile

In the warmer months, hordes of Chilean tourists head for the six-kilometre beach, just 3km away along the Avenida del Mar – a rather charmless esplanade lined with oceanfront aparthotels and cabañas that are gloomily empty out of season. La Serena is also surrounded by some rewarding places to visit. Close at hand, and with good bus and colectivo connections, are the fine beaches at Tongoy and, above all, the glorious Elqui Valley, one of the must-sees of the region.

La Serena is Chile’s second-oldest city, with a history chequered by violence and drama. Founded by Pedro de Valdivia in 1544 as a staging post on the way to Peru, it got off to an unpromising start when it was completely destroyed in an Indian attack four years later. Undeterred, Valdivia refounded the city in a new location the following year, but La Serena continued to lead a precarious existence, subjected to frequent and often violent raids by pirates, many of them British.

Happier times arrived in the nineteenth century, when the discovery of large silver deposits at Arqueros, just north of La Serena, marked the beginning of the region’s great silver boom. These heady days saw the erection of some of the city’s finest mansions and churches, as the mining magnates competed in their efforts to dazzle with their wealth.

In the 1940s, Gabriel González Videla, president of Chile and a local Serenense, instituted his “Plan Serena”, through which the city developed its signature architectural style. One of the key elements of Videla’s urban remodelling scheme was the vigorous promotion of the Spanish colonial style, with facades restored or rebuilt on existing structures and strict stylistic controls imposed on new ones. Unimaginative and inflexible though some claimed these measures to be, the results are undeniably pleasing, and La Serena boasts an architectural harmony and beauty noticeably lacking in most Chilean cities.

Including Iglesia Catedral and Iglesia Santo Domingo on the Plaza de Armas, a remarkable 29 churches dot La Serena, lending an almost fairy-tale look to the city. This proliferation of places of worship dates from the earliest days of the city, when all the religious orders established bases to provide shelter for their clergy’s frequent journeys between Santiago and Lima (the viceregal capital). Nearly all the churches are built of stone, which is unusual for Chile, and all are in mint condition.

Standing at the corner of Balmaceda and de la Barra, the Iglesia San Francisco is one of La Serena’s oldest churches, though the date of its construction is unknown, as the city archives were burnt in the pirate Sharp’s raid of 1680. Its huge walls are one metre thick, covered in a stone facade carved in fanciful Baroque designs. Inside, the Museo de Arte Religioso contains a small but impressive collection of religious sculpture and paintings from the colonial period.

Beautiful for its very plainness, the 1755 Iglesia San Agustín, on the corner of Cienfuegos and Cantournet, was originally the Jesuit church but was taken over by the Augustinians after the Jesuits were expelled from Chile in 1767. Its honey-toned stone walls were badly damaged in the 1975 earthquake, but have been skilfully restored. On the northern edge of town, overlooking the banks of the Río Elqui, the recently restored seventeenth-century Iglesia Santa Inés was constructed on the site of a rudimentary chapel erected by the first colonists and its thick white adobe walls recall the Andean churches of the northern altiplano.

Thanks to the exceptional transparency of its skies, northern Chile is home to the largest concentration of astronomical observatories in the world. The region around La Serena, in particular, has been chosen by a number of international astronomical research institutions as the site of their telescopes, housed in white, futuristic domes that loom over the valleys from their hilltop locations. Among the research organizations that own the observatories are North American and European groups that need a base in the southern hemisphere (about a third of the sky seen here is never visible in the northern hemisphere).

Some of the observatories offer guided tours, including the impressive Cerro Tololo Inter-American Observatory, whose 4m telescope was the strongest in the southern hemisphere until it was overtaken by Cerro Paranal’s Very Large Telescope, the most powerful in the world, located near Antofagasta. All the tours listed below take place during the day and are free of charge but are strictly no-touching; a more hands-on night-time experience is provided by the small but user-friendly observatory on Cerro Mamalluca, 9km north of Vicuña, as well as by the newer Del Pangue observatory 17km south of Vicuña and the Collowara observatory outside Andacollo.

The Carnegie Institute’s observatory contains four telescopes, with two 6.5-metre telescopes under construction as part of its Magellan Project. Contact the observatory’s offices in La Serena to make reservations; they’re located next to Cerro Tololo’s offices on Colina El Pino.

Tours need to be booked several days in advance; you’ll need to collect your visitor’s permit from the observatory’s offices in La Serena (up the hill behind the university, at Colina El Pino) the day before the tour.

The site of the European Southern Observatory’s fourteen telescopes, including two 3.6m optical reflectors. Book tours in advance through the observatory’s Santiago offices or the La Serena office near the airport at Panorámica 4461.

The Rough Guide to Chile and related travel guides

We had a great time on our trip to Chile. Everything was well organized.

The Rough Guide to Chile 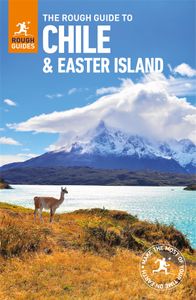 Your travel guide to Chile

Ready to travel and discover Chile?
Get support from our local experts for
stress-free planning & worry-free travels