Espírito Santo, a compact combination of mountains and beaches, is one of the smallest states in Brazil (with a population of only 2.6 million), but as Minas Gerais’ main outlet to the sea it is strategically very important. More iron ore is exported through its capital, Vitória, than any other port in the world. Not surprisingly the preponderance of docks, rail yards and smelters limits the city’s tourist potential, despite a fine natural location. To a mineiro, Espírito Santo means only one thing: beaches. During weekends and holiday seasons, people flock to take the waters, tending to concentrate on the stretch immediately south of Vitória, especially the large resort town of Guarapari. The best beaches, however, lie on the strip of coastline 50km south of Guarapari, and in the north of the state, heading towards Bahia.

Espírito Santo’s coastline is basically one long beach, some 400km in length. With the state sandwiched between Rio and Bahia, by rights the beaches should be stunning, but the reality is rather different. There’s a wide coastal plain along most of the state, and with few exceptions the beaches’ backdrops are hardly dramatic. Even so, if you’re travelling between Rio and Bahia there are places where you could easily spend a few days enjoying little-visited stretches of sand, including Anchieta to the south of Vitória and Itaúnas to its north.

The most beautiful beaches near Vitória are around the town of GUARAPARI, 54km to the south of the state capital, to which it’s linked by buses running every half-hour. There are dozens of hotels here, mostly white skyscrapers catering for visitors from Minas Gerais (prices are generally in the R$41–180 bracket). If you fancy raucous nightlife and holiday-making Brazilian-style, then Guarapari is the place. On the other hand, if you need to escape to somewhere tranquil, a mere 7km to the south of Guarapari along the ES-060 is the Praia dos Padres, a protected area lapped by a wonderfully green sea. Just south of here, the fishing village of Meaípe has some excellent restaurants; the Cantinho do Curuca is especially recommended for its bolinhos de aipim and moqueca capixaba. Meaípe is also a good place to stay overnight. The Pousada Enseada Verde (t 27/3272-1376, w www.enseadaverde.com.br; R$71-120), set on a hillside with views along the coast, is particularly comfortable and has a pool. For something a little more basic, try the Pousada do Sol (t 27/3272-0079; R$71-120). The beaches around here are amongst the finest in southern Espírito Santo, with a pleasant backdrop of hills covered in tropical vegetation, and they’re extremely popular in the summer.

Twenty kilometres south of Guarapari, the town of ANCHIETA is one of the oldest settlements in the state. Of particular interest here is the imposing Santuário Nacional Padre Anchieta (Mon–Fri 9am–noon & 2–5pm, Sat & Sun 9am–5pm; R$2), which dominates the town from a hilltop position. Built sometime around the late sixteenth century as a Jesuit mission, the complex includes a well-kept museum commemorating the evangelical work amongst Indians of the sixteenth-century Jesuit priest José de Anchieta. An important fishing port, Anchieta is one of the few places along this stretch of coast where life isn’t focused on tourism, and, as such, the hotels here are mainly grim. One exception is the Anchieta (t 27/3536-1258; R$41-70), a sprawling building dating from 1911 that still offers hints of its days as a “grand hotel”. Heading south along the coast you pass a string of small beaches – some of which, like Praia dos Coqueiros, are quite pretty and not overly developed – before reaching IRIRI, a busy holiday resort about 10km from Anchieta with a mix of low-budget pousadas and holiday homes.

Considering what there is to look forward to in Bahia and elsewhere in the Northeast, most visitors heading northward from Vitória choose not to linger on Espírito Santo’s northern coast. Indeed, the BR-101 remains far from the shore, never offering a glimpse of the ocean, and apart from the Serra do Mar far off to the west, this entire area is low-lying with a mix of cattle pasture and immense eucalyptus plantations as well as, nearer to the shore, mangrove swamps, patches of Mata Atlântica and beaches fringed with shrubs or wind-stunted coconut palms. The area does hold a few attractions, however. Coastal villages such as tiny Regência and Itaúnas remain fundamentally fishing communities, preserving traditions that have been gradually lost elsewhere, while a visit to the Reserva Natural da Vale do Rio Doce is a must for amateur naturalists.

Some 30km north of the industrial town of Linhares is the Reserva Natural da Vale do Rio Doce (Tues–Sun 7am–4pm; t 27/3371-9702, w www.vale.com; R$8), home to forty percent of Espírito Santo’s remaining portion of Mata Atlântica. All but a tiny fraction of the 22,000-hectare reserve is open to the public, but you’ll need a couple of days to appreciate the area, which encompasses five different ecosystems ranging from tablelands forest to mangrove swamp. Although there’s a wealth of flora and fauna, it’s the four-hundred-odd species of bird that are the biggest draw; the best time for birdwatching is between September and November, when the forests are most abundant with fruit. Parrots and parakeets are easily spotted, while you may see a rare cherry-throated tanager if you’re very lucky.

In the hills and mountains inland from Vitória are several small towns surrounded by superb walking country, great for a day-trip or as a base for a relaxing few days. You can easily spot where the first immigrants came from: the houses and churches of Santa Teresa look as Italian as those of Domingos Martins, Santa Leopoldina or Santa Maria look German. The smallest of these towns, Venda Nova, is home to the remarkable sight of Pedra Azul, a grey granite outcrop almost 1000m high that’s one of the unsung natural wonders of Brazil. If you’re heading for Minas Gerais, Venda Nova lies on the main Vitória–Belo Horizonte highway, Domingos Martins just off it. The area is a popular destination for residents of Vitória, so if you plan to stay over a weekend – in particular in the winter dry season, when the trails can be approached most comfortably, the sky is blue and there’s a chill in the air – pre-booking accommodation is advisable.

The closest of the inland towns to Vitória is DOMINGOS MARTINS, 42km away on the north side of the Belo Horizonte highway. Almost completely surrounded by steep hills, Domingos Martins is high enough to be bracingly fresh by day and distinctly cold at night; it looks like a run-down German mountain village, with its triangular wooden houses modelled after alpine chalets.

VENDA NOVA DO IMIGRANTE, to give it its full name, is an Italian village some 67km further west of Domingo Martins on the Vitória–Belo Horizonte highway (the BR-262). Even by the standards of the state, the landscape in which it is set is extraordinary, a delightful mix of rich Mata Atlântica, valleys and escarpments.

Ten kilometres outside the village is the most remarkable sight in Espírito Santo, a towering, bare granite mountain shaped like a thumb and almost 1000m high – the Pedra Azul, or “blue stone”. Its peak is actually 2000m above sea level, the other thousand accounted for by the hill country from which it sprouts, an area popular with mountaineers. It’s like an enormous version of the Sugar Loaf in Rio, except no vegetation grows on its bare surface, which rears up from thick forest and looks so smooth that from a distance it appears more like glass than stone. During the day sunlight does strange things to it – it really does look blue in shadow – but the time to see it is at either dawn or sunset, when it turns all kinds of colours in a spectacular natural show. The Pedra Azul forms the centrepiece of a state park, the Parque Estadual da Pedra Azul (Wed–Sun 9am–noon & 1.30–5.30pm; R$5 to the base or R$10 to the pools); there’s a small visitors’ centre at the foot of Pedra Azul with exhibits on local fauna and flora, and the park rangers will point you towards the trail leading up the stone – a tiring, but not very difficult, three-hour walk, though the area is closed when there’s been heavy rain. Bring food and drink for the trek, and swimwear if you want to enjoy a refreshing dip on the way up in one of the natural pools. An excellent, very detailed map of the Pedra Azul area is sold at most local hotels.

SANTA TERESA is only 90km northwest from Vitória but the hills between them are steep, reducing buses to a crawl for significant stretches and padding the journey out to a good two hours. The initial run up the main highway towards Bahia to the hill town of Fundão is attractive enough, but the winding road that takes you the 13km from here to Santa Teresa is something special, with great views on either side of the bus. The soils are rich, and dense forest is interspersed with coffee bushes and intensively cultivated hill farms, framed by dramatic granite cliffs and escarpments.

The drive to SANTA LEOPOLDINA (commonly known as just Leopoldina) from Santa Teresa is fabulous, along a country road winding through thickly forested hills and gorges. Despite the temporary look of the road and the tiny settlements you pass through – clearings in the forest uncannily like Amazon highway settlements – these are long-established communities dating from 1919, when the road was finished.

The road leading to SANTA MARIA DE JETIBÁ passes through hilly terrain, densely cultivated with coffee bushes, interspersed with pine plantations and, on the steepest of hillsides, patches of Mata Atlântica. As you enter Santa Maria – essentially one long street, the Avenida Frederico Grulke – you are greeted by a “Willkommen” sign. This is an outward expression of Santa Maria’s intense pride in its German heritage, an ancestry the village is keen to promote as a tourist attraction. Virtually the entire population is descended from mid-nineteenth-century immigrants from Pomerania and today remains bound together by a common heritage based on the continued use of the Pommersch Platt dialect and membership in the Lutheran Church.

Our tour guide was wonderful informative and understanding. 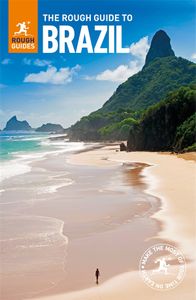