VIRGINIA is the oldest American colony: its recorded history began at Jamestown, just off the Chesapeake Bay, with the establishment in 1607 of the first successful British colony in North America. Though the first colonists hoped to find gold, it was tobacco that made their fortunes – as Native Americans were driven off their land and slaves were imported from Africa to work the plantations. Many of the wealthy Virginian planters had an enormous impact on the foundation of the United States: Thomas Jefferson, George Washington and James Madison among them. Later, as the confrontation between North and South over slavery and related issues grew more divisive, Virginia was caught in the middle, but joined the Confederacy when the Civil War broke out, providing the Confederate capital, Richmond, and its military leader, General Robert E. Lee. Four long years later, Virginia was ravaged, its towns and cities wrecked, its farmlands ruined and most of its youth dead.

Richmond itself was largely destroyed in the war; today it’s a small city with some good museums, the best ones historical in nature. The bulk of the colonial sites are concentrated just east, in what is known as the Historic Triangle, where Jamestown, the original colony, Williamsburg, the restored colonial capital, and Yorktown, site of the final battle of the Revolutionary War, lie within half an hour’s drive of each other on the Colonial Parkway. Another historic centre, Charlottesville – famously home to Thomas Jefferson’s Monticello – sits at the foot of the gorgeous Blue Ridge Mountains, an hour west of Richmond. It’s also within easy reach of the natural splendour of Shenandoah National Park and the little towns of the western valleys. Northern Virginia, a short hop from Washington DC, holds well-preserved estates, cottages, churches, barns and taverns tucked away along the quiet backroads, in addition to the antique architecture of Alexandria, Manassas, the scene of two important Civil War battles, and the very popular longtime home of George Washington, Mount Vernon.

The splendid re-creation of Colonial Williamsburg is an essential tourist experience for anyone with a flair for American history. While you have to buy a pricey ticket to look inside the restored buildings, the grounds are open all the time, and you can wander freely down the cobblestone streets and across the green commons.

From the Wren Building on the William and Mary campus, separated from Colonial Williamsburg by a mock-historic shopping centre, Duke of Gloucester Street runs east through the historic area to the old Capitol. The first of its eighteenth-century buildings is the Episcopalian Bruton Parish Church, where all the big names of the Revolutionary period were known to visit, and which has served as a house of worship for nearly three hundred years. Behind the church, the broad Palace Green spreads north to the Governor’s Palace. West of the church, the 1771 courthouse and the octagonal powder magazine, protected by a guardhouse, face each other in the midst of Market Square. Further along, Chowning’s Tavern, a reconstruction of an alehouse that stood here in 1766, is a functioning pub with lively entertainment.

The real architectural highlight is the Capitol, a monumental edifice at the east end of Duke of Gloucester Street. The current building, a 1945 reconstruction of the 1705 original, has an open-air ground-floor arcade linking two keyhole-shaped wings. One wing housed the elected, legislative body of the Colonial government, the House of Burgesses, while the other held the chambers of the General Court – where alleged felons, including thirteen of Blackbeard’s pirates, were tried.

The “merchants” of Duke of Gloucester Street have been done up as eighteenth-century apothecaries, cobblers and silversmiths, and the docents inside are an excellent source of historical information on their respective crafts; taking part in a casual conversation or working demonstration can be an excellent way to get into the spirit of things – learning about anything from making bullets and saddles to printing presses and wigs. The Raleigh Tavern along Gloucester Street was where the Independence-minded colonial government reconvened after being dissolved by the loyalist governors in 1769 and again in 1774; the original burned down in 1859.

The imposing two-storey Governor’s Palace, at the north end of Palace Green, has a grand ballroom and opulent furnishings, and must have served as a telling declaration of royal power, no doubt enforced by the startling display of swords, muskets and other deadly weaponry interlaced on the walls of the foyer.

One of America’s most familiar buildings – it graces the back of the nickel – Monticello, three miles southeast of Charlottesville on Hwy-53, was the home of Thomas Jefferson for most of his life. Its symmetrical brick facade, cantered upon a white Doric portico, is surrounded by acres of beautiful hilltop grounds, which once made up an enormous plantation, with fine views out over the Virginia countryside.

From the outside, Monticello looks like an elegant, Palladian-style country estate, but as soon as you enter the domed entrance hall, with its animal hides, native craftworks, and fossilized bones and elk antlers (from Lewis and Clark’s epic 1804 journey across North America, which Jefferson sponsored as president), you begin to see a different side of the man. His love of gadgets is evidenced by an elaborate dual-pen device he used to make automatic copies of all his letters, and by a weather vane over the front porch, connected to a dial so he could measure wind direction without stepping outside. In his private chambers, he slept in a cramped alcove that linked his dressing room and his study – he would get up on the right side of the bed if he wanted to make late-night notes, on the left if he wanted to get dressed.

With the price of a tour ticket you can also visit the gardens, in which extensive flower and vegetable gardens spread to the south and west, while other parts of the plantation site focus on the remains of Mulberry Row, Monticello’s slave quarters. Despite calling slavery an “abominable crime”, Jefferson owned almost two hundred slaves and recent research indicates he probably had one or more children with one of them, Sally Hemings. At the south end of Mulberry Row, a grove of ancient hardwood trees surrounds Jefferson’s gravesite, marked by a simple stone obelisk; the epitaph, which lists his major accomplishments, does not mention his having been president.

The dark forests, rocky ravines and lovely waterfalls of SHENANDOAH NATIONAL PARK, far from being untouched wilderness, were created when hundreds of small family farms and homesteads were condemned by the state and federal governments during the Depression, and the land was left to revert to its natural state. With this history, it’s no surprise that Shenandoah, meaning “river of high mountains”, has one of the most scenic byways in the US, Skyline Drive, a thin, 105-mile ribbon of pavement curving along the crest of the Blue Ridge Mountains. It starts just off I-66 near the town of Front Royal, 75 miles west of DC, and winds south through the park, giving great views over the area. However, the road was constructed using the latest in 1930s technology and it can be quite narrow at points for modern vehicles. Some of the vertiginous slopes alongside, combined with wildlife such as deer and smaller mammals that cross over the road, also make a trip on the Drive a bit hazardous in places – hence the 35 mph limit in force throughout the route.

Any time of year you can get the best of what the park has to offer by following one of the many hiking trails that split off from the ridge; most are two to six miles long. One begins near Byrd visitor centre and winds along to tumbling Dark Hollow Falls; another trail, leaving Skyline Drive at mile marker 45, climbs up a treacherous incline to the top of Old Rag Mountain for panoramic views out over the whole of Virginia and the Allegheny Mountains in the west. More ambitious hikers, or those who want to spend the night out in the backcountry, should head for the Appalachian Trail. 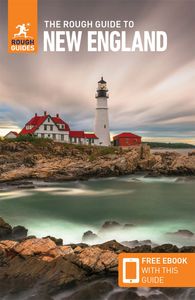