Geneva is an anomaly — the nearest thing the world has to an international city, yet far quieter than that description suggests. As anyone who's viewed it from Mont Salève can testify, Geneva is little more than town-sized, but in the most beautiful of locations. Plan your trip to Geneva with our guide to Geneva — based on The Rough Guide to Switzerland, your travel guide for Switzerland.

Great places to visit in this region of Switzerland

What to expect when visiting Geneva — your Geneva travel guide

Centred at the point the River Rhône flows from Lake Geneva, Geneva is only nominally within Switzerland’s borders. It's squeezed into a bulge of land that shares just 4km of internal border with its neighbouring Swiss canton, but 108km with France.

Small it may be, but Geneva is one of the most demographically diverse cities in Europe — 39 percent of the resident population is non-Swiss.

Contributing to the fluid nature of the population are the thirty thousand French frontaliers who commute to Geneva from just over the border, benefiting from a high Swiss salary and relatively low French living expenses.

Geneva is home to dozens of international organizations. Two of them — the United Nations’ European headquarters and the International Committee of the Red Cross — allow visitors a glimpse of the unseen lifeblood of the city. Namely, the diplomatic and administrative flair that has made Geneva world capital of bureaucracy.

Geneva is also one of the reasons you voted Switzerland one of the most beautiful countries in the world. What's more, Geneva gets glowing mentions in our run-down of things to do in Switzerland this summer.

For more detail on the wider region, read our Lake Geneva travel guide.

Top attractions and things to do in Geneva

Geneva’s Calvinist heritage is laid bare in the stark interior of this historic church. The Cathédrale St-Pierre is a mishmash of architectural elements, from twelfth century Gothic to a Neoclassical portico that’s more reminiscent of a museum than a church.

Be sure to spend time in the delightful Chapelle des Macchabées. Added in 1397, it's last on the left before you leave.

The origins of Geneva's iconic lakeside fountain lie in an attempt to solve a problem with the city’s water-pumping system.

By the time the reservoir was in operation and the fountain had become unnecessary, a few wily Genevois had caught onto its power as a tourist attraction. As such, it's a must-see during your Geneva vacation.

Today it spurts a single jet of water an incredible 140m into the air, with 500 litres of water forced out of the nozzle every second at about 200kph.

Artists' workshops and Italianate architecture lend a Mediterranean ambience to this lively suburb. In 1754 the King of Sardinia envisioned Carouge as a trading competitor to Geneva and turned it into a refuge for Catholics, Protestant, and Jews.

Today Carouge is still something of a refuge from the city. Its quiet, attractive streets are packed with artists’ workshops and old-style cafés, making it a highlight of any Geneva travel experience.

This cosmopolitan area is centred on the long Rue de Berne, and crammed with restaurants and cafés devoted to every conceivable cuisine, from Senegalese to Filipino.

Housed within the headquarters of the International Committee of the Red Cross (ICRC), the Musée International de la Croix-Rouge chronicles the history of modern conflict.

The museum-with-a-conscience also features interactive displays revealing the role the Red Cross has played in providing aid to combatants and civilians caught up in war and natural disasters.

Tours of the UN building are packed with star quality for those who want to hobnob with history. This is the world’s single largest conference centre for top-level international politicking — when the news reports on “negotiations in Geneva”, they mean here.

Taking a tour of the United Nations Building is one of the best things to do in Geneva, Switzerland © nexus7/Shutterstock

CERN, the European Organization for Nuclear Research, was established in 1954 as an international physics research centre. In 1989, CERN was the birthplace of the World Wide Web.

Today scientifically curious visitors head to the site to gain insights to a place where 2500 scientists seek answers to fundamental questions about the universe.

To see a host of the city's modern and old world attractions, book a guided tour of Geneva's international quarters and Old Town, or combine a city tour with a boat cruise.

Which areas should you visit in Geneva?

Genevois orient the city centre around the Rhône, which flows west into France from the Rade. The narrow lake harbour is flanked by grand facades.

The Rive Gauche, on the south bank, takes in a grid of waterfront streets which comprise the main shopping district (Les Rues-Basses) and the adjacent high ground of the Old Town. Just south is the university, spilling over into Plainpalais.

Beyond this is lively Carouge, characterized by artisans’ workshops.

Six bridges, including the main Pont du Mont-Blanc, link the Rive Gauche to the Rive Droite waterfront, where most of Geneva’s grand hotels sit.

Behind them lies the Gare de Cornavin, the main train station, alongside the cosmopolitan and occasionally rough Les Pâquis district.

The international area, 1.5km north and centred on Place des Nations, is home to the European headquarters of the UN, set amid a clutch of world bodies – not least the International Committee of the Red Cross.

Best places to stay in Geneva

At first sight, Geneva’s accommodation scene can appear to consist solely of grandiose palace hotels catering to diplomats and the international glitterati.

That said, more affordable accommodation is available if you know where to look, though booking ahead is essential, since all affordable rooms can easily get snapped up by delegates to the continuous round of conferences and international events.

Vacant rooms in Geneva’s two hostels are likewise at a premium, though thankfully both are comparatively large, sleeping hundreds of people between them.

Explore more of the best places to stay in Geneva.

Eating and drinking in Geneva - best restaurants, cafés and bars

With more than a thousand restaurants in the city, you could eat and drink your way around the world in Geneva.

While the many French restaurants mainly draw on influences from haute cuisine Lyon, authentic Swiss eating can be had in the Old Town, particularly around the Place du Bourg-de-Four.

If you're travelling with kids, or have a sweet tooth, you might want to take a chocolate-themed walking tour of Geneva.

Prefer cheese? Try a walking tour of the city that includes a fun fondue cookery class.

Nightlife and entertainment in Geneva

It has to be said that Geneva’s nightlife is unlikely to set your pulse racing, given that many venues cater to visiting businesspeople.

That said, clubbers looking for entertainment in Geneva usually head for Carouge.

In addition, lovers of live music will find a fair few places to be entertained. Free classical concerts are staged in many of Geneva’s churches year-round, and many bars host regular jazz and improv nights.

How to get around Geneva

Any Geneva travel guide worth its salt will recommend travellers get hold of a Swiss Travel Pass, or a Geneva Pass, which allows you to travel free on Geneva’s trams, buses and boats.

To save time as well as money, sort your Geneva pass or Swiss Travel pass before you travel.

Getting around Geneva by bus and tram

Geneva’s bus and tram network is extensive, integrated, very straightforward to use, and relatively inexpensive. Trams predominate in the centre, with routes threading off into the suburbs, where they connect with a myriad of bus routes.

Getting around Geneva on foot

Walking is feasible for the heart of Geneva. Even getting to further-flung attractions such as Carouge or the UN only takes 20 or 30min.

Getting around Geneva by ferry

Little ferries (mouettes) run by SMGN carry passengers across the mouth of the lake on four routes, labelled M1–M4. All citywide tickets and passes are valid.

Getting around Geneva by train

From the Cornavin station and from the Eaux-Vives station, the Léman Express L1–L6 commuter lines link the transborder agglomeration of Greater Geneva with the French Alps’ towns, including Evian, Thonon, Annemasse and Annecy.

Getting around Geneva by bike

Behind the station, you’ll find the usual bike-rental facilities. Alternatively, take advantage of the Genèveroule scheme, which offers mountain bikes and child seats. In summer, they're free, with just a small deposit.

You could also book an E-bike tour of Geneva's top sights.

Excursions and day trips from Geneva

Many cruises depart from the Mont-Blanc jetty, including Les Belles Rives Genevoises – an hour-long circular tour of both lakeshores (4–6 daily) – and dozens of eat-aboard brunch, lunch and evening cruises.

Alternatively, book yourself on a Swiss Riviera tour from Geneva to sample fine wine and local culture, with the option to travel aboard an old steamer boat.

The first ridge of the Alps rising southeast of Geneva is Mont Salève. Even though it lies across the border in France, this is the Genevois’ principal retreat into nature.

A cable car whisks you to the summit, where there are footpaths galore. In winter, these become cross-country skiing trails.

Situated on the southern lakeshore against the French border, the quiet village of Hermance is a delight of narrow lanes lined with sixteenth-century dwellings overlooked by a fourteenth-century tower.

Artists’ studios and galleries provide interesting diversions, but the main reason to visit is to sample the famed culinary delights of the restaurant in the Auberge d’Hermance and, for those who travel by boat, the gorgeous journey across the lake from Geneva.

Located 6km northeast of the Geneva, Cologny has long been known as an exclusive suburb. With country lanes weaving between woods, and large detached houses set back behind walls, the contrast with Geneva is striking.

It's easy to see why the tourist office has dubbed Cologny the “Beverly Hills of Geneva”.

Rafting Genève runs canoeing, rafting and kayaking trips daily on the Arve’s 8km of rapids, as well as whitewater trips on the Dranse and elsewhere.

You can also rent canoes and kayaks and make tandem paragliding jumps off Mont Salève.

If you're into exhilerating activities, read up on the best outdoor experiences in Switzerland.

Intrepid female travellers might also want to explore women only outdoor activities in Switzerland — all created by and for women.

Not a fan of planning? You could book a hassle-free tailor-made trip to Switzerland, with customisable itineraries curated by local experts covering everything from unforgettable highlights of Switzerland, to touring the Grand Circle.

We may earn commission when you click on links in this article, but this doesn’t influence our editorial standards. We only recommend services we genuinely believe will enhance your travel experiences.

The Rough Guide to Switzerland and related travel guides 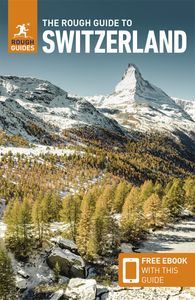 Your travel guide to Switzerland

Ready to travel and discover Switzerland?
Get support from our local experts for
stress-free planning & worry-free travels