Arugam Bay and around

Easygoing Arugam Bay is by far the most engaging of the east coast’s resorts. A-Bay, as it’s often known, has long been popular with the surfing fraternity, who come here to ride what are generally acknowledged to be the best waves in Sri Lanka. It’s also a good launching-pad from which to explore the gorgeous surrounding countryside and its varied attractions, from the elephant-rich Lahugala National Park and the little-visited Yala East National Park to the atmospheric forest hermitage at Kudimbigala.

There’s not much to ARUGAM BAY village itself: just a single main road running parallel to the beach dotted with guesthouses, cafés and shops, including some of Arugam Bay’s trademark quirky homespun architectural creations – rustic palm-thatch cabanas, teetering treehouses and other quaint structures (not to mention the distinctive wooden pavilion restaurant and red British telephone box of the landmark Siam View Hotel). The beach is now looking better than ever following recent clearances during which the authorities ordered the removal of all buildings within 20m of the waterline (albeit at considerable cost to local hoteliers and other residents, who were forced to watch as the government bulldozers rolled in and summarily razed significant slices of prized real estate).

A-Bay also marks the rough border between the Sinhalese-majority areas to the south and the mainly Tamil and Muslim areas further up the coast, and boasts an unusually eclectic but harmonious mix of all three ethnic groups – as well as a growing number of Western expats. Fears that the village’s uniquely (for Sri Lanka) alternative and slightly off-the-wall character will be erased by larger and more mainstream tourism developments remain, however, especially given the forthcoming opening of the new Hambantota airport, which will make the village significantly easier to reach for international visitors. For the time being, however, Arugam Bay preserves its own enjoyably eccentric charm.

A short way inland from Arugam Bay the main road west passes through the small but beautiful Lahugala National Park, comprising Lahugula Tank and a magnificent swathe of dry mixed evergreen forest, dotted with lofty rosewoods and satinwoods. The park is best known for its elephants: up to 150 congregate around the tank during July and August, when the rest of Lahugala’s waters dry up, to drink and feed on the beru grass which grows prolifically around the water. The tank is also good for spotting a wide range of aquatic birds, including innumerable snowy white egrets that can often be seen hitching a ride on the backs of obliging elephants. When the rains come the elephants disperse, and large sections of the park turn a brilliant, post-monsoonal green.

Lahugala isn’t officially open to the public, and no vehicles are allowed in, although you’re free to walk into the park from the main road between Arugam Bay and Monaragala, which runs right through it. Be aware, however, that walking through jungle with a large elephant population carries a degree of risk, so it’s best to stick to one of the recognized viewpoints close to the road. The easiest (and safest) option is to head to Lahugala Hospital (at the 306km post). Just west of here along the main road, several small paths run off to the right to the raised bund at the edge of Lahugala Tank, about 100m away, which offers a secure vantage point and good chances of spotting elephants.

Guesthouses in Arugam Bay can arrange jeeps to Lahugala, although given that you can’t actually drive these into the park, you might as well save your money and catch a bus or tuktuk.

The countryside and coastline south of Arugam Bay is beautifully unspoilt. Buses run three times daily along the good tarmac road which rolls through rice paddies and scrub jungle as far as the dusty little village of PANAMA, 12km south of Arugam Bay. There are miles of superb deserted beach along this stretch, and a pair of huge rock outcrops popularly known as Elephant Rock and Crocodile Rock for their alleged resemblance to these creatures, though you’ll need a tuktuk (or 4WD) to reach them. Elephants are sometimes seen wandering in the vicinity. Panama itself has a fine, dune-backed beach, 1km south of town; to reach it, pass through the village and follow the road round to the left.

The road south of Panama is currently unsurfaced, although the dirt track is kept in reasonable condition and is usually passable in a 2WD (tuktuks make the journey with ease). The countryside here is almost completely uninhabited, and very similar in appearance to that of Yala (West) National Park, with extensive lagoons, scrub jungle and huge populations of aquatic birds, as well as occasional elephants and crocodiles.

Around a 45min drive from Arugam Bay, a turning on the right leads for 500m to reach the beautiful forest hermitage of KUDIMBIGALA, whose hundreds of caves are thought to have been occupied by Buddhist monks as far back as the first century BC.

From the car park, follow the path ahead of you (keeping the modern rock-top dagoba to your right) into the surrounding woodland, following the track as it squeezes through the trees and between enormous rock outcrops to reach, after about ten minutes, the Sudasharna Cave, a small white shrine half-covered by an overhanging rock outcrop bearing the faint remains of ancient Brahmi script next to an unusual little carving symbolizing the Triple Gem.

Following the path to the left of the cave leads after another ten minutes up to the Madhya Mandalaya (“Plain of Ruins”), with a small dagoba and other monastic remains scattered over a rocky hilltop. Alternatively, heading right from the cave brings you to the huge Belumgala, a towering rock outcrop topped by yet another small dagoba. Rock-cut steps lead to the top, a breathless ten-to-fifteen-minute climb, at the end of which you’ll be rewarded by one of the finest views anywhere in the east: a vast swathe of jungle dotted with huge rock outcrops running down to the sea, and with scarcely a single sign of human habitation in sight.

Yala East National Park (also known as the Kumana National Park) has recently reopened after extended closure during the war years, when it served as an LTTE hideout. The main attraction within the park is the Kumana Wewa tank and surrounding mangroves, home to an outstanding array of aquatic birds.

With waves fresh from Antarctica crashing up onto the beach, Arugam Bay is sometimes claimed to be one of the top ten surf points in the world, and periodically plays host to international tournaments. The best time for surfing is between April and Oct/Nov.

There are several breaks close to Arugam Bay, plus others further afield. The biggest waves in A-Bay itself are at The Point (near Mambo’s guesthouse), a long right-hand break which has (on a good day) 2m waves and a 400m ride. Another good break can be found straight off the beach by the Siam View Hotel. Baby Point (between Mambo’s and Siam View Hotel) is ideal for beginners, with smaller waves and a sandy bottom (unlike The Point, which is coral-bottomed), while the beach break in front of the Stardust Beach Hotel is also good for beginners and body surfing.

South of Arugam Bay, the break near Crocodile Rock (3km south of Arugam Bay) is an excellent spot for beginner and intermediate surfers if there’s sufficient swell. Some 5km further on, Peanut Farm has two surf points: a perfect tube for expert surfers and a smaller ride ideal for beginners; there are also good waves further south at Okanda.

A number of spots north of Pottuvil are also becoming popular among more experienced surfers (and are generally quieter than those in A-Bay). About 9km north of Arugam Bay, Pottuvil Point breaks off a long and deserted sandy beach; the ride can be as long as 800m, though the waves are a bit smaller than in A-Bay. Other nearby breaks include Whiskey Point and Lighthouse Point (aka “The Green Room”).

Contrary to popular belief, the tsunami that devastated Sri Lanka in 2004 was not the first the island has experienced in modern times. As recently as August 1883, the massive eruption of Krakatoa, between Java and Sumatra in Indonesia, unleashed gigantic tidal waves that sped west across the Indian Ocean before reaching Sri Lanka. At Galle, a sequence of fourteen freak waves, each separated by a few minutes, was observed. The Ceylon Observer described the scene preceding the arrival of the waves, one eerily prescient of events 121 years later: “The sea receded as far as the landing stage on the jetty. The boats and canoes moored along the shore were left high and dry for about three minutes. A great number of prawns and fishes were taken up by the coolies and stragglers about the place before the water returned.” Further around the coast, a 3.5m-high wave hit Hambantota, while at Panama on the east coast “ships suddenly sunk downwards and were then drawn backwards to be left stuck in the drying mud, their anchors exposed – and just as suddenly were borne up by an inrushing surge of water. The local streams, with hitherto sweet water, all promptly turned salty for at least a mile and a half upriver” (as Simon Winchester describes it in his vivid account of the eruption, Krakatoa). What the 1883 tsunami mercifully lacked, however, was the destructive force of its 2004 counterpart. Only a single casualty was recorded in the entire island, at Panama, where a woman was swept away from the harbour bar – probably the unluckiest victim of a volcanic eruption more than 3000km distant.

Absolutely love Sri Lanka, fantastic variety of places visited. Staff at every hotel have been polite, welcoming and attentive. Having worked in travel for ... 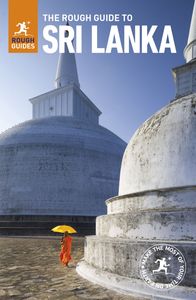