Great places to visit in this region of Slovenia

From Bled hourly buses make the 25km trip through the verdant, mist-laden Sava Bohinjka Valley to Lake Bohinj. In appearance and character Lake Bohinj is utterly different from Bled: the lake crooks a narrow finger under the wild mountains, evergreen woods slope gently down to the water, and in the relative absence of visitors, a lazy stillness hangs over all.

Ribčev laz (referred to as Jezero on bus timetables), at the eastern end of the lake, is where most facilities are based. Walking trails lead round both sides of the lake (the 12km circumference can be walked in 3 hours), or north onto the eastern shoulders of the Triglav range. One route leads north from the enchanting village of Stara Fužina into the Voje valley, passing through the dramatic Mostnica Gorge, a local beauty spot.

Ukanc, Mount Vogel and the Valley of the Seven Lakes

About 5km from Ribčev Laz at the western end of the lake is the hamlet of Ukanc (sometimes referred to as Zlatorog), where a cable car whizzes you vertiginously up to the summit of Mount Vogel (1540m) in no time – if the Alps look dramatic from the lakeside, from Vogel’s summit they’re breathtaking. Ukanc is also the starting point for a one-hour walk north to the photogenic Savica Waterfalls. From here, the serious hiking can commence, either as a day-trip to the Valley of the Seven Lakes – an area strewn with eerie boulders and hardy firs – or as an expedition to scale Mount Triglav itself.

On the other, less touristy side of the mountains from Bohinj, the brilliantly turquoise River Soča streaks through the western spur of the Julian Alps, running parallel with the Italian border. During World War I, the Soča marked the front line between the Italian and Austro-Hungarian armies; now memorial chapels and abandoned fortifications nestle incongruously amid awesome Alpine scenery. The valley is a major centre for activity-based tourism, with the river providing ideal rafting and kayaking conditions throughout the spring and summer, and the mountain slopes perfect for skiing and snowboarding in winter. The main tourist centres are Kobarid and Bovec, both small towns boasting a range of walking possibilities. The GZS 1:50,000 Zgornje Posočje map covers trails in the region.

25km up the valley from Kobarid, the village of Bovec straggles between imperious mountain ridges. Thanks to its status as a winter ski resort, it has a greater range of accommodation options and sporting agencies than Kobarid, and as a result, a more vibrant atmosphere. The quickest route into the mountains from here is provided by the gondola that departs on the hour 1km south of the village, which ascends to the pasture-cloaked Mount Kanin over to the west.

It was at the little Alpine town of Kobarid that German and Austrian troops finally broke through Italian lines in 1917, almost knocking Italy out of World War I in the process. The Kobarid Museum, Gregorčičeva 10, presents a thoughtful account of the 29 months of fighting in the region through a collection of photographs, maps and mementoes. It’s also the starting point for the superb Kobarid Historical Trail, a steep 5km loop where remote woodland paths are punctuated by forgotten wartime landmarks. From the town’s main square you climb up to a striking three-tiered Italian War Memorial, opened by Benito Mussolini in 1938, before hiking further into the hills to see surviving military fortifications. At the trail’s farthest point from town bubbles the Kozjak waterfall, less impressive for its height than for the cavern-like space that it has carved out of the surrounding rock. Maps of the trail are available from the museum and the tourist office on Trg Svobode 16.

The Rough Guide to Slovenia and related travel guides

The Rough Guide to Slovenia 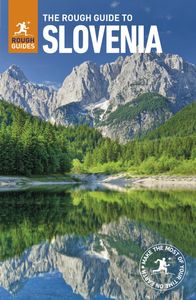