South of Belgrade, the softly rolling hillsides studded with low red-roofed houses are the setting for three of the country’s most precious medieval monasteries: Žiča, Studenica and Sopoćani. Elsewhere, the south’s main city, Niš, conveniently straddles major road and rail routes to Bulgaria and Macedonia, and is an attractive small town with some fascinating sights.

The pleasant university town of Niš (Ниш), 235km southeast of Belgrade, is a useful stopover point between Belgrade and Sofia or Skopje. Its inhabitants have a definite small-town pride, as well they might: this is the birthplace of Constantine, the Roman emperor responsible for the conversion of the whole empire to Christianity. Its collection of intriguing – if macabre – sights is a gritty reminder of the darker sides to Serbia’s history, but the focus in the cafés and bars crammed with students is all on having a good time. The city’s centrepiece is its main square, Trg Kralja Milana, which sits across the Nišava from Niš Fortress.

The fortress apart, Niš does suffer from a surfeit of rather grim sights. The first, to your right as you leave the fortress, is the miniature blue-domed memorial chapel perched on the lawn, which commemorates the local people killed in the NATO bombings. East of the centre on Brače Taskoviča, Ćele Kula is more gruesome still. It dates from 1809, when Stevan Sinđelić, commander of a nationalist uprising, found his men surrounded by the Turkish army on nearby Čegar Hill and took drastic action against his adversaries, firing into his gunpowder supplies and blowing up most of the Turks and all the Serbs around him. Following the battle, to deter future rebellion the ruling Pasha ordered that the heads of the Serbian soldiers killed in the battle be stuffed and mounted on the tower; 952 went into the making of this macabre totem pole, though today only 58 remain.

Most evocative of all the town's sight is the derelict Crveni Krst concentration camp, a ten-minute walk down busy Bulevar 12 Februar from the bus station, where the hand-painted German signs for the washroom, messroom and kitchen make it all seem very recent. The barbed-wire fences and watchtowers, so familiar from camps in Poland and Germany, are a reminder that the displacement and genocide of millions was a truly pan-European operation.

A Roman fortress once stood here – a circle of Roman tombstones remains inside – but the current fortifications date from the beginning of the eighteenth century. Enter from the main Istanbul Gate facing the bridge; inside, the town authorities have put real effort into making this a place residents can enjoy, with the beautiful mosque of Bali Beg converted into an exhibition space and the row of cafés in the shadow of the fortress’s inner wall a cool spot to unwind. Each August the whole fortress is given over to the Nišville jazz festival.

In the hilly stretch south from the town of Kraljevo – itself some 170km south of Belgrade – to Novi Pazar lie some of Serbia’s most impressive monasteries. Just 4km southeast of Kraljevo, Žiča was a thirteenth-century creation of St Sava – Serbia’s patron saint and the first archbishop of the independent Serbian Church – with a vivid red exterior that evokes the red Serbs use to paint eggs at Easter.

The first and greatest of the Serbian monasteries, however, is Studenica, set against the wild, roaming slopes some 12km (and accessible by bus) from the village of Ušče. It was established in 1190 by Stefan Nemanja, founder of the Nemanjić dynasty, whose marble tomb lies in the Church of the Virgin Mary. Studenica’s superb frescoes were the work of an innovative but still anonymous Greek painter who created trompe-l’oeil frescoes to resemble mosaics.

Around 16km from Novi Pazar is the Sopoćani monastery, a thirteenth-century construction that once stretched across a whole complex but of which only the Holy Trinity Church remains. The Assumption of Virgin Mary is the most famous of its unusually large Byzantine frescoes; the bright colours and expressive faces are said to prefigure the Italian Renaissance.

We had a fantabulous tour of Serbia! Our tour guide was very well experienced and was always with us for every need. I will definitely contact you for any ... 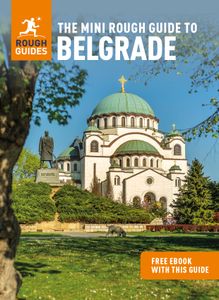