Although Namibia isn’t a conventional safari destination – Etosha aside – in terms of gazing at herds of wildebeest migrating across the plains, there are several good reasons why it is a top place to head out on safari, especially a self-drive adventure. Roads are generally in good condition, and most are suitable for first-time safari-goers; even in high season there are few crowds – unlike in some of Africa’s more renowned wildlife-viewing hotspots; and it’s very safe. What’s more, it’s a great deal of fun. The main drawback is the distances you’re likely to cover, and the fuel costs involved.

There are various decisions to be made before embarking on a safari adventure, regarding whether you drive yourself, or travel as part of a group. Should you book accommodation through a travel agent in your home country, or in Namibia? If money’s not a concern, but time is, are you going to fly in and out of some or all of your destinations? It’s also possible to arrange a combination tour, with some organized activities, and other self-drive elements, which you can sort out yourself or pay a tour operator to do everything for you.

Three issues you need to be clear on before planning can begin relate to your budget, the length of time available, and the destinations within Namibia you want to cover. This last issue is particularly relevant if you’re going to be driving, or be driven everywhere, which in turn has a bearing on the time it will take. Given that lodges and camps have to be vacated by 10am, and check-in is not before 3pm, it makes sense to plan for at least two nights, preferably three per destination – providing you with at least one full day – to allow you to make the most of your surroundings and the activities on offer, otherwise you may feel you’re constantly on the road.

Organized tours obviously take any spontaneity out of the equation, but can help reduce the time and stress of planning everything yourself. Larger companies tend to offer set itineraries, generally on specific dates, though they may also arrange bespoke tours, which many of the smaller operators specialize in, and which inevitably cost more. Price primarily relates to the type of accommodation (camping or luxury lodge?) and the associated degree of pampering, as well as the size of the group, though the number and quality of the guides is also an important factor. Group tours can be organized through specialist tour operators in your home country, or ones in Namibia, or even South Africa.

If you book through a company in your own country, the trip is likely to be more expensive since agencies are covering overheads and wages higher than those in Namibia (unless you’re coming from South Africa). On the other hand, they may also sort your flights, include better insurance deals in case of cancellation, and you may be able to pay using a credit card or Paypal. Many operators in Namibia do not accept credit cards and demand bank transfers in advance of your arrival in Namibia. This is fine if you’re transferring from South Africa (within the Common Monetary Area), and no big deal if you’re only paying one tour operator – and indeed is a good reason for working through an operator rather than planning your itinerary yourself; otherwise, you’ll find yourself having to pay for international bank transfers for every night’s accommodation or activity that you book, which can be costly. Some lodgings may accommodate you if you write and explain and will hold your credit card details (though they often ask you to email them!) as insurance until you reach the country and can pay cash (from an ATM or bank withdrawal) directly into a bank account or turn up on their doorstep with the required sum.

Bespoke tour operators can also organize self-drive safaris for you; they’ll make all the bookings for lodgings and sort your transport and any extras you may want (such as renting camping gear), and, if they are in Namibia, they can meet and greet you at the airport. Self-organized self-drive safaris, on the other hand, offer the greatest flexibility, especially if you decide to equip yourself with a tent, though you’ll still need to make some advance reservations should you intend to visit during high season, even if camping. Should really remote areas like Kaokoland be on your itinerary but you are unsure of your self-drive skills and/or you’re travelling alone, you might consider a guided self-drive safari, which some companies offer.

Once you’ve made your mind up to drive yourself for at least some of the trip, the next decision concerns whether to rent a 2WD or a 4WD. There are pros and cons for both and these relate to your likely itinerary and budget. Also, if you intend to do some camping, you’ll need to decide whether you want a roof tent or one that you can leave in a campground while you drive around.

For novice safari self-drivers, Namibia can provide the easiest initiation as long as you stick to the main roads and main sights; even so, there are a few basic rules to follow to ensure you stay safe.

Namibia’s most famous reserve and the best location for spotting big mammals, including four of the “Big Five” – which is what many visitors obsess over – is Etosha National Park. Here you stand a good chance of seeing large numbers of animals, especially in the dry season (July–Oct), although herds of elephant and buffalo are beginning to return to the newer reserves in the Zambezi Region. Namibia also hosts the world’s largest cheetah population and there are several cheetah conservation projects that you can visit if you want a near-guaranteed sighting. More intriguing, perhaps, and unique to Namibia, are the guided excursions into the Namib Desert from Swakopmund that focus on Namibia’s “Small Five” – some of the extraordinary tiny creatures that have adapted to this harsh environment.

While seeking out wildlife is likely to be one of your main motivations for visiting Namibia, there may well be times when you need to steer clear, or beat a hasty retreat.

Boasting over 650 species of birds, including numerous near-endemics, Namibia provides plenty of birdwatching opportunities. Peak times for avian activity are during the rainy season (Nov–April), when food is more plentiful and nesting occurs. Migrants from Europe and other parts of Africa generally arrive in October and leave around April. While most of the country is home to desert bird species, Walvis Bay hosts southern Africa’s most important coastal wetlands, enjoyed by around 250,000 birds during the migration season. Though Walvis Bay is synonymous with flamingos, which constitute the bulk of the population, and are visible all year, a host of other waders and seabirds also draw birders and casual visitors alike. The freshwater wetlands and rivers of the Zambezi Region also provide a wealth of tropical birdlife, from the iconic fish eagle to rainbow-coloured bee-eaters and the extraordinary-looking spoonbill and hammerhead. Several river lodges here offer birdwatching river trips. Two specialist birding tour operators are based in Swakopmund: Batis Birding Safaris and Safariwise both offer day tours as well as multi-day birding trips all around Namibia and further afield.

National parks and other reserves comprise almost a fifth of Namibia’s vast terrain, managed predominantly by the Ministry of the Environment and Tourism (MET).

While only Etosha National Park in the north can claim to host really large quantities of “big game”, Namibia’s parks and reserves are famous for their extraordinary wilderness landscapes, such as the spectacular sand dunes round Sossusvlei in what is currently the country’s largest protected area, the Namib-Naukluft National Park, and the inaccessible, eerie coastline of the Skeleton Coast National Park, in the northwest. One of the more recent national parks, created in 2009, is the Tsau ||Khaeb – better known as the Sperrgebiet; located in the southwest of the country, it was formerly an out-of-bounds diamond-mining area and can currently only be visited on a guided tour from Lüderitz. These three major parks are now linked by the Dorob National Park, a relatively open park, which includes areas round Swakopmund and Walvis Bay, and for which there is no fee. Collectively these four parks form the Namib-Skeleton Coast National Park, extending the entire 1500km length of Namibia’s coastline.

Other major reserves include the dramatic sandstone cliffs of the Waterberg Plateau Park, on the road north from Windhoek, and the |Ai-|Ais/Richtersveld Transfrontier Park, which extends into South Africa on Namibia’s southern border and includes the awe-inspiring Fish River Canyon. We have a full summary of the major features and attractions of each park and the types of accommodation available. Downloadable e-brochures on all the flora, fauna and geography of Namibia’s main national parks and government-owned reserves are available from the Namibia Tourism website.

In addition to the state-managed national parks and reserves, Namibia boasts a wealth of private reserves – often called guestfarms – and community-managed conservancies, aimed at combining nature conservation with poverty alleviation initiatives, including many associated with tourism.

Staying safe on the roads

Though all rental agencies should give you a full briefing about the vehicle and check that all equipment is present and in working order, some don’t, especially the international rental agencies when handing over a 2WD in high season and staff are stretched. Ensure that you get fully briefed; stories abound of tourists being given vehicles with no functioning jack, or without being advised not to travel in the dark. Make sure you’re not one of them.

Check the car has a jack and one, or preferably two (which you can pre-book at extra cost), spare wheels in good condition before you start out. Most 4WD rentals should also include a first-aid kit, a shovel to dig yourself out of sand or mud, and a tow rope in case the digging fails. A tyre pressure gauge and pump are also essential if you’re going to remote areas such as the Kaokoveld, or if you’ll be needing to deflate (and then reinflate) your tyres after driving through deep sand.

Also make sure you always travel with plenty of water and snacks, in case of a long wait for the cavalry to arrive should your vehicle break down. 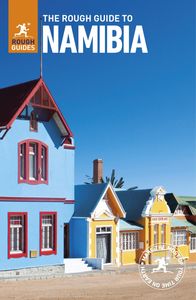