Yogyakarta (pronounced “Jogjakarta” and often just shortened toYogya, or “Jogja”) ranks as one of the best-preserved and most attractive cities in Java, and is a major centre for the classical Javanese arts of batik, ballet, drama, music, poetry and puppet shows. It is also the perfect base from which to explore the temples of Borobudur and Prambanan, or take an early morning hike up Gunung Merapi. Tourists flock here, attracted not only by the city’s courtly splendour but also by the cuisine and shopping, and the various language and cultural courses on offer. As a result there are more tourist-oriented hotels in Yogya than anywhere else in Java and, unfortunately, a correspondingly high number of touts, pickpockets and con-artists.

Great places to visit in this region of Indonesia

Sultan Hamengkubuwono I (also known as Mangkubumi) established his court here in 1755, spending the next 37 years building the new capital, with the Kraton as the centrepiece and the court at Solo as the blueprint. In 1946, the capital of the newly declared Republic of Indonesia was moved to Yogya from Jakarta, and the Kraton became the unofficial headquarters for the republican movement. The royal household of Yogya continues to enjoy almost slavish devotion from its subjects and the current sultan, Hamengkubuwono X, remains an influential politician.

The layout of Yogya reflects its character: frenetic, modern and brash on the outside, but with a tranquil, ancient and traditional heart in the Kraton, the walled city. Set in a two-kilometre-wide strip of land between the rivers Kali Winongo and Kali Code, this is the focus of interest for most visitors. Kraton means “royal residence” and originally referred just to the Sultan’s Palace, but today it denotes the whole of the walled city (plus Jalan Malioboro), a town of some ten thousand people. The Kraton has changed little in two hundred years; both the palace, and the 5km of crenellated icing-sugar walls that surround it, date from the first sultan’s reign.

Arts, culture and entertainment in Yogyakarta

Wayang kulit (shadow puppetry) is the epitome of Javanese culture, and it’s worth catching a show, although wayang golek, where wooden puppets are used, tends to be easier to follow, as the figures are more dynamic and expressive. With one honourable exception, all of the performances listed are aimed at tourists, and only two hours long.

The Ramayana dance drama is a modern extension of the court dances of the nineteenth century, which tended to use that other Indian epic, the Mahabharata, as the source of their story lines.

Most people enter the Kraton through the northern gates by the main post office, beyond which lies the busy town square, Alun-alun Utara. As is usual in Java, the city’s grand mosque, Mesjid Agung (visit outside of prayer times), built in 1773 by Mangkubumi, stands on the western side of the alun-alun. It’s designed along traditional Javanese lines, with a multi-tiered roof on top of an airy, open-sided prayer hall. A little to the north of the mosque, just by the main gates, stands the Sono Budoyo Museum, Jl Trikoro 6, which houses a fine exhibition of the arts of Java, Madura and Bali. The intricate, damascene-style wooden partitions from Northern Java are particularly eye-catching, as are the many classical gold and stone statues dating back to the eighth century.

On the southern side of the alun-alun lies a masterpiece of understated Javanese architecture, the elegant collection of ornate kiosks and graceful pendopos (open-sided pavilions) that comprise the Ngayogyokarto Hadiningrat – the Sultan’s Palace. It was designed as a scale model of the Hindu cosmos, and every plant, building and courtyard is symbolic; the sultans, though Muslim, held on to many Hindu and animist beliefs and thought that this design would ensure the prosperity of the royal house.

The palace is split into two parts. The first section, the Pagelaran, immediately south of the alun-alun, is bypassed by most tourists, as there is little to see.

Further south stands the entrance to the main palace. Little has changed here in 250 years: the hushed courtyards, the faint stirrings of the gamelan and the elderly palace retainers, dressed in the traditional style with a kris (dagger) tucked by the small of their back, all contribute to a remarkable sense of timelessness. You enter the complex through the palace’s outer courtyard or keben.

Two silver-painted raksasa (temple guardian statues) guard the entrance to the largest and most important palace courtyard, the Pelataran Kedaton. On the right, the ornate Gedung Kuning contains the offices and living quarters of the sultan, out of bounds to tourists. A covered corridor joins the Gedung Kuning with the Golden Throne Pavilion, or Bangsal Kencono, the centrepiece of the Pelataran Kedaton. Its intricately carved roof is held aloft by hefty teak pillars, with carvings of the lotus leaf of Buddhism supporting a red-and-gold diamond pattern of Hindu origin, while around the pillar’s circumference runs the opening line of the Koran. The eastern wall leads to the Kesatrian courtyard, home to another gamelan orchestra and a collection of royal portraits, while to the south is a display dedicated to Hamengkubuwono IX.

The Rough Guide to Indonesia and related travel guides

Dearest, I wanted to thank you for the back support had during our trip, for your organization and kindness of all the staff and guides with who have been ... 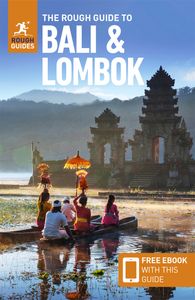 Your travel guide to Indonesia

Ready to travel and discover Indonesia?
Get support from our local experts for
stress-free planning & worry-free travels