Crossed by the five major tributaries of the Indus River, the region of Punjab (“Five Rivers”) was split down the middle at Independence, with Indian Muslims fleeing west into Pakistan, and Sikhs and Hindus doing likewise to the east. In 1966, the plains on the Indian side of the border were further divided into the predominantly Sikh Punjab and the 96-percent Hindu Haryana, and both remain governed from the purpose-built capital of Chandigarh. The states of Punjab and Haryana have both prospered on account of their position in the fertile river plain northwest of Delhi, and are often referred to as India’s breadbasket. They’re somewhat less important to international visitors, though Amritsar’s astonishingly beautiful Golden Temple is deservedly one of the country’s major draws, and Chandigarh a must-visit for fans – and such people do exist – of brutalist architecture.

Places to visit in Haryana and Punjab

The region as a whole is very important to the nation’s economy – its farmers produce nearly a quarter of India’s wheat and one third of its milk and dairy foods, while Ludhiana churns out ninety percent of the country’s woollen goods. Helped by remittance cheques from millions of expatriates in the UK, US and Canada, the states’ per capita income is almost double the national average.

Punjab contains the vast majority of tourist interest in the two states. Pride of place, of course, goes to the stunning Golden Temple in Amritsar, a hugely holy city which deserves at least a couple of days of your time – this will also enable a visit to the bizarre border ceremony, which takes place each evening just to the west in Wagha. Southeast across the plains, Patiala is a far more low-key city, and one which is not yet making the most of its array of sights – unlike Amritsar, you’ll see very few tourists knocking about here. There are a few more in nearby Chandigarh, the purpose-built state capital; concrete testament to a Corbusier vision, it’s also home to the wacky Rock Garden.

Chandigarh is also the capital of Haryana state, which has very little to detain the visitor bar the bars and modern high-rise of Gurgaon, a city which most, in any case, refer to as part of greater Delhi.

Brief history of Haryana and Punjab

Punjab’s first urban settlement was the Harappan civilization of around 3000 BC. The epic battles in the Mahabharata drew on real-life encounters between the ancient kings of Punjab at Karnal. Conquered by the Mauryans in the third century BC, the Punjab saw further action as various invaders passed through on their way from the Khyber Pass to Delhi – including the Mughal emperor Babur, who routed Ibrahim Lodi at Panipat in 1526.

Sikhism began in the region under the tutelage of Guru Nanak (1469–1539). Based on the notion of a single formless God, the guru’s vision of a casteless egalitarian society found favour with both Hindus and Muslims, in spite of Mughal emperor Aurangzeb’s attempts to stamp it out. Indeed, one result of his intolerance was that the Sikhs – eager to avoid a Mughal resurrection – willingly helped the British to quash the great uprising in 1857. Their relationship with the British only soured after the Jallianwalla Bagh massacre of 1919.

Partition in 1947 brought sectarian hatred to the surface, with an exodus of Muslims from the Indian half of the Punjab, and of Hindus and Sikhs from the Pakistani half, amid great slaughter. After Independence, the Indian part grew wealthy on its agricultural output and militant Sikhs began to press for the creation of an independent state called Khalistan. In 1966, the mainly Hindu area of Haryana was hived off, but that failed to silence the separatists, whose party, the Akali Dal, trounced Congress in state elections.

With covert support from the national government (who saw the group as a way to defeat the Akali Dal), a more radical separatist movement led by Sant Jarnail Singh Bhindranwale began a campaign of sectarian terror, coming to a head in 1984 with the occupation of Amritsar’s Golden Temple. Indira Gandhi’s brutal response, Operation Blue Star, plunged the Punjab into another ugly bout of communal violence. Four years later, a less threatening occupation of the temple was crushed by Operation Black Thunder. Most Akali Dal factions boycotted the 1992 elections, which saw Congress returned on a 22 percent turnout. Chief minister Beant Singh was killed by a car bomb in 1995, but that was the militants’ last gasp. Public support had ebbed and subsequent state elections have seen a return to normality. An Akali Dal/BJP coalition – thrown out by Congress in 2002 – regained power in 2007, and held it in 2012, with voter turnout back to normal and no paramilitary violence.

As ever in northern India, spring (March–April) and autumn (Oct & Nov) are the best times to visit. Winter (Dec & Jan) can be rather nippy, and summer (June–Aug) very hot, although nothing like the south, of course. Summer is also the wettest season, with rainfall peaking in August, but the monsoon is largely spent by the time it gets this far, so it isn’t anything like as full-on as it is further south and east.

Festivals in Haryana and Punjab

The dusty town of Pathankot, 270km northwest of Chandigarh and 101km to the northeast of Amritsar, is an important cantonment and railway junction, close to the frontier with Pakistan and near the borders with Himachal Pradesh and Jammu. Pathankot itself is a friendly enough place, but there’s nothing special to see here, and most travellers just pass through to pick up bus connections to Dharamsala, Dalhousie, Chamba and Kashmir, or to take the slow train east through the picturesque Kangra Valley.

The capital of a princely state under the Raj, and a city with much charm and few visitors, Patiala dates back to the early eighteenth century. It was founded as the capital of a state that featured a unique power-sharing arrangement, in which the maharaja was always a Sikh and the army commander a Muslim. Buffeted by rival powers, be they Hindu, Muslim or Sikh, Patiala’s maharajas finally secured their state’s survival in 1808 by allying themselves with the British. Like India’s other princely states, Patiala was absorbed into the Republic in 1947, but the city remained capital of its own state (the Patiala and East Punjab States Union, aka PEPSU) until 1956. To this day, there’s still something special about Patiala, and even the local measure of whisky – the Patiala peg – is bigger than a standard peg that you get elsewhere. The old city is full of bazaars and temples, and still has its fort and several of its original gates, although the walls are long gone. The tourist board have designated a self-guided “heritage walk” around the city’s main sights, with signposts marking out the route, although they’re a bit patchy, and a map is more helpful.

Essentially the only place of note in Haryana state, and now in a slow-motion process of being rechristened “Gurugram”, Gurgaon is effectively a satellite city of Delhi, though it draws young people from the capital in their droves for two big reasons. Firstly, relaxed licencing laws have made for a simply ridiculous number of brewpubs, with a full dozen of them staring at each other out in Sector 29. Secondly, and more importantly, a lack of historical and cultural baggage has seen the city become, in parts, more modern than Delhi, especially in the gleaming, high-rise Cyber City area – here, in its umpteen bars and eateries, you’ll often hear Delhi millennials wondering aloud why their city can’t be more like this, and it’s not hard to imagine their wishes coming true after the next generational shift. 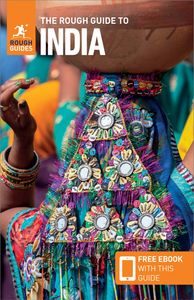