Enjoying a superb setting overlooking the Bahía de Amatique, LÍVINGSTON offers a unique fusion of Guatemalan and Caribbean culture where marimba mixes with Marley. The town acts as a hub for both the displaced Garífuna, or Black Caribs and also for the Q’eqchi’ Maya of the Río Dulce region.

Lívingston is undoubtedly one of the most fascinating places in Guatemala, but travellers’ opinions about it tend to be sharply divided: many enjoy the languid rhythm of life and Lívingston’s slightly ramshackle appeal while others just find the town shabby. Whatever your take, Lívingston certainly offers a welcome break from mainstream Ladino culture: Carib food is generally excellent and varied, and Garífuna punta rock and reggae make a pleasant change from merengue and salsa. Another excellent reason to come to Lívingston is to take the spectacular trip through the Río Dulce gorge.

The general atmosphere is pretty chilled, but not unaffected by the pressures of daily life in Central America. Whilst Lívingston is not a threatening place, and there are no particular security concerns, the town does have its share of small-time hustlers eager to sell weed to travellers or scrounge a beer.

Fiestas in Lívingston, on Guatemala’s Caribbean coast, have different traditions and swing to other rhythms. Some of the best dancing you’ll ever see is to the hypnotic drum patterns of Garífuna punta, which betrays a distinctive West African heritage. The Garífuna really know how to party, and if you get the chance to attend a fiesta, be prepared for some explosively athletic shimmying and provocative hip movements – nineteenth-century Methodists were so outraged they called it “devil dancing”. Garífuna day (Nov 26) is the ideal time to see Lívingston really celebrate, though there seems to be a punta party going on most weekends.

The Garífuna people trace their history back to the island of St Vincent in the eastern Caribbean. In 1635 two Spanish ships carrying slaves from Nigeria were wrecked off the island, and in the following decades the survivors mixed with resident Amerindians, forming an Afro-Carib race. In their own language, they are Garinagu, or Garífuna “cassava-eating people”.

For years attempts by the British to gain control of St Vincent were repelled by the Garífuna, who were aided by the French. In 1783 the British imposed a treaty on the Garífuna, but they continued to defy British rule until 1796, when, after a year of bitter fighting, the French and the Garífuna surrendered.

The colonial authorities could not allow a free black society to survive, and a decision was made to deport the Garífuna, who were mercilessly hunted down. Hundreds died of starvation and disease. In March 1797, the remaining 2200 or so Garífuna were loaded aboard ships and sent to Roatán, one of the Honduran Bay Islands, where they were abandoned.

Most Garífuna migrated from Roatán to the mainland where they worked as labourers, farmers and soldiers. In 1802, 150 Garífuna were brought as wood-cutters to southern Belize, from where they moved to Lívingston in 1806.

By the start of the twentieth century, the Garífuna were well established in the Lívingston area, with the women employed in bagging and stacking cohune nuts and the men working as fishermen. The Garífuna continued to travel widely in search of work, particularly in the merchant navy. Since the 1970s, many have left Central America for the US, where there’s now a fifty thousand strong population in New York. Today most Garífuna live in villages along the Caribbean coast of Honduras (where they number more than one hundred thousand) with smaller populations in Belize (around twenty thousand) and Nicaragua.

Most Garífuna speak Spanish (and some English) plus the unique Garífuna language that blends Arawak, Carib, French, English, Spanish and a few African words. Though virtually all worship at church, their Afro-Carib dugu (religion) – centred on ancestor worship – continues to be actively practiced. Dugu is immersed in ritual, and death is seen as the freeing of a spirit, a celebration that involves dancing, drinking and music.

Garífuna music, or punta, is furiously rhythmic, characterized by mesmeric drum patterns and ritual chanting, and it’s very easy to hear its West African origins. The late Andy Palacio is the most renowned Garífuna musician; his 2007 album Wátina is considered his masterpiece. Critically acclaimed Umalali: The Garífuna Women’s Project is another superb compilation of Garífuna music.

For many Guatemalans, the Garífuna remain something of a national curiosity. They are not only subjected to discrimination, but also viewed with a strange awe that gives rise to a range of fanciful myths, including accusations of voodoo. Such prejudices, and the isolated nature of the community – numbering only around eight thousand in Guatemala – mean many young Garífuna are more drawn to African-American (hip-hop) and Jamaican (rastafari) influences than to Latin culture.

A fantastic experience with excellent organisation,superb guides with knowledge in all as history,nature etc 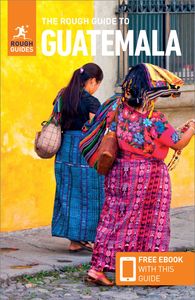