Sun-drenched beaches, turquoise lagoons, swaying palm trees – Fiji supplies all the classic images of paradise. No wonder, then, that every year thousands of travellers come to this South Pacific archipelago for the ultimate island escape. With over three hundred islands to choose from, Fiji is an amazingly versatile destination. Whether you’re after a luxury honeymoon retreat, a lively backpacker island or a family-friendly resort you won’t be disappointed. You’ll also find a warm, hospitable people, an intriguing blend of Melanesians, Polynesians and Indians.

With a reliable tropical climate, a good tourist infrastructure, English as its main language and no jabs or pills to worry about, travelling in Fiji is as easy as it gets. As the hub of South Pacific tourism, the country attracts over half a million visitors a year, mostly from Australia and New Zealand, its largest “neighbours” lying over 2000km southeast. Of the northern hemisphere travellers who arrive, many are backpackers from Europe or surfers and scuba divers from North America.

While it can be tempting to spend your whole time in Fiji sunbathing and sipping cocktails from coconuts, there are plenty of activities to lure you away from the beach. Within a ten-minute boat ride of most resorts you can find yourself snorkelling with dolphins and manta rays or scuba diving at pristine coral reefs. In addition, at the exposed edges of the reefs are some of the world’s finest and most consistent surfing breaks. Nature lovers are also spoilt for choice, both underwater and on dry land, and wildlife-spotting opportunities are plentiful, whether you’re seeking turtles, exotic birds or 3m-long tiger sharks.

Away from the resorts is another Fiji waiting to be discovered: a land of stunning mountains, rainforests and remote villages. Here you’ll find fantastically hospitable Fijians living a similar lifestyle to their tribal ancestors. Staying a night or two at a village homestay will give you an authentic insight into ethnic Fijian culture as well as the chance to sample yaqona or kava, the national drink. Fiji is also home to a large Indian community and their influence is seen in the delicious Indian food served in almost every town, Bollywood films showing in the cinema and vibrant Hindu festivals celebrated throughout the year. While Fiji is not renowned for its towns or cities, three are definitely worth taking the time to explore: quaint, colonial-era Levuka, yachting hotspot Savusavu, and Suva, the lively capital city and the best place to party in the South Pacific.

However long you spend in the country you’ll notice an unhurried, good-humoured lifestyle. This is the essence of Fiji Time – an attitude that can be both inspiring and infuriating. Away from the highly organized upmarket resorts, life runs at a different pace; bus and ferry timetables serve more as guidelines and a simple meeting in a village can last for days. It’s best to leave your inner control freak at home – you never know, you may come back a calmer person.

Where to go in Fiji

The vast majority of travellers arrive at Nadi International Airport on Viti Levu, the biggest island in the archipelago. Most stay around the suburban tourist hub of Nadi for a day or two to organize travels to other parts of the country, or use it as a convenient base for exploring the surrounding countryside and offshore islands. The most popular destination in Fiji lies visible off Nadi’s coastline – a gorgeous collection of islands known as the Mamanucas. Here you’ll find sublime beaches and tiny coral cays with suitably exotic names such as “Bounty” or “Treasure Island”. Extending north of the Mamanucas are the Yasawa Islands, a string of larger, volcanic islands home to a mixture of budget beach resorts and upmarket boutique accommodation.

Almost as popular as the Mamanucas and Yasawa Islands, especially with families, are the beach resorts of the Coral Coast along the south coast of Viti Levu. Around an hour’s drive from Nadi, these larger resorts offer good value all-inclusive packages and a great choice of sightseeing tours. Inland is the rugged rural interior of Viti Levu. This region was once home to fierce, cannibalistic hill tribes and is crisscrossed with hiking trails including the route to Fiji’s highest peak, Mount Tomanivi. Heading east along Viti Levu’s south coast brings you to Pacific Harbour, Fiji’s adventure tour capital offering whitewater rafting, jet-ski safaris and world-renowned shark dives off the nearby island of Beqa. Beyond is Suva, Fiji’s cosmopolitan capital city and the hub for sea transport throughout the archipelago.

Of the outer islands, the most accessible are in the Lomaiviti Group, a short trip by boat from the east coast of Viti Levu. Here you’ll find the quirky former capital of Levuka on the island of Ovalau and a good range of budget island resorts – a less commercial alternative to the Mamanucas and Yasawas. Spreading east for hundreds of kilometres is the vast Lau Group. Reached by cargo boat from the mainland, these islands provide a true adventure for the intrepid traveller and the chance to sample Polynesian culture. South of Viti Levu is the snaking shape of Kadavu, a magnet for scuba-divers thanks to the impressive Great Astrolabe Reef.

Fiji’s second largest island, Vanua Levu, is in the northern part of the archipelago. On its south coast is the beautiful sailing anchorage of Savusavu while to the east is Taveuni, Fiji’s lush “Garden Island”. Half of Taveuni is protected as a national park and it’s the best place in Fiji to hike through rainforest and encounter the country’s rare, native birdlife. Offshore is the stunning Rainbow Reef, aptly named after its colourful soft corals. Far north of Vanua Levu, the tiny Polynesian island of Rotuma is politically part of Fiji but so isolated it feels like a different country, with its own language, culture and traditions.

Fijian resorts range from simple beachside bures (traditional thatched huts) with cold-water showers to opulent villas with hardwood floors and private spa pools. With almost a hundred resorts throughout the islands the choice can be overwhelming. To help you decide, we’ve whittled them down to six of the best, each aimed at a different type of traveller.

Six of the best resorts

• Fiji is made up of 333 islands and many tiny islets. Two thirds of Fiji’s islands remain uninhabited.

• The name Fiji is an adaptation of the Tongan pronunciation of “Viti”, originally written by Europeans as “Feejee”.

• Only four of Fiji’s 27 airports have paved runways.

• At New Year on the islands, women play a game called veicaqe moli – “kick the orange”. The winners have to give new clothes to the losers, and the losers’ job is to serve the victors yaqona.

• Around a fifth of ethnic Fijians live a mostly subsistence lifestyle on tribally owned native land (87 percent of all land in the country).

A huge part of Fiji’s appeal lies below the surface of the waves. Don a mask and snorkel and you will find coral reefs shimmering with colourful fish, sea fans dancing in the current and manta rays and reef sharks cruising the lagoons. Throw in crystal-clear water and temperatures that rarely fall below 25°C and you have one of the world’s greatest snorkelling and diving destinations.

Fiji’s ten thousand square kilometres of coral reef twist and turn around every island, and include the world’s third longest barrier reef – the 200km-long Great Sea Reef found off the north coast of Vanua Levu. These amazing structures provide habitats for thousands of species of fish, plants and animals and boast an astonishing biodiversity that’s comparable to that found in rainforests.

The three most common types of reef found in Fiji are fringing reefs, which are attached to an island and offer snorkelling direct from the shore; patch reefs, individual coral reefs found within a lagoon and usually attracting great numbers of reef fish; and barrier reefs, which are separated from the shore by a deep channel and feature steep drop-offs and strong currents. There’s information on Fiji’s best reefs, plus snorkelling and diving advice.

From travel safety to visa requirements, discover the best tips for traveling to Travel Guide Fiji 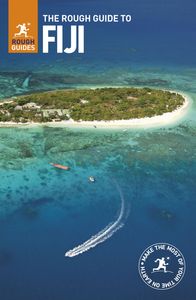