The Valle Central and the highlands Travel Guide

Costa Rica’s Valle Central (“Central Valley”) and the surrounding highlands form the cultural and geographical fulcrum of the country. Rising between 3000 and 4000m, this wide-hipped inter-mountain plateau – often referred to as the Meseta Central or “Central Tableland” – has a patchwork-quilt beauty, especially when lit by the early morning sun, with staggered green coffee terraces set in sharp contrast to the blue-black summits of the nearby mountains.

Great places to visit in this region of Costa Rica

Many of these are volcanoes – the Valle Central is edged by a chain of volcanic peaks, running from Poás in the north to Turrialba in the east – and their volatile nature can sometimes give the region an air of unease. The sight of Poás, Irazú and Turrialba spewing and snorting, raining a light covering of fertile volcanic ash on the surrounding farmland, is a fairly common one, though seismic activity over the last couple of years has been a lot more significant: in January 2009, an earthquake devastated the area around Poás, and a year later Turrialba erupted for the first time in nearly 150 years, causing nearby villages to be evacuated.

Brief history of the Valle Central

Little is known about the Valle Central’s indigenous inhabitants, except that they lived in the valley for at least 12,000 years, cultivating corn and grouping themselves in small settlements like the one excavated at Guayabo, near Turrialba.

In 1560, the Spanish started to colonize the area, founding Garcimuñoz, in the west of the region, in 1561, and a further settlement at modern-day Cartago three years later. Though the first settlers found fertile land, the rich-pickings that they had expected didn’t materialize: the region had few settlements and no roads (until 1824 there was only the Camino Real, a mule path to Nicaragua, and a thin ox-cart track to Puntarenas) and, crucially, far less free labour than they had hoped – the indigenous population proved largely unwilling to submit to Spanish rule, either to the system of slave labour, known as encomienda, or to the taxation forced upon them. Some tribes and leaders collaborated with the settlers, but in general they did what they could to resist the servitude the Spanish tried to impose, often fleeing to the jungles of Talamanca. Forced to till their own fields, many of the first settler families ended up living in as “primitive” a state as the peoples they had hoped to exploit. Indeed, money was so scarce that in 1709 the settlers adopted the cacao bean – the currency of the indigenous peoples – as a kind of barter currency, and it was used as such until the 1850s, when it was finally replaced by officially minted coins.

In 1808, Costa Rica’s governor, Tomás de Acosta, brought coffee here from Jamaica; a highland plant, it flourished in the mineral-rich soil of the Valle Central. Legislators, keen to develop a cash crop, offered incentives to farmers – San José’s town council gave free land and coffee seedlings to settlers, while families in Cartago were ordered to plant coffee bushes in their backyards. In 1832, there were enough beans available for export, and real wealth – at least for the exporters and coffee brokers – came in 1844, when the London market for Costa Rican coffee opened up. It was the country’s main source of income until war and declining prices devastated the domestic market in the 1930s.

Heredia and Cartago provinces still earn much of their money from coffee, and today the Valle Central remains the most economically productive region in the country. Fruit, including mangoes and strawberries, is cultivated in Alajuela; vegetables thrive in the volcanic soil near Poás and Irazú; and on the slopes of Irazú and Barva, Holstein cattle provide much of the country’s milk. Venture anywhere outside the urban areas and you will see evidence of the continued presence of the yeoman farmer, as small plots and family holdings survive despite the population pressure that continues to erode available farmland.

Although occupying a relatively small area, the fertile Valle Central supports roughly two-thirds of Costa Rica’s population, the majority of whom live in San José or one of the provincial capitals of Alajuela, Heredia and Cartago. The tremendous pressure on land is noticeable even on short forays from San José: urban areas, suburbs and highway communities blend into each other, and in some places, every spare patch of soil sprouts coffee bushes, fruit trees or vegetables.

Away from the big cities, the countryside is blanketed by coffee plantations – several of which can be explored on tours – though sizeable tracts of land have been protected around the valley’s fringes, most noticeably at Parque Nacional Braulio Carrillo and Parque Nacional Tapantí-Macizo Cerro de la Muerte. In addition to the volcanoes and their surrounding national parks, the region boasts white-water rafting on the Río Pacuaré near Turrialba; craft shopping at Sarchí, a convenient if crowded place to stock up on souvenirs; and ancient ruins at Guayabo, Costa Rica’s most visited archaeological site.

While the provincial capitals each have their own strong identity, there is little in them to entice you to linger – with the exception of Alajuela – and most people use San José as a base for forays into the Valle Central or stay at one of the lodges and inns scattered throughout the countryside. Many Ticos commute from the Valle Central and the surrounding highlands to work in San José via an efficient bus network. However, some interesting areas – notably Irazú and Tapantí – remain frustratingly out of reach of public transport. In many cases the only recourse is to rent a car, though this is expensive and the mountainous terrain and narrow, winding, unlit roads can make driving difficult, if not dangerous. A better option perhaps is to take a taxi from the nearest town, or join an organized tour from San José or one of the provincial capitals.

Coffee in the Valle Central

Some of the world’s finest coffee grows on the cultivated slopes of the Valle Central, and a number of the region’s fincas and estates run tours of their plantations, which take you through the process from planting and picking to drying and roasting. The area is home to five of the country’s eight regional coffee varieties: from west to east, they are the Valle Occidental, the Valle Central, Tres Ríos, Orosí and Turrialba. Differences in altitude, soil composition and production methods mean that the beans harvested from each estate have their own individual characteristics, which a good barista (professional coffee-taster) can help you detect. Coffee-tasting, or cupping (catación), is an art in itself, and at the end of most tours you’ll learn how to measure a cup’s uniformity, its complexity, dry fragrance, wet aroma, brightness (actually its acidity) and body, as well as the finish it leaves on the palate.

The following fincas and estates are open year-round but are best visited during the picking season (Oct–Feb), when you can often get involved in harvesting the bright red beans and roasting them yourself:

Tours around the Valle Central

One easy, albeit fairly whistle-stop, way of visiting the Valle Central’s major sights is on a tour from San José. All kinds of packages exist, but some of the most popular are organized by Expediciones Tropicales. Their full-day tour of the northern Valle Central visits Volcán Poás, the Doka coffee estate and the La Paz Waterfall Gardens, while their jaunt around the southern highlights takes in Volcán Irazú, the botanical gardens at Lankester and the beautiful Valle Orosí.

While the provincial capitals each have their own strong identity, there is little in them to entice you to linger – with the exception of Alajuela – and most people use San José as a base for forays into the Valle Central or stay at one of the lodges scattered throughout the countryside.

Getting around Valle Central

Many Ticos commute from the Valle Central and the surrounding highlands to work in San José via an efficient bus and train network. However, some interesting areas – notably Irazú and Tapantí – remain frustratingly out of reach of public transport. In many cases the only recourse is to rent a car, though this is expensive and the mountainous terrain and narrow, winding, unlit roads can make driving difficult, if not dangerous. A better option perhaps is to take a taxi from the nearest town, or join an organized tour from San José or one of the provincial capitals. Note that congestion around the capital is increasingly bad, particularly during the morning and late afternoon rush hours.

The Rough Guide to Costa Rica and related travel guides

We had a fantastic time in Costa Rica and we would like to thank you for your great organisation of our tour. The hotels were very good and the drivers als ... 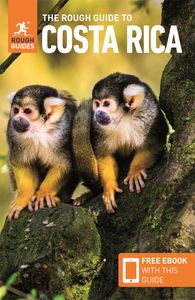 Your travel guide to Costa Rica

Ready to travel and discover Costa Rica?
Get support from our local experts for
stress-free planning & worry-free travels