Eating and drinking in Colombia

Whether it’s a platter full of starch or a suckling pig stuffed with rice, Colombian food is anything but light. Breakfast usually consists of huevos pericos, scrambled eggs with onion and tomatoes, accompanied by a fried maize pancake (arepa) stuffed with chopped pork, rice, potatoes and more. The midday almuerzo or comida corriente consists of soup, a main course and dessert. Dinners, after 6pm, also tend to involve meat or fish.

In Bogotá and other major cities there is an excellent array of Western and international cuisine.

Each region in Colombia has its own local speciality. The national dish is the bandeja paisa – an enormous platter of ground beef, chorizo, beans (frijoles), rice, fried banana (plátano), a fried egg, avocado and fried pork – usually found at inexpensive market stalls (fondas).

In rural areas, vegetarians will be hard-pressed for options, but in medium and large cities you can find a decent spread of vegetarian dishes.

Other Colombian favourites include ajiaco (a thick chicken stew replete with vegetables, maize, three types of potato, cream, capers and sometimes avocado), and mazamorra (a similar meat and vegetable soup but with beans and corn flour). Both are often served with patacón, a mashed and heavily salted cake of fried plantain.

More unusual regional specialities include hormigas culonas – fried giant ants, found in the Santander area. In Cali and southern Colombia, grilled guinea pig, known as cuy or curí, sometimes crops up on the menu. The coast is renowned for its fish and shellfish, served with aromatic arroz con coco, slightly sweet rice with caramelized coconut, while the Amazon is known for its unusual and delicious fish. The islands of San Andrés and Providencia specialize in locally caught crab dishes and lobster.

Though Colombia used to export its best coffee, demand from travellers has led to a proliferation of Juan Valdéz café branches; good coffee is now available in other establishments as well, though the majority of Colombians still drink heavily sugared, watered-down black coffee (tinto).

Beer is reasonably good and inexpensive (try light, fizzy lagers like Dorado, Club and Aguila). Far more popular among locals is the anise-flavoured aguardiente, pure grain alcohol, and rum (ron), both of which are drunk neat. Brave souls won’t want to pass up any offer to try chicha, a frothy drink, often prepared with maize or yucca, found in rural areas and made with the fermenting enzyme found in saliva: pieces of the peeled root are chewed, spat into a bowl and the juice is left to ferment.

Dotting the country’s streets are vendors who will happily blend drinks for you from the juicy bounty in their baskets, either with milk (con leche), or the standard ice and sugar (con agua).

Corozo - A round, maroon-skinned fruit, not unlike a cranberry in tartness.

Guanabaná - Pulpy, yellow fruit that tastes like a mild guava, with a touch of grapefruit.

Mora - Close cousin of the blackberry.

Níspero - This combination of pear and papaya is rich and musky, and goes really well with milk.

Tomate de árbol - Literally, “tree tomato”, this orange-red fruit blurs the line between fruit and vegetable, being sharp and only faintly sweet.

Zapote - This luscious orange fruit’s uncanny resemblance to sherbet is confirmed by the tendency of some locals to freeze its pulp to eat as dessert.

The Rough Guide to Colombia 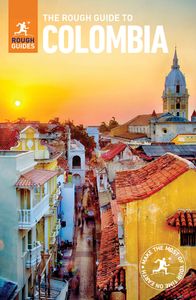 Your travel guide to Colombia

Ready to travel and discover Colombia?
Get support from our local experts for
stress-free planning & worry-free travels