Living the past: the ancient professions of Old Delhi

Modernity is seeping into Old Delhi, a walled district that has long harboured the Indian capital’s traditional ways of life. But what does this mean for long-standing Delhi-wallahs and their archaic practices? Jack Palfrey reports on a city in flux.

The traffic splutters and snarls but remains stationary. The once resplendent Chandni Chowk, Old Delhi’s famed Moonlight Bazaar, is clogged like one of its litter-filled drains.

I’m sitting in a bicycle rickshaw; a fan seller tugs at my arm (“very much hot today sir”), while a sadhu (holy man), in the distinctive sunset-saffron robe, stretches a hopeful hand towards me. My driver, oblivious, rambles about his cousin, who spent a year studying somewhere in England and disapproved of the bland British cuisine.

This is the Old Delhi of today. The former opulent walled capital of the grand Mughal Empire that has deteriorated into a snubbed suburb of British-built New Delhi.

Hectic and humbling, it’s a microcosm of forgotten India; a rambunctious refuge safeguarding the capital city’s oldest, and most fascinating, ways of life.

Now, after centuries of neglect, change is stirring in the Old Delhi neighbourhood.

A million-dollar project to increase accessibility to the area via three new metro stations is raising the district’s profile, leading to growing investment in infrastructure and new business ventures.

But what does modernisation mean for long-standing Delhi-wallahs and their alluring ancient traditions? Here, three men plying some of the city’s oldest trades share their stories.

Malkan Singh is bent over his first patient of the day, who sits cross-legged on the floor, mouth ajar and neck craned into position. After a short examination Malkan reaches for a long thin chisel and begins mercilessly scraping at one of the man’s back molars.

“Tooth fitting,” Malkan explains when the ordeal is over.

Malkan, 38, learnt dentistry from his father when he was just 12 years old, assisting him at his own street-side stall. The passing of the years has not dimmed Malkan’s enthusiasm for his work.

He details the complicated procedure to me, which involves wiring a shaped metal "tooth" into a patient’s mouth, as we sit at his makeshift practice; a red sheet spread beneath a white fig tree on a dusty stretch of pavement.

“Not if you’re good,” he replies with a grin.

“I feel very happy when I see the customer is satisfied – I still enjoy that feeling,” he says.

However, modernity and societal changes have altered how street dentists such as Malkan are perceived by the residents of Old Delhi. This has resulted in a shift in clientele.

“I used to attend only one or two customers a day and make good money. Now those people have probably moved up to going to a [conventional] dentist, and only rickshaw pullers, labourers and people who cannot afford a dentist come to me. Those with very little money,” Malkan says with a shake of the head.

Opposite, behind tended green gardens, the grand sandstone walls of the Red Fort imbues a lingering majesty.

The shift to less affluent customers has led many street dentists to abandon the trade. On this stretch of road alone there were once 25 street dentists, now there are just four, a trend Malkan fears is likely to continue if big-budget investments such as the metro project successfully gentrify the district.

“If it gets to a point where people like me aren't allowed to sit on the street anymore, then business will of course be affected,” he says.

Does he think that could happen?

“This city changes so much I don’t even know what is going to happen in the evening,” he says wiping down his tools. “Only God knows.”

Across the road, in a forgotten alleyway, Mohammad Thasin sits at his usual bench – the same bench he has sat at every day for the last 32 years – sketching silently; intricate ink strokes scratched onto crisp card.

“Ten years ago I wouldn’t have been able to talk to you,” he says, laying his wooden utensil down. “I was so busy working I didn’t even have time to eat.”

Nothing can match the hand's work. You can see the love that has gone into it

Mohammad started drawing as a hobby, sneaking into movie theatres after school and sketching the characters he saw on screen. He began selling his work, and due to his ability to write in English, Hindi and Urdu, made a good living as a professional scribe, regularly producing posters, signs and pamphlets.

But that all changed with the introduction of computers, allowing text and images to be produced and printed cheaply.

Mohammad survives on a handful of regular clients who are happy to pay a little extra for hand-drawn work, which, in his opinion, is vastly superior to the digital offering.

“There is no texture [in digital work],” Mohammad says dismissively, “Nothing can match [the] hand's work. You can see the love that has gone into it.”

The warm evening air echoes with the calls of chai-wallahs (tea sellers) who patrol the alleys in search of thirsty punters. Mohammad orders us two glasses. The chai-wallah waits patiently.

While a traditionalist in many respects, Mohammed is positive regarding recent changes he has witnessed in his hometown.

“It is much cleaner now,” he says sipping his chai. “The roads are better and there are many new buildings.”

He acknowledges his profession, and those who ply it, are confined to the past

He is equally positive about the planned metro project, sharing his hopes that it will restore some prestige to the once-grand neighbourhood by improving transport links. But he acknowledges his profession, and those who ply it, are confined to the past.

“It is going to die,” he says glumly. “In five to ten years there will be no more calligraphers in Delhi.”

Mohammad drains his glass and hands it to the waiting chai-wallah. We watch him trudge off into the molten-copper sunset, which appears ever so slightly less dazzling.

The cleansing scent of burning juniper stings my eyes as I sit on a bench in Abdur Rahim’s smoky, single-roomed surgery.

A wide-eyed Delhi-wallah with a wispy white beard sits next to me looking anxious, our backs to a weathered mahogany cabinet from which various vials, jars and bottles spill out onto the floor. In the warren of lanes outside, thick electrical wires dangle like jungle vines. A goat peers in through the open doorway.

This practice has long died out across central Asia, including in the areas where it was founded

“First I need to feel your pulse,” says Abdur, addressing me from behind a desk laden with browning medical journals.

Based upon the work of Hippocrates and Galen, traditional Unani medicine was brought to India in the 13th century by refugees fleeing Genghis Khan. While the practice has long died out across central Asia (including in the areas where it was founded), here it has miraculously managed to endure.

“Unani medicine states there are four elements in the body from which we decipher pain: the heart, brain, liver and kidney,” explains Abdur, clasping my hands in his.

Hakims diagnose which element requires attention through the vibrations of a patient’s pulse. Once the problem is identified, a natural remedy of herbs and roots is prescribed to restore the body’s equilibrium, often accompanied by a change in lifestyle.

Abdur pauses and surveys my palms quizzically: “Your lines are a little off,” he tells me, “take off your shirt.”

I stand topless in the centre of the surgery while Abdur measures the distance between my navel and both nipples with a green strip of fabric.

“You are unbalanced,” he says. “Have you been experiencing excess gas?”

My cheeks redden as I glance at the elderly Delhi-wallah, who thankfully appears disinterested in proceedings.

Eager to change the subject I ask Abdur why locals opt to visit his surgery over conventional doctors.

“If a patient comes to me with a headache I will go to the root of the problem and solve it,” says Abdur. “A regular doctor will just hand out painkillers.”

Though Abdul has not seen a drop in patient numbers over the last 10 years, he is wary of a growing effort to standardise and integrate the practice into conventional medicine. Though this would likely aid the spread of the practice, it may ultimately spell an end to the wondrous ramshackle surgeries of the Old Town.

“I will do this for as long as I can,” Abdul says, taking a seat back behind his desk. “Hakims have practised in Old Delhi for 400 years. We are not disappearing yet.” 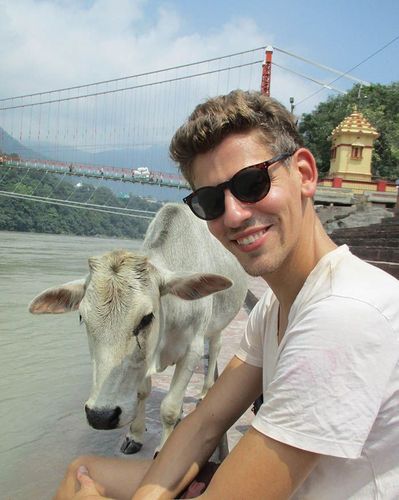