The 20 best beaches in Turkey

Beach holidays in Turkey are often synonymous with (mostly) British tourists occupying row after row of sun loungers, rowdy club nights and expensive all-inclusive resorts. However, using public transport, or your own car, you can get to some of the best beaches in Turkey in no time. Meet the loggerhead turtles who bury their eggs in the protected sands of Çiralı or escape the tourist haven of Bodrum – Turkey’s favourite beach holiday destination – and find secluded coves just down the coast.

Turtles and tourism coexist on the protected 4.5km of hard-packed sands of Iztuzu beach. Tracks emerging from the sea are visible on the sand in June and July, where turtles have dragged themselves ashore to lay their eggs, and the marshes behind the beach are often alive with other wildlife too. While lack of shade is often a problem on this beach, the gently shelving seabed calms the choppy waters, making Iztuzu excellent for children.

Pantara’s fine white-sand beach ranks as one of the longest continuous strands in the Mediterranean: it measures 9km from the access road to the mouth of the Eşen Çayı, and then another 6km to the end. In season the immediate vicinity of the beach entrance gets crowded, but walking northwest past the dunes brings you to plenty of solitary spots. Spring and autumn swimming is delightful, but in summer the exposed shoreline can be battered by body-surfable waves.

The small village of Kabak is the perfect place to escape package holiday groups and most visitors come here to chill out in one of the many wooden huts and bungalows, set in the pine-forested valley behind the sand-and-pebble beach. Wear mosquito repellent in the summer though, as these pesky insects are everywhere.

This laidback resort, shrouded in citrus groves, is situated on a narrow plain between the mountains and a long, curving 3km-long shingle beach. It is possible to walk along the beach to the ruins of ancient Olympos, as well as longer hikes on the Lycian Way, which blazes its way through the settlement. The fact that Çiralı is safeguarded by various Turkish bodies for its unique ecology has enabled threatened loggerhead and green sea turtles to continue laying their eggs here – so don’t dig up, litter or nocturnally illuminate the beach during the summer nesting season.

Heading north from Olympos, there’s scant pretext to stop before Antalya – but ancient Phaselis, with its superb swimming opportunities, will certainly tempt you off the main road. The ruins of Phaselis flank three small bays, providing ample opportunity to contemplate antique monuments while lying on the beach. The natural beauty of the clear sea makes for a rewarding half-day outing – bring a picnic if you don’t fancy the car-park snack caravans.

Sitting beneath the gently undulating countryside of Bozcaada there are a few good beaches, the most developed being Ayazma, which offers watersports and sunbeds. The next bay west, Sulubahçe, has good broad sand but no parking, but for the best beaches head to the secluded, sandy Beylik cove or Aqvaryum bay, tucked scenically to one side of the Mermer Burnu cape.

Belediye Plaji is a long stretch of sandy beach that’s backed by low cliffs oozing with fossils. Sadly, in summer, campers’ rubbish and semi-permanent tents can blight this beautiful landscape, but with your own transport, heading north, several more almost empty beaches – some of the most stunning and undeveloped in Turkey – lie within reach.

Arguably the best (and closest) of several south coast beaches, just 10km from the town, this beach is 1500m of sugary blonde sand, lapped by warm, pristine water. The salt lake just inland is a major habitat for migratory birds, especially flamingos, and the entire area is supposedly a protected reserve – though this has neither prevented tourist development nor deterred Balkan tourists from wallowing in the shoreline’s black mud, said to have healing properties.

This is the final beach along the Gökçeada coastline. 3km west of little Uğurlu fishing port. It has no facilities but fine sand and a pine-grove backdrop make this a worthwhile and relaxing stop. 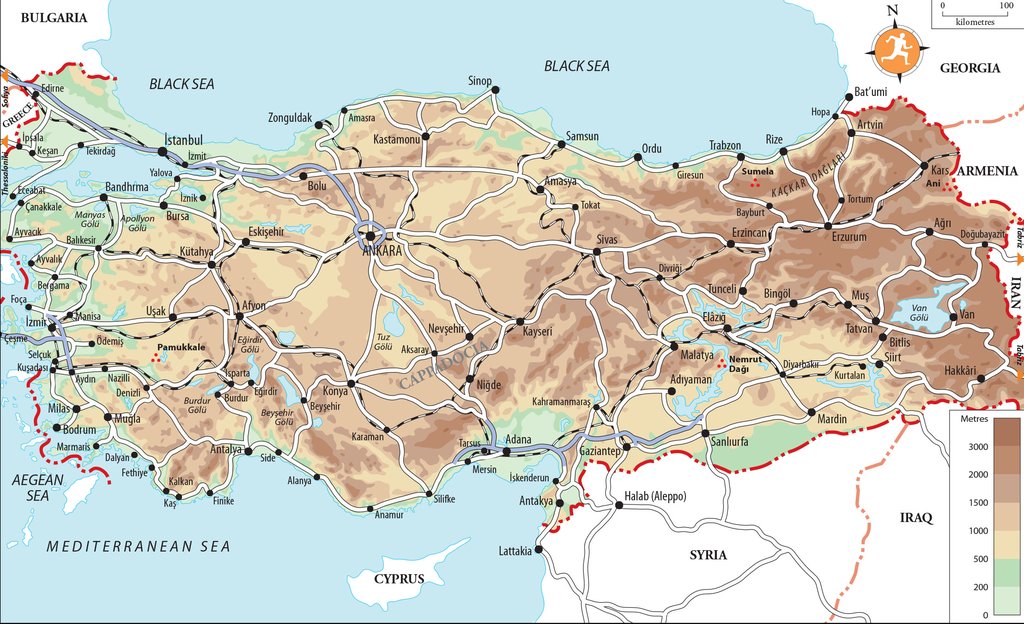 Some excellent beaches are dotted along the scenic 20km road that separates Foça from Yeni Foça. However, they’re only accessible by foot or by paying fees to the campsites that own them. The best sand is at Acar Kamping (after 10km), but 700m before that, paths from the roadside lead down beneath some high voltage power lines to a succession of idyllic coves opposite an islet.

On the Black Sea coast in northern Turkey, this beach is a fine stretch of white sand backed by pine forests and picnic areas and is less frequented than the other beaches – however, unpredictable currents can make swimming dangerous here.

The most visited portion of the unrestricted zone of Dilek National Park has four good, but often windswept, beaches. The prettiest of them all is Karasu, a 700m stretch of gravel, perfect for swimming. Stand in the sea for long enough and the fish will nibble on your toes.

For unique windsurfing and kiteboarding conditions, head to a 300m-long sandy beach, just 4km south of Alaçatı, one of the most upmarket locales on the Aegean coast. The strong, reliable “Meltemi” wind, combined with shallow water and lack of waves, makes this bay ideal for learners.

The main appeal of this area of the Aegean coast is the posse of beaches that fringe the city of Kuşadasi. The best beach in this whole area, 15km north of the city and accessible by minibus, is Pamucak beach – though note the sea can be rough on windy days.

The 9km of rough coast road that links Medusiye Bükü with Palamut Bükü makes a tricky prospect without your own transportation, but it’s worth the effort, as this stark setting is balanced by a kilometre-long beach of tiny pebbles, lapped by brisk clear water, with an islet offshore.

The deep canyon known as Kaputaş Gorge slashes back into the cliffs on the beautiful coastal road to Kaş, just under 6km out of Kalkan. Steps from the roadside parking lead down to Kaputaş beach, a 150m expanse of pebble and blonde sand. Kaputaş has served as the backdrop for innumerable TV advert shoots, and, unless there’s been a southerly storm, the water is crystalline.

Named after the many species that flutter about during the right seasons, Butterfly Valley beach, accessible by boat from Ölüdeniz or a rocky path leading down from the road, has golden sands and is backed by a beautiful limestone canyon just inland.

Antalya’s western beach, Konyaatı, now spruced up, is finally beginning to live up to its dramatic situation between Antalya’s cliffs and the Beydağları mountains. Shingle, rather than sand, it’s clean and well maintained. However, for fine sand head to Lara beach, 10km southeast of Antalya by bus, whose long, gentle waves make for some great swimming spots.

From watersports including parasailing and banana-boating, to activities such as go-karting and sea-lion shows, Kleopatra beach has it all. This is the most popular beach in the local area, lined with a multitude of bars, restaurants and souvenir shops as well as tattoo parlours.

It’s fair to say that the coastal resort of Bodrum has a certain reputation, but its southern flank holds some fantastic beaches. Kargı beach, somewhat quieter than other beaches in the area, which are crowded by (mostly) British tourists and lined with rowdy clubs and bars, is sandy and gently sloping, overlooked by the ubiquitous villas and a handful of fish restaurants. The next cove on, Bağla, seems initially off-putting – persevere and you’ll find some of the softest sand on the peninsula.

These 20 best beaches in Turkey have been chosen from the .

Your travel guide to Turkey

Ready to travel and discover Turkey?
Get support from our local experts for
stress-free planning & worry-free travels