How to get to Singapore

Reaching Singapore by air is straightforward: the island is one of the main air hubs of Southeast Asia and is often a stopover on one of the world's busiest long-haul routes, between Europe and Australasia, so fares can be much more competitive than you might expect. There are also budget flights linking the country with the rest of Southeast Asia, with southeastern Chinese cities including Hong Kong, with India and with many cities in Australia.

Whether you book your flight from a regular or an online travel agent or with the airline directly, it pays to buy it as far in advance as possible. Fares shoot up for travel during high season – from mid-June to early September, and over Christmas and New Year. It's also a little more expensive to fly at the weekend; the sample fares below are for midweek travel.

There are daily flights to Singapore from the UK. Singapore Airlines and British Airways all offer nonstop flights out of London Heathrow, a journey time of twelve to thirteen hours, with Singapore Airlines also flying daily from Manchester via Munich. Many European, Middle Eastern and Asian airlines offer indirect flights to Singapore, which involve a change of plane at their hub airport en route and thus take at least a couple of hours longer, though they are generally also cheaper if you're starting from one of the London airports. Conveniently, a few airlines, such as Air France, KLM or Lufthansa, can also get you to Singapore from a UK regional airport or from Ireland.

Fares from London to Singapore start at around £550 during low season, climbing to at least £650 in high season. If you're flying from a UK regional airport, it may cost you very little extra to go via a hub in mainland Europe rather than London; otherwise reckon on an extra £50–100. Fares from the Republic of Ireland come in at around €700 in low season, while in high season reckon on at least €800. All prices mentioned here include taxes.

A good time to book your tickets is during the autumn and winter as this tends to be when the airlines advertise promotional fares, valid for travel within the next six to nine months and shaving at least ten percent off regular prices. Besides the usual online agents, it may be worth contacting Lee's Travel (UK 0800 811 9888, leestravel.com) or Rex Air (UK 020 7439 1898, rexair.co.uk), both of which specialize in Far Eastern flights.

Singapore is roughly halfway around the world from North America, which means that whether you head east or west towards Southeast Asia, you have a long journey ahead. Setting off from the west coast, you'll invariably fly west across the Pacific; it's faster to fly the transatlantic route if you're departing from the east coast, though sometimes it can cost less to fly via the Pacific.

Unsurprisingly, the most comprehensive service is provided by Singapore Airlines, which operates daily direct flights from New York (nonstop from Newark – the longest scheduled passenger flight in the world at 19hr – or from JFK via Frankfurt), Los Angeles (18hr nonstop, or via Tokyo) and San Francisco (via Seoul or Hong Kong), plus several flights a week from Houston (via Moscow). Indirect flights on other airlines might not add more than a couple of hours to your journey if you're lucky with connections, and will often cost less.

The budget carriers JetStar, Tiger Airways and Scoot (an offshoot of Singapore Airlines) offer some of the best deals from Australia to Singapore. JetStar has the best coverage, with flights from cities including Melbourne, Perth, Cairns and Darwin, while Tiger Airways only flies directly between Singapore and Perth, though it offers connections from other cities; Scoot serves only Gold Coast airports. at the time of writing. From New Zealand, it's possible to fly to Singapore with JetStar from Auckland. Otherwise, the usual full-cost airlines, including quite a few Southeast Asian carriers, operate to Singapore from major cities. Flights from Auckland to Singapore take just over ten hours nonstop, while from Sydney and Perth the journey takes eight and five hours respectively.

Fares in high season are generally up to a third higher than in low season. In general, a low-season return ticket from Melbourne to Singapore can start from as little as Aus$600 on JetStar, while the same flights on a full-cost airline cost around Aus$900. From Auckland, you're looking at fares of around NZ$1300 in low season with JetStar, or nearly NZ$2000 on a full-cost carrier if you pay for flights with prompt connections.

There are nonstop flights from Cape Town to Singapore via Johannesburg with Singapore Airlines, taking around eleven hours from Jo'burg. These tend to be expensive though, costing around twenty percent more than indirect flights with a Middle Eastern airline, for which you can expect to pay around ZAR7500 in low season, ZAR9000 in high season.

Thanks to the low-cost airlines, it's easier than ever to visit Singapore as part of a wider Southeast Asian trip. AirAsia, JetStar, Tiger Airways and the Malaysia Airlines offshoot Firefly provide low-cost links with several Malaysian cities, while Berjaya Air connects Singapore with the Malaysian resort islands of Redang and Tioman. JetStar, Tiger and AirAsia, between them, also fly from many major cities and holiday destinations in Thailand, Indonesia and further afield.

Buses, trains and ferries to Singapore

Travelling to Singapore by land or sea might seem more interesting than flying, but the range of places you can do this from is surprisingly limited. At least there's a plethora of buses from Peninsular Malaysia, no major town in which is more than 12 hours from Singapore. The largest of the Malaysian bus companies is Transnasional (transnasional.com.my), which is both reliable and good value. Other companies that stand out from the crowd are the premium operators Plusliner (W plusliner.com.my) and Transtar (transtar.com.sg) which mainly serve the largest Malaysian cities, including Kuala Lumpur and Penang. Finally, there are also buses from Hat Yai in southern Thailand, a fourteen-hour slog.

The Malaysian rail network is inefficient and actually slower than the buses. Schedules change frequently (check the latest timetables at ktmb.com.my), but in general there are a few services daily from Kuala Lumpur to Singapore's Woodlands station, complemented by a couple more from Kelantan state in Malaysia's northeast. And if you've got money to burn, you could embark on the plush Eastern & Oriental Express, a fantasy evocation of what a colonial-era luxury train service might have been like had it existed in this part of the world; it chugs between Bangkok and Singapore at least monthly (orient-express.com).

No long-distance international ferry services sail to Singapore at all. The only ferries that exist operate from nearby Indonesian islands, including Bintan and Batam, plus the small southern Malaysian town of Kampung Pengerang in Johor, all of which are mainly visited from Singapore rather than being on the tourist trail in their own country. You can get a reasonable overview of Indonesian ferry services on singaporecruise.com.sg.

The Rough Guide to Singapore and related travel guides

The Rough Guide to Singapore 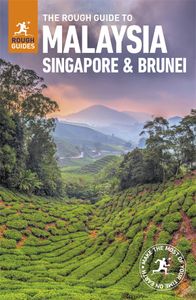 Your travel guide to Singapore

Ready to travel and discover Singapore?
Get support from our local experts for
stress-free planning & worry-free travels