Stretching nearly 400km, Guna Yala – the autonomous comarca (territory) of the Guna people – takes in the narrow band of mainland Panama north of the Serranía de San Blas and the sweep of nearly four hundred tropical islands that is the Guna Yala Archipelago (often referred to as San Blas or Kuna Yala). Only about forty of the minute islands are inhabited; some strain to contain towns, while others are little more than sandbanks that a lone family has made their home. The administrative capital, El Porvenir, lies on a small, narrow island off the tip of the peninsula at the far western end of the comarca.

Changes in recent years, including a direct road from Panama City and mobile phone reception for many of the islands, have opened up travel in the region, while increasing pressure on the fragile environment and on traditional cultural values.

The Guna gradually made their way here over the centuries, migrating first from Colombia to the Darién region sometime in the sixteenth century. Abandoning that area after years of struggles with the Spanish and the Emberá tribe, they settled afresh along the coast and on the islands in the nineteenth century, but it took what they call “the Tule Revolution” in 1925 to have the territory recognized as theirs alone. To this day, no non-Guna may live in the comarca; it’s a privilege just to enter it and an even greater one to hop among the islands, soaking up their beauty, and to spend the night in the community, perhaps sleeping in the same room as a Guna family. Learning a little about their cultural heritage and observing the fascinating ins and outs of island life are excellent reasons to come here – even if you can’t stand idyllic beaches.

You’re most likely to base yourself on one of the tiny uninhabited islands in western Guna Yala – all of which are palm-topped and encircled by thin white-sand beaches. Accommodation options on each one offer day-trips, usually for a fee, to other picturesque, uninhabited islands. Good bets include the tiny Isla Perro (Achutupo – Dog Island); a cargo ship was wrecked in the shallows here in the 1940s, making for great snorkelling. Snorkels can be rented on the beach. Isla de las Estrellas, its shallows dotted with its namesake starfish – is also popular.

The Cayos Holandéses, however, are generally considered to offer the most spectacular underwater scenery. Protected by an outer reef, they offer natural swimming pools showcasing an array of sponges and corals that attract rays, reef sharks and a plethora of rainbow-coloured fish. At the outer limit of the comarca, 30km from shore, they are inaccessible when the seas are rough (especially Dec–Feb) and the extra fuel needed to reach here means a day-trip here usually carries a hefty supplement.

Other excursions are sometimes made to an inhabited island, or to the mainland to visit a Guna cemetery or to go for a walk through the rainforest to a waterfall.

All of the islands are privately “owned” by the Guna, and when your hotel drops you off for an afternoon of sun-drenched laziness you will be approached for your payment of a visitor tax, usually US$2–5 – check with your guide beforehand, as it may be included in the price of the trip. When going on an excursion, be sure to bring water and something to do, whether it’s a book, a pack of cards or snorkelling gear (though some islands do have snorkelling gear for rent).

Guna society is regulated by a system of highly participative democracy: every community has a casa de congreso where the onmakket, or congress, meets regularly. Each community also elects a sahila, usually a respected elder, who attends the Guna General Congress twice a year. The General Congress is the supreme political authority in Guna Yala, and in turn appoints three caciques to represent the Guna in the national government.

Colonial missionaries struggled in vain to Christianize the Guna, who cling to their own religious beliefs, based above all on the sanctity of Nan Dummad, the Great Mother, and on respect for the environment they inhabit. Though Guna men wear standard Western clothes, Guna women wear gold rings in their ears and noses and blue vertical lines painted on their foreheads; they don headscarves and bright bolts of trade cloth round their waists, their forearms and calves are bound in coloured beads and their blouses are sewn with beautiful reverse-appliqué designs known as molas.

Given that no non-Guna is permitted to own property on the islands and that tourism is a prickly issue, your status as an outsider is symbolic and your behaviour will probably be scrutinized. Cover up on the inhabited islands and cut out public displays of affection. You must ask permission from the saila (chief) to visit inhabited islands in the less touristy central and eastern islands of the comarca – ask the advice of people you meet to find a contact – and to take photographs, which are banned on some islands, as is alcohol.

In 2011 the general congress passed a law to standardize the Guna alphabet, removing the letters “p”, “t”and “k”. From that point on the area previously known as Kuna Yala was now called Guna Yala. 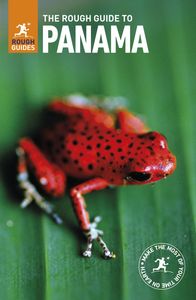