Travel Tips Myanmar (Burma) for planning and on the go

Very few foreign tourists are victims of crime in Myanmar, possibly because the penalties for stealing from tourists are severe. There are, however, occasional reports of opportunistic theft such as of cameras left charging on ferries while the owners wander the decks.

Although the government is engaged in conflict with ethnic resistance groups in several parts of the country, if there’s any danger in an area then it will be closed to foreigners both for their protection and to keep the violence hidden away from international attention. No resistance groups have been known to target tourists.

Although the quasi-civilian government inaugurated in 2011 has taken steps to reduce censorship and released some political prisoners, Myanmar is still far from being a place where freedom of speech can be taken for granted and violence is still regularly used against dissenters and protesters. It is still therefore wise to avoid raising political topics in conversation, as local people can be nervous about finding themselves in trouble; let them take the lead, and be discreet. Also think twice before taking photographs of bridges, police stations and anywhere else where doing so might be considered a security risk.

The quality of health care in Myanmar is generally poor. Routine advice and treatment are available in Yangon and Mandalay but elsewhere the hospitals often lack basic supplies, and some suffer under corrupt administrations. Avoid surgery and dental work, as hygiene standards cannot be relied upon; if you are seriously ill then contact your embassy for advice, and expect international-quality care to be expensive (and possibly to require payment up front). As always, it is important to travel with insurance covering medical care, including emergency evacuation.

Minor injuries and ailments can be dealt with by pharmacists, particularly in major tourist areas where they are more likely to speak English. Pharmacists offer many things over the counter without prescription, although there are serious issues with fake and out-of-date medication.

There are now internet cafés in most towns and cities, almost all with printers and some offering services such as Skype; in addition, some hotels and guesthouses have wi-fi access. Connections are unreliable and can be frustratingly slow; unsurprisingly, high-end hotels tend to be the best bet and it’s normally possible to use the wi-fi if you buy something in their café. Since 2010, censorship of the web has been much less severe and most popular web-based mail can be accessed. Avoid accessing a PayPal account from Myanmar, as it may be blocked.

The best sources of information, besides other travellers and some online resources, are generally the staff at guesthouses. Some of the best of these places are well used to meeting the needs of visitors, providing maps and advice on how to explore the area. The state tourist offices, operated by Myanmar Travels & Tours (MTT), are generally not especially helpful, although you will need to visit one if you want to apply for a permit to travel to a restricted area. They also give out free copies of maps published by Design Printing Services (dpsmap.com), including a detailed one of Bagan and one covering several major cities. Outside of Myanmar, you can buy a number of maps of the country, including the Reise Know How 1:1,500,000 and Globetrotter 1:1,700,000 (the latter also includes some city maps).

The postal service in Myanmar is not known for its efficiency; sending postcards is cheap but they often do not reach their destinations. Post offices are typically open Monday to Friday 9.30am to 4.30pm and sometimes on Saturday mornings, and many have an EMS (Express Mail Service) counter offering faster and more reliable international delivery.

Myanmar’s currency is the kyat (pronounced “chat”), usually abbreviated as K, Ks or MMK. Notes are available in denominations of K1, K5, K10, K20, K50, K100, K200, K500, K1000, K5000 and K10,000, although the lowest value you are likely to encounter is the K50 note. At the time of writing the exchange rate was K860 to $1, K1300 to £1, and K1120 to €1; high-value notes (particularly $100 bills) attract the best exchange rates, so bring those to change. Although at one time the official rate was artificially low and most people changed money on the black market, today banks offer a realistic rate and it is not worth using the black market. It is never a good idea to change money in the street, even if the rate sounds good, as scams are common. Note also that kyat cannot be bought or sold overseas, so you should change any leftover currency before leaving the country.

Kyat are used to pay for food, bus tickets, taxi journeys and items in ordinary shops or markets, but US dollars (and possibly euros, although don’t rely on it) must be used for government services including train tickets and entry fees for major tourist attractions. There are also some circumstances in which US dollars are preferred but not required, notably at hotels and guesthouses but also in some tourist-oriented shops. In these cases, prices are quoted in dollars and if payment is made in kyat then it is usually at a poorer rate than you’d get in a bank. It’s a good idea to bring plenty of low-denomination dollar notes for these situations. Note that it is essential that any currency which you intend to change within Myanmar is pristine, and that US dollars were issued in 2006 or later. Notes that are creased, torn or marked in any way – however minor – may not be accepted by banks, hotels or any other outlets; if they do take them then it is likely to be at a reduced rate. Reject US dollar change unless it is in perfect condition.

For many years, up until late 2012, Myanmar had a cash-only economy as far as tourists were concerned: it was impossible to withdraw money from ATMs within the country, travellers’ cheques were not accepted, money transfer services such as Western Union were unavailable, and only a handful of top-end hotels accepted credit cards. The only option therefore was to bring a stack of cash and exchange it for kyat as necessary. With a relaxing of international sanctions, however, at the end of 2012 some ATMs (mostly in Yangon and Mandalay) started to accept overseas debit and credit cards. It looks like this trend will continue and other changes may be on the way, but you should check on the current situation before travelling. At the time of writing it was still impossible to recommend arriving in Myanmar without enough cash – in euros, Singapore dollars or (preferably) US dollars – to cover your entire trip. The availability of money via ATM was simply too unreliable, particularly outside of the major cities. In addition, at the time of writing, only kyat were available from ATMs.

Standard business hours are Monday to Friday 9am to 5pm, with shops staying open a little later (and normally opening on Saturdays). Post office opening times vary but are generally Monday to Friday 9.30am to 4.30pm, with some opening on Saturday mornings. Banks typically open Monday to Friday 9am to 3pm, although some close earlier. Museums operated by the government are open from Wednesday to Sunday 10am to 4pm. Some major pagodas are open 24 hours a day, while others tend to open from early morning until late in the evening. Restaurants are typically open daily from around 9am to 9pm, while many teahouses open much earlier for breakfast, and places aimed at tourists might stay open until 10pm.

Several holidays are based upon the lunar calendar and therefore change date each year.

Many guesthouses will let you make local calls from reception (check the price first), or may make the call for you if you’re trying to book accommodation for later in your trip. There are also local call stands – often just a table with a telephone – in the streets and in some shops. The cheapest and easiest way to call internationally is through a VOIP (Voice Over Internet Protocol) service such as Skype. Otherwise you might need to use public call centres (try asking at the post office), although they are very expensive.

Mobile phone numbers start with 09. International roaming is in its infancy in Myanmar and not widely available, but foreigners can buy a SIM card from mobile phone shops and supermarkets, which lasts 28 days and is issued by the government body MPT (Myanmar Post and Telecommunication). The card costs around K20,000 (it varies from shop to shop) and includes $20 credit. It cannot be topped up; once you run out of credit the only option is to buy a new card, with a new phone number.

All foreign nationals require a visa in order to visit Myanmar. Although a visa-on-arrival system does exist, it applies only to business visitors or conference guests who are able to provide documents such as letters of invitation.

You will therefore need to obtain a tourist visa from a Myanmar embassy or consulate before you travel to the country, as you will not be able to get one at the border. In order to apply, your passport must be valid for at least six months from your proposed date of arrival. Tourist visas typically last for 28 days from the date of entry, which must be within three months of issue, and cost around $20–30. Some embassies, such as the one in Bangkok, offer same-day service for an additional cost.

Tourist visas cannot be extended, but it is possible to overstay them. A fee of $3 per day of overstay (plus, sometimes, an additional $3 for “administration”) will be collected on departure at the airport, before you are stamped out of the country. Visitors have reported overstaying by three weeks or more without officials at the airport raising any objections. The only possible hitch is that guesthouses occasionally express concern with expired visas, although it is rare to hear of accommodation actually refusing to allow people to stay.

wburmalibrary.org A huge collection of text from books and articles about Myanmar, plus relevant links, organized into categories.

w irrawaddy.org One of the most reliable sources of up-to-the-minute news on the country.

w myanmartourism.org For all its faults, the website of the Ministry for Hotels & Tourism has some useful information such as hotel and tour company telephone numbers, plus a list of places that are off-limits or require permits (although this may be out of date). 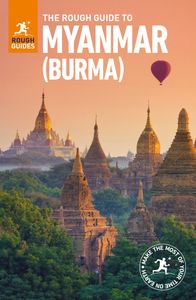