The influx of foreign visitors has meant a rapid increase in hotels and improved standards in tourist centres, although out in the boondocks change comes more slowly and comfort can be harder to come by. Expect to find higher standards of accommodation, as well as the greatest variety, in larger towns. Provincial towns, with the exception of popular stopovers on backpacker routes, tend to lag far behind, with small towns on well-travelled highways offering at best one or two rather rustic guesthouses.

Outside Luang Prabang, Pakse, Vang Vieng and the capital, finding a place to stay is a far simpler process than in most Southeast Asian countries – often because there are only one or two places in town and they’re just a short walk from one another. Few towns have touts or taxi drivers trying to influence your decision.

Once you’ve found a spot, ask to see a number of rooms before reaching a decision, as standards and room types can vary widely within the same establishment. En-suite showers and flush toilets are increasingly available in budget accommodation, though squat toilets are still common at the very cheapest places.

Establishments that do not quote their prices in dollars or baht keep a close eye on the volatile exchange rate and change their prices frequently, keeping the room rate at roughly the same dollar value. Many establishments will allow you to pay in Lao kip, US dollars or Thai baht, regardless of which currency their rates are quoted in; exchange rates are generally fairly close to the official rate. Count on being able to use credit cards only at higher-end establishments in cities.

Prices for the most basic double room start at around 30,000–40,000K in the provinces and 40,000–70,000K in Vientiane and Luang Prabang. Dorm beds (only usually found in the main tourist areas) can be had for as little as 25,000K per night. At these prices rooms can be pretty shabby, although there are a few diamonds in the rough.

For 100,000–200,000K you can buy yourself considerably more comfort, whether it’s the luxuries of a standard hotel or the cosiness and hospitality of an upmarket guesthouse with a garden, tucked away in a quiet side street. If you’re willing and able to spend around $25, you can actually get something quite luxurious, with wi-fi and a flat-screen TV.

Moving further up the scale, a whole host of expensive hotels has appeared on the scene, and with many of them struggling to fill rooms, managers can be amenable to discounts, especially in low season. Before settling on a price at mid-range and high-end hotels, check whether service charge and tax are included in the quoted price.

Most places are open to negotiation, especially in the low season, so it’s a good idea to try and bargain; your case will be helped if you are staying for several days.

Not all accommodation places have phones, which is why some listings in this Guide don’t have numbers alongside. Online booking services include wwww.laos-hotels.com and wwww.laos-hotel-link.com.

The distinction between a guesthouse and a budget hotel is rather blurry in Laos. Either can denote anything ranging from a bamboo-and-thatch hut to a multistorey concrete monstrosity. There’s very little that’s standard from place to place – even rooms within one establishment can vary widely – although in tourist centres the cheapest bet is generally a fan room with shared washing facilities. As you tack on extra dollars, you’ll gain the luxury of a private bathroom with a hot-water shower and an air conditioner. In small towns in remote areas you’ll find that the facilities are often rustic at best – squat toilets and a large jar of water with a plastic scoop with which to shower, though this is rapidly changing. The further off the beaten track you go the greater the chances are that you’ll be pumping your own water from a well or bathing in a stream.

Mid-range hotels have been opening up in medium-sized towns all over Laos over the last few years, greatly improving the accommodation situation. Most of these hotels are compact, of up to five storeys, and offer spacious rooms with tiled floors and en-suite bathrooms with Western-style toilets for between 100,000–200,000K. The mattresses are usually hard – but at least the sheets and quilts are consistently clean. The bathroom fittings in such hotels are usually brand new but a few don’t have water heaters. Because the standard of construction is poor and there is no concept of maintaining buildings, such hotels tend to age quickly.

Once you’ve crossed the $25 threshold, you enter a whole new level of comfort. In the former French towns on the Mekong this level of expense translates into an atmospheric room in a restored colonial villa or accommodation in a recently built establishment where rooms boast some of the trappings of a high-end hotel, such as cable television, fridge, air conditioning and a hot-water shower.

Colonial-era hotels often have a limited number of rooms, so book ahead if you want to take advantage of them – well in advance if you plan to visit during the peak months (Dec & Jan). Many of these places are firmly ensconced on the tour-group circuit, so push for a discount if you’re travelling independently.

Thanks to foreign investors, a raft of top-end hotels have opened their doors in Vientiane and Luang Prabang, charging upwards of $80 a night. The best hotels in the capital, such as the Settha Palace Hotel and the Novotel Belvedere, have international-class facilities, including business centres and gyms. At the moment, there’s a glut of high-end hotel accommodation in the capital, so don’t hesitate to ask for discounts, especially for longer-term stays.

Should you find yourself stuck in a small town for the night, a victim of the tired machinery of Laos’s infrastructure or the yawning distances between villages, villagers are usually kind enough to find space for you in the absence of a local guesthouse. Don’t expect much in the way of luxuries: you’ll most likely find yourself bathing at the local well or in the river and going to the bathroom under the stars. Many small towns don’t have so much as a noodle shop, so you’ll also need to prepare yourself for some very authentic cooking. Before leaving, you should offer to remunerate your host with a sum of cash equivalent to what you would have paid in a budget guesthouse.

If there’s a local police station, you should make yourself known to them, otherwise ask for permission to stay from the village headman; the government doesn’t encourage foreigners to spend the night at a villager’s house.

The Rough Guide to Laos and related travel guides

We had a terrific time in Vietnam thanks to our guide, Sunny. He had everything taken care of, had wonderful surprises planned, and kept us entertained. He ...

The Rough Guide to Laos 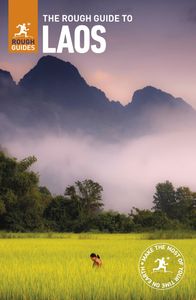 Your travel guide to Laos

Ready to travel and discover Laos?
Get support from our local experts for
stress-free planning & worry-free travels