You rarely think of deserts in Kenya, but the North – more than half the country – is an arid zone, most of it cinder-dry for ten months of the year. The old “Northern Frontier District” remains one of the most exciting and adventurous parts of Africa: a vast tract of territory, crisscrossed by ancient migration routes, and still tramped by nomadic Samburu, Boran, Rendille, Gabbra, Turkana and Somali herders. Unfortunately, it also has a dangerous reputation, with livestock-rustling and tribal feuding widespread, while banditry, and the spillover from Somalia’s civil conflict, make it too risky to visit northeastern Kenya – the whole area east of the Isiolo–Marsabit–Moyale road. By contrast, the vast territories to the north and west of Mount Kenya, including Lake Turkana and the beautiful Laikipia region, are safe – if still adventurous – areas to visit.

Great places to visit in this region of Kenya

The most obvious attraction in northern Kenya is the Laikipia plateau, a region of hilly savanna, northwest of Mount Kenya. Second in wildlife density only to the Maasai Mara, Laikipia boasts more endangered species than anywhere else in the country (including Kenya’s biggest population of black rhinos) alongside some very successful examples of mixed ranching and conservation, and some very upmarket boutique lodges and camps.

While Laikipia is increasingly popular for high-end fly-in safaris, the classic travel target in the far north is the wonderful jade splash of Lake Turkana. The lake’s islands, prehistoric sites and, over the past decade or so, the Lake Turkana Festival, are major attractions to add to the strong appeal of the adventurous journey to the lakeshore.

Although Moyale is little more than Kenya’s border town with Ethiopia, the remote road north to the frontier runs past fascinating Marsabit National Park, with its misty, highland forests rising above the desert. Looking east, not many people take the long road to Garissa or use this route to reach the coast, but as long as the Tana River route remains relatively safe, it’s a recommended alternative to joining the heavy traffic on the Mombasa highway.

In terms of climate, although the landscape is parched for most of the year, when the rains do come (usually around May) they can have a dramatic effect, bringing torrents of water along the ravines and luggas (watercourses) and tearing away bridges and concrete fords with a violence that has to be seen to be believed. Flood waters often sweep over the plains to leave an ooze of mud and, within twenty-four hours, new shoots. In these conditions, you can easily get stranded. However, if your plans are flexible, being up north during the rains is an exciting time to explore.

Northwest of Mount Kenya, Laikipia District is a vast plateau of more than 9000 square kilometres encompassing much of the transitional land between the well-watered central highlands to the south and the semi-desert grazing steppe of the Samburu in the north. On the face of it, the region is not an obvious destination and the few roads that cross it are mostly poor and sometimes impassable in the rains. In addition, it straddles the increasingly blurred divisions between Samburu and Kalenjin pastoralists and Kikuyu agriculturalists, which has led periodically to ethnic violence. The area also remains the focus of a century-old land dispute between the Laikipiak Maasai and white ranchers.

At the same time, while competition with wildlife has increased, there is now widespread cooperation between local people and ranchers, resulting in some of Kenya’s most encouraging conservation success stories and making Laikipia one of the best regions in Kenya to see wildlife. There are no national parks or reserves here – all the conservation initiatives are undertaken privately or in the voluntary sector – and yet community land is managed in ways that respect traditional lifestyles while meeting the needs of wildlife and producing revenues from tourism. As tourist numbers grow, indigenously owned group ranches are also beginning to work independently to achieve the same ends.

The market town of Nanyuki is the main supply hub for Laikipia’s remote residents, offering everything from groceries and fuel to pharmacies and a few good restaurants

A great chunk of land in central Laikipia, on the east side of the Ewaso Nyiro, is now managed as the Naibunga Conservancy, covering more than 170 square kilometres and comprising swathes of conservation land ceded by eight community-owned group ranches in the area: Il Motiok, Kijabe, Koija, Kuri-Kuri, Morupusi, Nkiloriti, Tiemamut and Il Polei. There is, as yet, a limited range of places to stay, though several of the group ranches are encouraging wild camping with guides.

Privately owned ranches northwest of Nanyuki include El Karama, Ol Jogi and Mpala. El Karama, a settler ranch since the early 1960s, covers nearly sixty square kilometres and as well as being a working ranch with a herd of unusual Sahiwal cattle also provides a home for Grevy’s zebra, plenty of elephants, reticulated giraffe, leopards, at least one pride of lions and – occasionally – wild dogs, among many other species.

Mpala Ranch and Conservancy, owned by the American Mpala Wildlife Foundation, ranges across two hundred square kilometres and incorporates a state-of-the-art wildlife and environmental research centre. However, there is no accommodation on the ranch for tourist visitors.

Ol Jogi is a 270-square-kilometre ranch owned by the art-dealing and horse-racing Wildenstein family, where KWS staff and US government vets are engaged in a long-term project to extract gerenuk semen for captive breeding.

An interesting community activity at Twala Cultural Village, near Il Polei, is Walking with Baboons, a chance for visitors to overturn some of the popular myths and prejudices that our species holds for this less cultured, but no less social, primate. In the early morning or at dusk you go out with a guide trained by the Uaso Ngiro Baboon Project to observe a habituated troop at close quarters on their rocky sleeping ledges. You’ll learn about the importance of avoiding eye contact and the subtlety of baboon family and social life. It’s a fascinating and highly recommended experience, and the money goes to support local community projects.

In the far southeast of Laikipia lies the former cattle ranch of Lewa Downs, one of the earliest ranches to convert to wildlife conservation and now largely incorporated into the Lewa Wildlife Conservancy. A little to the north of Lewa – and in much wilder country – are the locally owned group ranches of Il Ngwesi and Lekurruki, while bordering Lewa to the west is an exemplary game-and-cattle ranch, Borana.

The ranches to the west of the Ewaso Nyiro are the most remote of the Laikipia range lands and include large tracts of country that are still not open to the public or easily visited, including some very big private and corporate landholdings such as author Kuki Gallman’s Ol Ari Nyiro Laikipia Wildlife Conservancy.

Laikipia is increasingly recognized as one of the jewels in Kenya’s safari crown. The district contains a wealth of endangered species, including black rhinos, whose world population is between three thousand and four thousand, a few hundred of them in Kenya. Of those, half are in Laikipia. As browsers rather than grazers, black rhinos don’t interfere with cattle pasture, and do well in the same environment so long as the bush isn’t cleared. Apart from the rhinos, more than two thousand elephants still undertake a seasonal migration during the long rains from Laikipia northwards into the Samburu rangelands. The district also supports an estimated 25 percent of the world’s remaining population of Grevy’s zebra, a species fast disappearing in its other habitats in Ethiopia. There are also several elusive packs of African wild dogs.

In Laikipia, wildlife tends to be more closely managed than in the national parks. Some rhinos, for example, are individually monitored by assigned rangers, while African wild dog packs are fitted with VHF (very high frequency) collars and their movements tracked using GPS. The solutions may seem unnatural, but they’re working. For further information, check out the excellent website of the Laikipia Wildlife Forum, the body that coordinates the region’s various interest groups and visitor facilities.

We experienced a great 9 days adventure in Rwanda and Tanzania which was very well organized by Inge. Hotels, lodges, food were just perfect. A special tha ... 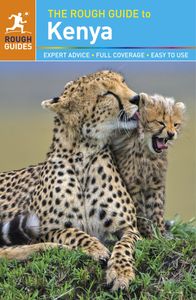