Eating and drinking in Ireland

Few visitors come to Ireland just for the food (though plenty come to drink). However the quality and choice on offer have improved markedly in the last twenty years. A new generation of small-scale artisan producers has emerged, be they cheese-makers, organic farmers, fish-smokers or bakers, and the best Irish chefs seek out this local produce to recreate and adapt traditional dishes. It’s well worth looking out for Good Food Ireland signs (or checking out wwww.goodfoodireland.ie), a network of high-quality restaurants, cafés, hotels, producers and cookery schools, who are committed to using local, seasonal, artisan ingredients wherever possible.

The widest array of restaurants is concentrated in the big cities – where, alongside Dublin and Belfast, Cork has a particularly vibrant scene – and in gourmet hotspots such as Kinsale, Kenmare and Kilkenny, but good places can be found all over the country, sometimes in quite unexpected locales.

Book tickets and tours in Dublin and things to do in Kilkenny.

Off the beaten track, it’s usually worth phoning ahead, as opening hours can be erratic and, in winter, some establishments in tourist areas close down entirely. There’s no getting away from the fact that dining out in Ireland is expensive, particularly when you factor in the high price of wine, but many fine restaurants offer cheaper, simpler menus at lunchtime, and plenty also lay on good-value early-bird menus in the evening – two or three courses for a set price, usually available until 7 or 7.30pm, though often not at weekends. Found in small towns across the country, though sometimes takeaway only, the most widespread ethnic restaurants are Chinese, Indian and Italian, followed by Thai; reflecting recent immigration patterns, you’ll find Eastern European delis in many large towns and restaurants occasionally.

Most pubs across the country will be able to rustle you up a simple sandwich or toastie and a cup of tea or coffee, and many offer a substantial lunch. This is often based around a carvery, serving slices of roast meat, potatoes and veg, as well as sandwiches and salads – which regularly feature crab and other seafood in coastal areas – and hot staples such as Irish stew and soups. An increasing number of Irish pubs now also serve meals in the evening. Similar fare is also available in traditional daytime cafés, alongside cakes and scones, which are now augmented in some towns by deli-cafés, offering a more interesting array of food.

If you fancy trying your hand at preparing a few dishes yourself, head for one of the country’s many food markets – virtually every sizeable town now hosts a farmers’ market, usually on a Saturday. The best markets – colourful, vibrant affairs that are worth a visit in their own right – are the permanent English Market in Cork city; the Temple Bar Food Market in Dublin, the Galway city market and the Midleton market in east Cork, all on Saturdays; and St George’s Market in Belfast, on Fridays and Saturdays.

Book tickets and tours in Cork

Big breakfasts are an Irish tradition and are generally available at old-style cafés, often all day long; however, visitors are most likely to come across them at their hotel or B&B, where they’re invariably included in the price. The “full Irish” or “Ulster fry” typically consists of bacon, sausage, eggs and tomatoes, sometimes stretching to mushrooms, black pudding and white pudding, though many hotels and B&Bs now offer less heart-stopping alternatives such as smoked salmon and fruit salad. 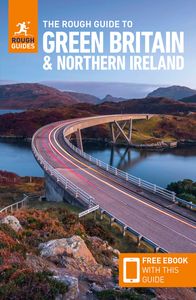