How to get to Germany

The quickest and easiest way to reach Germany from outside continental Europe is by air. While the national carrier is Lufthansa, dozens of other major airlines fly to Germany too. The wide spread of airports throughout the country – many served by budget airlines – means air is also the cheapest method of arrival. However, a location at the heart of continental Europe opens up the possibility of road and rail travel, both more ecofriendly options and, at least in the case of road travel, one that may be cheaper than flying in and renting a car for an extended trip.

The principal hub for international long-haul flights is Frankfurt – whose airport has its own major train station for onward connections – followed by Munich and Düsseldorf. Prices vary considerably by season, with the highest being around June to August. Fares drop during “shoulder” seasons – September, October, April and May – and you’ll get the best prices during the low season: November to March, excluding Christmas and New Year when prices are hiked up. As ever, early bookers snatch the best deals. Note too, that midweek prices are the cheapest.

Most points of arrival are well linked to the city centre via a cheap and efficient public transport system. If you plan to use public transport throughout a city stay, then multi-day tickets that cover your journey from the airport are available, the only exceptions being the remote airports used by budget airlines, although even these are always linked to a major destination by bus services.

Numerous airlines fly daily to destinations throughout Germany from UK and Irish airports. The two major players are British Airways and Lufthansa, though budget flights by the likes of Ryanair, easyJet, Air Berlin and Germanwings have significantly expanded the route network. Low-cost operators have also slashed the price of getting to the country. While a published single from the UK with the major carriers can be around £300, you can usually pick up similar flights with the budget carriers for around £50, or from as little as £20 if you book a couple of months in advance. Competition and tight margins mean that flight routes are particularly vulnerable to change, which makes search engines such as wskyscanner.net, wkayak.co.uk or wmomondo.com invaluable for researching the best connections and prices.

Thanks to competition between carriers, prices have reduced from the US and Canada in recent years. Most major North American gateways have direct flights and many others offer convenient connecting flights. Lufthansa has the most extensive network, but other major carriers include Continental, Delta, Singapore Airways and United. Meanwhile budget carriers such as Air India, Air Berlin, and Condor tend to concentrate on direct services to smaller regional airports; the latter two only operate in summer.

Most transatlantic flights are bound for Frankfurt, with a handful to Munich and Düsseldorf. However, domestic connections are cheap and plentiful, by air or train.

East-coast flights are marginally cheaper than those from the west coast. As an idea of prices, the lowest discounted scheduled return flight to Frankfurt you’re likely to find in low/high season, flying midweek, is US$450/600 from New York, US$550/850 from Chicago and US$650/1000 from Los Angeles.

There are fewer direct-flight options from Canada. The widest selection of flights, operated by Air Canada, Air Transat, LTU and Lufthansa, are out of Toronto, followed by Vancouver and a handful of flights from Ottawa and Calgary. Again, Frankfurt is the premier destination, then Munich. You are unlikely to make major savings by flying to the US first: low/high season fares to Frankfurt from Toronto are Can$700/1000; from Vancouver expect to pay from Can$900/1500.

Nearly all “direct” flights from Australia take around 22 hours to travel from Sydney, Melbourne or Perth to Frankfurt, via Singapore. Qantas, British Airways and Singapore Airlines command the bulk of flights, with other carriers providing routes that require a transit and change of planes in the operators’ hub city – usually in Asia or the Middle East – before continuing to Germany, though these cheaper fares can bump up journey times by a good ten hours – reputable agents such as STA come into their own here. Other stopover possibilities include the US and Canada, though North American routes tend to be more expensive.

The lowest prices from Sydney or Melbourne to Frankfurt in (European) high/low season are A$2100/1300, with those from Perth generally around A$200 cheaper, and those from Adelaide more expensive by the same margin. From New Zealand, low-season scheduled fares from Auckland start at around NZ$2300 and rise to NZ$2500 and up in high season. Again Qantas, British Airways and Singapore Airlines are the big three, with most flights stopping at Singapore. Consequently round-the-world tickets often offer good-value fares compared with a standard return, not to mention a chance to break up the journey for some travel en route. For roughly the price of a long-haul return, you can buy multi-stopover or round-the-world tickets. A good agent such as STA is able to devise a travel plan pieced together from various airlines, with Germany just one destination on a ticket that is generally valid for a year. Prices for the basic Australia–Asia–Europe–US–Australia itinerary start from as little as A$1300. It’s also possible to route overland segments into the journey.

The high-speed rail links of Eurostar (eurostar.com) run from St Pancras International, London, to Germany rail gateways Aachen and Cologne in around six hours, or seven hours for Frankfurt. Passengers must change at Brussels (1hr 50min from London) to join French-run Thalys or InterCity Express (ICE) express trains to Germany. Like air travel, prices vary according to the season, day and time, class of travel and also how far in advance tickets are booked. However train travel is rarely cheaper than flying, especially if you start from outside London and want to travel far beyond Cologne. The environmental benefits of train travel are nevertheless huge, especially since Eurostar services are now carbon neutral. Sleeper carriages (Schlafwagen) also appeal for overnight journeys, permitting the romance of waking up at your destination and saving on a hotel overnight.

London–Cologne returns start at around £100; but can easily rise above £300 for a standard-class return. Long-distance train advice website seat61.com is invaluable for planning. When arriving by train, you’ll find that the Hauptbahnhof (main train station) of almost every city is an easy walk from the centre, and generally preceded by a string of outlying stations which might be more convenient for your accommodation.

If you plan to use the train extensively, look into rail passes. Since, with some planning, travel by train within Germany can be very good value, it’s worth doing the sums via the website (bahn.com) of national operator Deutsche Bahn to ensure a pass that gets you to Germany from abroad as well as provides travel within the country, is cheaper than an international flight to Germany plus a national rail pass. Where the Eurail Pass scores is on a transcontinental trip – available to those living outside of Europe, it comes in a variety of forms: the Global Pass (from US$518) permits unlimited travel within twenty-two countries from fifteen days to three months; the Select Pass (from US$327) allows three to fifteen days’ travel within a two-month period; the Regional Pass (from US$186) provides four to ten days’ travel within two countries; a One Country Pass, valid for three to ten days (from US$51). Under-26s are eligible for “Youth” passes, which are cheaper by about a third and only valid for second-class seats. Group passes are also available.

An alternative is the time-honoured InterRail pass – available to residents of a European country. Again, the pass comes in formats that are either valid continuously or only for specified days within a set period. Prices start at €259 for five days’ second-class travel within a ten-day period and rise to €619 for a month’s continuous travel. First-class passes cost around half as much again, while under-26s pay a third less and all passes require supplement payments for high-speed trains and couchettes.

Compared with low-cost airlines, travelling to Germany by bus is not particularly cheap and will involve a long and uncomfortable journey. The only real advantages are the smaller carbon footprint; the chance to buy an open return at no extra cost; and that passes to roam around Germany are a good bit cheaper than the rail equivalents. Services to all major cities in Germany are run by Eurolines from Victoria Coach Station in London, and are bookable through most travel agents and through any National Express agent. As an idea of times and advance prices, London–Cologne takes thirteen hours and costs around £60 one way, London–Berlin twenty hours and £80. Eurolines Passes, priced by season, cost £205–345 for 15 days’ travel and £310–455 for 30 days. Under-26 passes are £30–75 cheaper. You may be able to pick up a faster ride – and often a cheaper one – via the German Mitfahrzentralen car-share system.

Another option for a European tour is backpacker-friendly bus service Busabout, which operates a hop-on, hop-off network of routes throughout the continent. Berlin, Dresden, Munich and Stuttgart are on the North Loop of its three designated circuits – it intersects with the South Loop into Italy and West Loop to the French Riviera and Spain. A one-loop pass costs £379. The Flexitrip Pass, £329, allows more freedom, with six stops anywhere on the network and additional “flexistops” available at extra cost. All passes are valid for a season that lasts from May to October.

There are no longer any direct ferry services from the UK to Germany, but various services travel to France, Belgium or the Netherlands (see Car and motorbike). Year-round sea links to the German Baltic coast also exist from Scandinavia, notably Sweden and Denmark, and Baltic nations such as Lithuania.

To enter Germany by car from the UK you have to slice through continental Europe via France, Belgium or the Netherlands; which one depends largely upon your start point and final destination. You might travel to France (Calais, Dunkerque or Le Havre) or Belgium (Zeebrugge) for the Ruhrgebiet and east and south Germany; the Netherlands (Amsterdam, Hoek van Holland or Rotterdam) for north Germany. Wherever you enter, you’ll be on toll-free motorways all the way into Germany. As a guide of driving times from Calais, allow eight hours to Hamburg (6hr from Hoek van Holland), six hours to Frankfurt, ten hours to Berlin and ten hours to Munich.

Departures across the Channel are roughly every hour by ferry from Dover to Calais and every two hours via the car-carrying Eurotunnel train from Folkestone. From the north or centre of England, longer routes across the North Sea are: Harwich to Hoek van Holland (Stena Line); Hull to Rotterdam and Zeebrugge (both P&O Ferries); and Newcastle to Amsterdam (DFDS). From Ireland, Cherbourg and Roscoff, in northwest France, are as close as it gets to Germany, both accessed from Dublin and Rosslare respectively and served by P&O Ferries. Fast it is not. 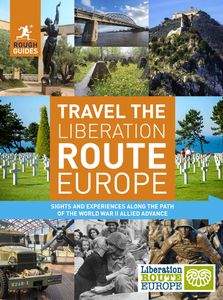