Isla Santa Cruz and around

The archipelago’s centre and tourist hub, SANTA CRUZ is a conical island of just under 1000 square kilometres, whose luxuriant southeastern slopes are cloaked each year in garúa drizzle. Reaching an altitude of 864m, the island supports all Galápagos vegetation zones, from cactus-strewn deserts around the coast, to tangled scalesia and miconia forests wreathed in cloud in the highlands, and sodden grassy pampas at the summit.

Great places to visit in this region of Ecuador

Santa Cruz’s central location and proximity to the airport on Baltra have helped make it the most heavily populated island in the Galápagos. The majority of the 27,000 or so islanders live in the archipelago’s largest town, Puerto Ayora, which is also the nerve centre of the conservation programme, headquarters of both the Charles Darwin Research Station and the Parque Nacional Galápagos. Home to more boats, tour brokers, hotels and restaurants than anywhere else in the islands, Puerto Ayora is also the best place for budget travellers to find last-minute places on cruises. There’s plenty to do in the meantime, such as visiting Bahía Tortuga, the Chato Tortoise Reserve or exploring the island’s several lava tunnels. Those itching to get to the wildlife can take day-trips by boat to the nearby islands in this central group, namely Santa Fé, Plaza Sur and Seymour Norte.

On the northwest side of Santa Cruz there are several worthwhile sites that can only be visited with guides by boat tours. Occasionally, day-trips sail there, but more commonly boats call at these spots having left the harbour at Baltra. A typical first stop is at Las Bachas, named for the barges the US abandoned on the beach here during World War II; their rusting skeletons still poke through the sand. It’s a popular place for swimming, but also makes a good introduction to wildlife, with marine iguanas, hermit crabs, black-necked stilts, great blue herons and turtle nests – you may see turtle tracks from November to February – and flamingos tiptoeing around the saltwater lagoon behind the smaller beach. To the west is Caleta Tortuga Negra, a cove where Pacific green turtles (despite the cove’s name) come to breed at the beginning of the warm-wet season. White-tipped reef sharks and rays can be spotted throughout the year, and the lagoon itself is fringed by mangroves, where herons and pelicans nest. On the northwestern tip of the island, the Cerro Dragón site consists of a gravel path winding up from flamingo lagoons to the top of the hill, passing land iguanas and their nests. Most have been repatriated since the extermination of feral dogs here in 1990. Heading further westwards, Bahía Conway (where in 1976 feral dogs attacked and killed a colony of five hundred land iguanas), and Bahía Ballena, a one-time whaling post, are seldom visited.

Puerto Ayora and around

Lying around the azure inlets of Academy Bay’s rocky shore, PUERTO AYORA, on the southern coast of Santa Cruz, was home to fewer than a couple of hundred people until the early 1970s. Now, laden with souvenir shops, travel agents, restaurants and hotels, the current denizens enjoy a higher standard of living than any other province in the republic, giving it a distinct aura of well-appreciated privilege. There’s a relaxed atmosphere to the place; tourists meander down the waterfront in the daytime, browsing through shops stuffed with blue-footed booby t-shirts and carvings of giant tortoises, while fishermen across the street in little Pelican Bay build boats and sort through their catches, watched by hungry pelicans. In the evenings, locals play five-a-side soccer and volleyball outside the Capitanía, and as it gets darker, the restaurant lights cast a modest glow over the bay and the bars fill with locals, tourists and research scientists, a genial mix that ensures Puerto Ayora has the best nightlife in the Galápagos.

The main thoroughfare, Avenida Charles Darwin, runs along the waterfront, from the municipal dock at its southern end to the Charles Darwin Research Station at its northern end, where visitors can see giant tortoise corrals and extensive exhibits on the natural history of the islands. Just about everything you’ll need is on Darwin: hotels, restaurants, the bank, travel agents, bars, discos, information, plus a number of less indispensable souvenir shops. The town’s other important road is Avenida Padre Julio Herrera (also called Avenida Baltra), running inland from Darwin and the dock to become the main road to the highlands and the link to the Baltra airport.

If you have some time in the port, there are several good local excursions that don’t require a guide. For some peace and quiet, you can’t do better than visit one of the local beaches, such as the glorious Bahía Tortuga, or the Playa de los Alemanes and the nearby swimming hole, Las Grietas, both reached by water taxi. A tour in a glass-bottomed boat will reveal the joys of underwater nature as far as possible for those who don’t want to snorkel, while the Santa Cruz highlands also hold a number of natural attractions, including lava tunnels, craters and a tortoise reserve, which can be visited on day tours through many local agencies.

The first record of human habitation in what is now Puerto Ayora is of a group of sailors, shipwrecked in 1905. They survived for three months by drinking sea-lion blood and chewing cactus pads, before discovering brackish water collecting in rock pools in Academy Bay, named after the California Academy of Sciences boat which – unbeknown to them – moored here only a few weeks earlier; they languished in the bay for a further three months until their rescue. Puerto Ayora itself was founded in the 1920s by a small group of Norwegians, lured to the Galápagos by ruthless promoters trading on the popularity of William Beebe’s 1924 book, Galápagos, World’s End, an account of his trip there with the New York Zoological Society. They promised the Norwegians – who gave away all their savings to go – a secret Eden where the “soil is so rich that 100,000 people could easily find homes”, noting that gold and diamonds were probably around too. Under an agreement with the Ecuadorian government they landed on Floreana, but within a few months of back-breaking work some had died and many more given up. In 1926, others went to Academy Bay and built houses, a fish cannery and a wharf, so founding the port. For a time, things went uncharacteristically well until the cannery blew up, killing two and injuring several others. To rub salt into the wound, the government seized their boat and all their remaining equipment, claiming the settlers had not built the harbours, roads and schools as laid out in their previous agreement. By 1929, only three Norwegians were left on Santa Cruz, but through superhuman determination, they built the foundations for the largest and richest city in the Galápagos.

Even though it is primarily a science and conservation facility, just about every tour of the islands sooner or later washes up at the Charles Darwin Research Station (CDRS), twenty minutes’ stroll from the town centre at the northern end of Avenida Charles Darwin. Past the information booth at the entrance, a path leads between some giant cacti to the Van Straelen interpretation centre, exhibiting information on geology, climate, conservation and many related aspects of Galápagos nature. A short video about the CDRS and the islands, introduced by a staff member, can be seen on request (daily 9am–noon & 2–4pm); details are available here about joining Galápagos conservation organizations. Past the visitor centre, you’ll come to the tortoise-rearing pens, where predator-proof enclosures hold batches of miniature giant tortoises divided by age; the creatures are best seen when the covers are off. Since 1965, a programme of tortoise repopulation has been ongoing, with eggs being carefully extracted from the wild and incubated here. After two or three years the hatchlings graduate to larger enclosures with the kind of terrain they might find in the wild; after four to six years they are deemed to have grown to an uneatable size (as far as predators are concerned) and repatriated to their home islands.

From the pens, a raised boardwalk weaves through the scrub past the tortoise corrals, where you can see fully grown giant tortoises. The most famous resident is Lonesome George (Solitario Jorge), the last surviving tortoise of the Pinta island subspecies, considered by many to be the rarest animal in the world. From 1906 until 1971 (when George was found) it was thought the Pinta tortoises were extinct; since then the search has been on to find him a Pinta partner, with a $10,000 reward on offer. At the moment, George is paired up with a couple of females from Volcán Wolf on Isabela, though – except for one fruitless liaison in 2008 – the unfortunate reptile has shown little interest in love. Recent research has suggested tortoises from Española – another subspecies from the opposite side of the archipelago – may in fact be George’s closest relatives, so he may get on better with them. Despite his 75 years or so (with about another 75 to go), he’s quite a shy animal, and the best time to see him is when he’s being fed, on Mondays, Wednesdays and Fridays at 9am.

At the end of the walkway is an enclosure with half a dozen friendly tortoises, mostly former pets donated to the station. This is the best place to get up close and take photos – but be careful not to touch them or walk on their feeding area. Near the exit, you’ll pass the CDRS kiosk, selling t-shirts, videos and souvenirs; this is the only place on the islands you can buy CDRS logo clothing, the proceeds of which go straight to the station. Near the exit you’ll see a sign for a little beach, a hidden spot for lazing about and looking across the bay.

Huge underground lava tubes perforate Santa Cruz, and in places extend for several kilometres, enclosed by high jagged walls that disappear into the gloom. The tubes were formed when cooler outer parts of lava flows hardened into thick rock walls, providing insulation to keep a flow going inside; eventually the flow subsided, leaving long empty tunnels easily big enough to walk down. As they’re on private land, you don’t need an official guide to explore these volcanic curiosities, though tours can be arranged in Puerto Ayora. The floors can be slippery and rubble strewn, so a flashlight and sturdy shoes are a good idea.

One of the easiest to get to is near Bellavista (follow the “los túneles” signs from the village), where you can hire a flashlight ($0.50) to explore a tunnel ($2) several hundred metres long. Another set, known as El Mirador, is within walking distance 2.5km from town ($1 by taxi). There are also the Salasaca tunnels ($3), 5km northwest of Santa Rosa on the farm of Señor Arias; get in contact with him through one of the agencies to arrange a visit.

The Rough Guide to Ecuador and related travel guides

The Rough Guide to Ecuador 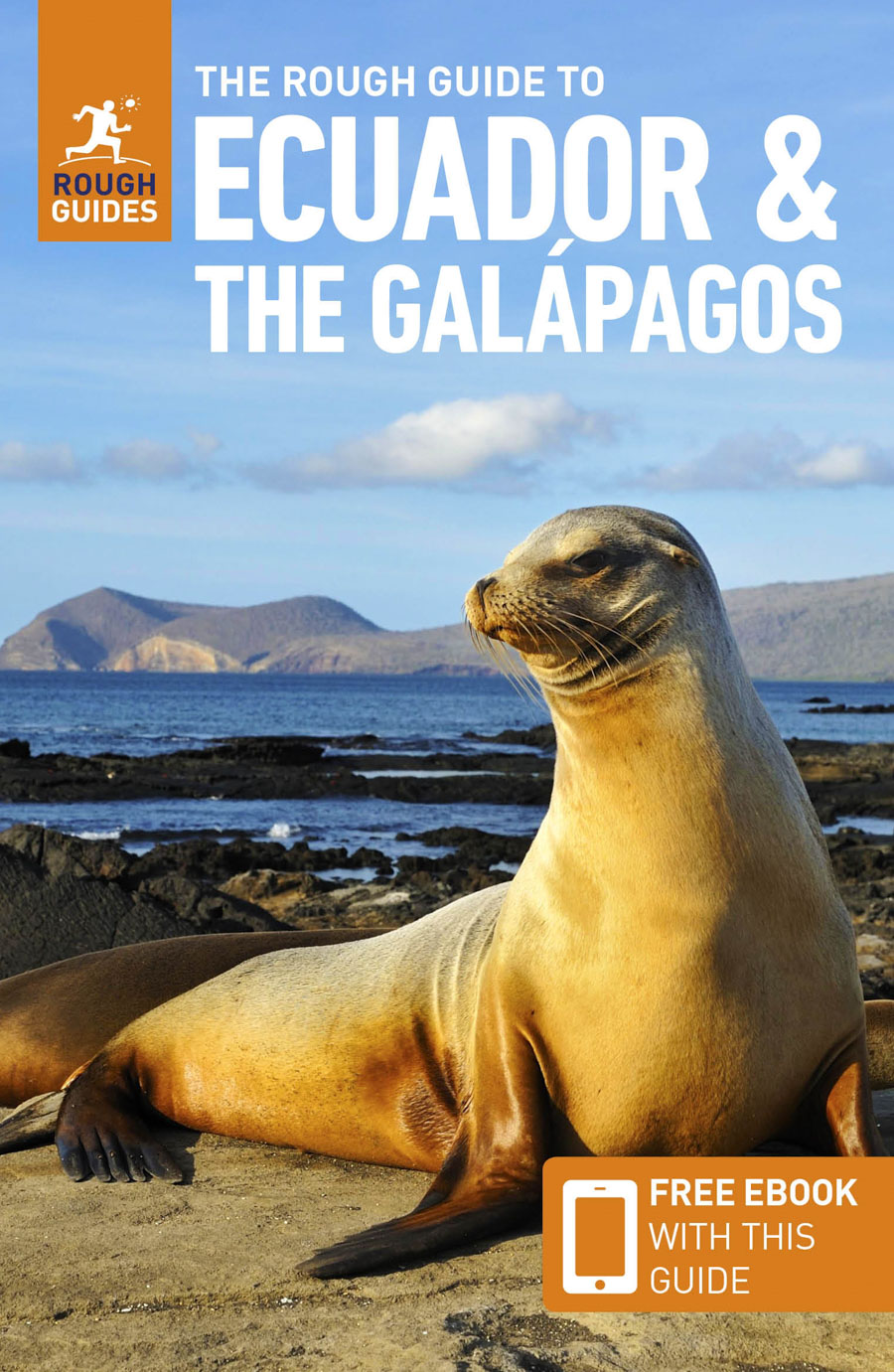 Your travel guide to Ecuador

Ready to travel and discover Ecuador?
Get support from our local experts for
stress-free planning & worry-free travels