Travelling 35km north from Holguín, through a set of mountains that locals compare to a woman’s breasts, you’ll reach the pleasingly somnolent fishing port of Gibara, which spreads from a calm and sparkling bay into the surrounding rugged hillside. This little-visited gem is just the place to spend a few hours – or even days – enjoying the tranquil views, historical ambience, get-away-from-it-all atmosphere and lush scenery; the tiny scoops of sand at Playacita Ballado and Playa La Concha are both good options for a dip after meandering through the town. Gibara is also an ideal base from which to explore the countryside and nearby pockets of interest such as the Cavernas de Panadernos caves.

Great places to visit in this region of Cuba

In 2008, Hurricane Ike wreaked havoc upon Gibara; although repairs and rebuilding are well under way, some sights are still closed, and Hurricane Sandy, which rattled through eastern Cuba in October 2012, hasn’t helped the recovery.

Founded in 1827, Gibara became the main north-coast port in Oriente because of its wide bay. During the nineteenth century the town enjoyed valuable trade links with Spain, the rest of Europe and the US, and was considered important enough to justify construction of a small fortification on the Los Caneyes hilltop, the ruins of which remain. Though small, Gibara was a fashionable and wealthy town, home to several aristocratic families and famed for its elegant edifices.

The glory days were not to last, however, and Gibara’s importance began to slip away with the introduction of the railway, which could more easily transport freight around the country. The decrease in trade left the town floundering, and during the 1920s and 1930s many townsfolk moved elsewhere in search of work, leaving Gibara to shrink into today’s pleasant village whose main industries are farming and fishing.

The name “Gibara” comes from the word giba, or hump, and refers to the Silla de Gibara, a hill which, seen from the sea, looks like a horse’s saddle. Gibarans swear this is the one Christopher Columbus mentioned in his log when approaching Cuban shores, but although he did first land in Holguín province, the hill he wrote about is generally taken to be El Yunque in Baracoa. The spot where Columbus first disembarked in Cuba on October 28, 1492, is Playa Blanca, about 20km east of Gibara, in the Bahía de Bariay; it’s marked today by a small monument on the hillside near the pretty, pale-sand beach.

Despite being off the tourist trail, Gibara is notable for its film festival, the biennial Festival de Cine Pobre, which celebrates low-budget fringe movies. Held in April, it’s based at the town’s cute Cine Jiba.

The Rough Guide to Cuba and related travel guides

Every day was another experience.

The Rough Guide to Cuba 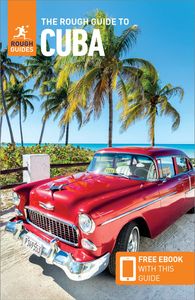 Your travel guide to Cuba

Ready to travel and discover Cuba?
Get support from our local experts for
stress-free planning & worry-free travels