Even to the most hardened cosmopolite Belize City – the country’s largest city, though not the capital – can be a daunting place. Dilapidated wooden buildings stand right on the edge of the road, offering pedestrians little refuge from the incessant traffic, and local attention ranges from simple curiosity and good-natured joking to outright heckling. Still, travellers who approach the city with an open mind – and those who are willing to spend more than a few hours here – may actually enjoy themselves. The streets, which certainly are chaotic, buzz with energy, the result of the diversity of the city’s 76,000 citizens. And the city is, without a doubt, an experience; those who manage to feel comfortable here should have no problems anywhere else in the country.

Belize City is divided into northern and southern halves by Haulover Creek, a branch of the Belize River. The pivotal (literally) point of the city centre is the Liverpool-made Swing Bridge, the only manually operated swing bridge left in the Americas. Formerly opened twice a day, it is now only operated on special request due to the decrease in river traffic. North of the bridge is the slightly more upmarket part of town, home to the most expensive hotels. South of the Swing Bridge is the commercial zone, home to the city’s banks and a couple of supermarkets. It’s all compact enough that walking is the easiest way to get around.

Accommodation in Belize City is generally more expensive than elsewhere in the country, so prices for even budget rooms can come as quite a shock. There’s usually no need to book in advance unless you’re eager to stay in a particular hotel – you’ll always be able to get something in the price range you’re looking for. Keep in mind, however, that the further south and west you go, the more dangerous the area becomes; if you are travelling alone you may want to stay north of the river near Queen Street, the city’s most populated area.

South of the Swing Bridge, Albert Street is Belize City’s main commercial thoroughfare, lined with banks and souvenir shops. On the parallel Regent Street are several former colonial administration and court buildings, collectively known as the Court House. Completed in 1926, these well-preserved examples of colonial architecture, with columns and fine wrought iron, overlook Battlefield Park (named to commemorate the noisy political meetings that took place here before independence), really just a patch of grass and trees with a dry ornamental fountain in the centre.

Bliss Centre for the Performing Arts

A block behind the Court House, on the waterfront at 2 Southern Foreshore, the Bliss Centre for the Performing Arts (Mon–Fri 8am–5pm; free; t 227-2110, w www.nichbelize.org) hosts an eclectic mix of plays and concerts in the 600-seat auditorium. In addition to hosting the country’s national art collection and a café/bar, the cultural centre can also accommodate temporary exhibitions. Performances showcase local talent, including children’s groups, solo acts and Garífuna dancers and drummers. Call or stop by for details of performances.

Throughout Belize you’ll find places bearing the name of Baron Bliss, an eccentric Englishman with a Portuguese title. A keen fisherman, he arrived off the coast of Belize in 1926 after hearing that the local waters were rich with game. Unfortunately, he became ill and died without ever making it ashore. Despite this, he left most of his considerable estate to the colony and, in gratitude, the authorities declared March 9, the date of his death, Baron Bliss Day.

Belize City’s nightlife really comes into its own on Fridays and Saturdays; any other night of the week, you’ll likely find the city deserted after 9pm, with only a few hard-drinking (and often rowdy) locals frequenting the bars that are open. On weekends, however, there are plenty of venues to choose from, playing everything from techno to Latin grooves to punta, soca and reggae, though even then don’t arrive much before midnight, or you’ll find many places empty. A relatively safe area of town with a variety of bars and clubs is the strip of Barracks Newtown Road from the Princess Hotel to Caesar’s Palace bar.

Belize City’s selection of restaurants is quite varied, though simple Creole fare (rice and beans) still predominates at the lower end of the price scale. Be warned that many restaurants close early in the evening and on Sundays. You'll find plenty of al fresco spots north of the river off Daly Street. Otherwise many hotels have attached restaurants.

East of the cathedral, on the seafront, the renovated former Government House, now renamed the House of Culture (Mon–Thurs 8.30am–5pm, Fri 8.30am–4.30pm; Bz$10; t 227-3050, w www.nichbelize.org), is one of the most beautiful spots in Belize City, with its manicured lawns and sea views. Built in 1814, the structure served as the British governor’s residence until Belizean independence in 1981. The main room downstairs exhibits the possessions of former governors as well as colonial silverware, glasses and furniture; temporary historical and cultural exhibitions are also on this floor. Upstairs are rooms for painting, dance and drumming workshops, art exhibitions and musical performances.

The Image Factory, north of the Swing Bridge at 91 N Front St (Mon–Fri 9am–5pm; free, but donations welcome; t 223-4093, w www.imagefactorybelize.com), hosts displays by Belize’s hottest contemporary artists. The gallery holds outstanding, frequently provocative exhibitions, and you often get a chance to chat with the artists themselves.

At the north end of Queen Street, in front of the Central Bank building, the city’s former colonial prison, built in 1857, has undergone a remarkable transformation to become the Museum of Belize (Mon–Thurs 8.30am–5pm, Fri 8.30am–4.30pm; Bz$10; t 223-4524, w www.nichbelize.org). The lower floor, with exposed brickwork and barred windows, recalls the structure’s original purpose and includes a reconstruction of a cell as well as a small exhibition on the jail’s former occupants. The majority of the floor, however, is devoted to photographs and artefacts chronicling the city’s history. Though these are quite interesting, the star attractions are actually upstairs, in the Maya Masterpieces gallery: a first-class collection of the best of Belize’s Maya artefacts, including some of the finest painted Maya ceramics anywhere. This floor also includes an exhibit on the jades of Belize, including a replica of the famous Jade Head from Altun Ha, as well as masks, pendants and necklaces. Visitors can also peruse a comprehensive collection of Belizean stamps and an excellent selection of the country’s insects.

Walking in Belize City in daylight is perfectly safe if you use common sense: be civil, don’t provoke trouble by arguing too forcefully and never show large sums of money on the street. Women should dress conservatively: female travellers, especially those wearing short shorts or skirts, are likely to attract mild verbal harassment from local men. However, the presence of a specially trained tourism police (227-6082), together with the legal requirement that all tour guides be licensed, generally prevents serious crime.

The chances of being mugged do increase after dark, but you’ll find that you can walk – with others – around the centre in relative safety; you’ll certainly encounter tourism police in this area. If you’re venturing further afield, or if you’ve just arrived by bus at night, travel by taxi.

Beyond the Tourism Village, the road follows the north shore of the river mouth, reaching the Fort George Lighthouse, which marks the tomb of Baron Bliss, Belize’s greatest benefactor. On the seafront itself, Memorial Park honours the Belizean dead of the world wars, and in the streets around the park you’ll find several colonial mansions, many of the best preserved now taken over by upmarket hotels. At the corner of Hutson Street and Gabourel Lane a block from the sea is the former US Embassy: a superb “colonial” building actually constructed in New England in the nineteenth century, then dismantled and shipped to Belize.

At the end of Albert Street is St John’s Cathedral (daily 6am–6pm; free), the oldest Anglican cathedral in Central America and one of the oldest remaining buildings in Belize. Begun in 1812, its red bricks were brought over as ballast in British ships – it does look more like a large English parish church than most of the other buildings here.

Continuing east along North Front Street, you’ll encounter an advance guard of trinket sellers, street musicians, hustlers and hair-braiders, announcing you’re near Tourism Village, Belize’s cruise-ship terminal. The Village itself is little more than a dock for the boats to disembark their passengers, and an attached shopping mall. Across the street, the Fort Street Plaza serves as an extension of the Village and includes a restaurant, bar and additional shops. A number of temporary vendors line the streets in this area, though the items tend to be overpriced; you’re better off buying souvenirs in town.

The Rough Guide to Belize and related travel guides

A fantastic experience with excellent organisation,superb guides with knowledge in all as history,nature etc

The Rough Guide to Belize 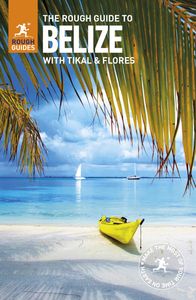 Your travel guide to Belize

Ready to travel and discover Belize?
Get support from our local experts for
stress-free planning & worry-free travels