Thanks to its three long stretches of coastline, France has plenty of great beaches. From upmarket resorts to the secluded calanques (coves) and beaches steeped with historical significance, there are a variety of opportunities for fans of the sand. Our selection of 20 top beaches was taken from the latest Rough Guide to France.

Both sides of these twinned towns have good stretches of sand, but visitors who prefer to stay right beside a beach should head for Barneville, directly across the mouth of the bay. Here, an endless exposed stretch of clean, firm sand is backed by a long row of weather-beaten villas and the occasional hotel.

Some 20km south of Calais, Wissant is a small, attractive place, popular with windsurfers and weekending Britons drawn to its enormous beach. It’s long been a preferred beach and has an interesting history as Julius Caesar launched his expedition to England from here in 55BC.

This, the westernmost of the Invasion Beaches, is steeped in history. On D-Day, 23,000 men and 1700 vehicles landed here. A minor coast road traces the edge of the dunes and enables visitors to follow the course of the fighting. Ships deliberately sunk to create artificial breakwaters are visible at low tide, and markers along the seafront commemorate individual fallen heroes.

Although the town fringes are rather overdeveloped, the centre of Les Sables-D’Olonne retains some of its gaudy charm and is a popular destination for its vast curve of pristine beach. There is plenty to do here from sailing to surfing – the surf is perfect for beginners.

This beach sweeps round the bay from the end of Quai Landry, but most of the first kilometre or so is owned by bars which rent out sun loungers for a hefty price. To avoid these, follow the track behind the sand, which will bring you to the start of a more secluded stretch. The sea might not be as sparklingly clear as at many other Corsican beaches, but it’s warm, shallow and free of rocks. 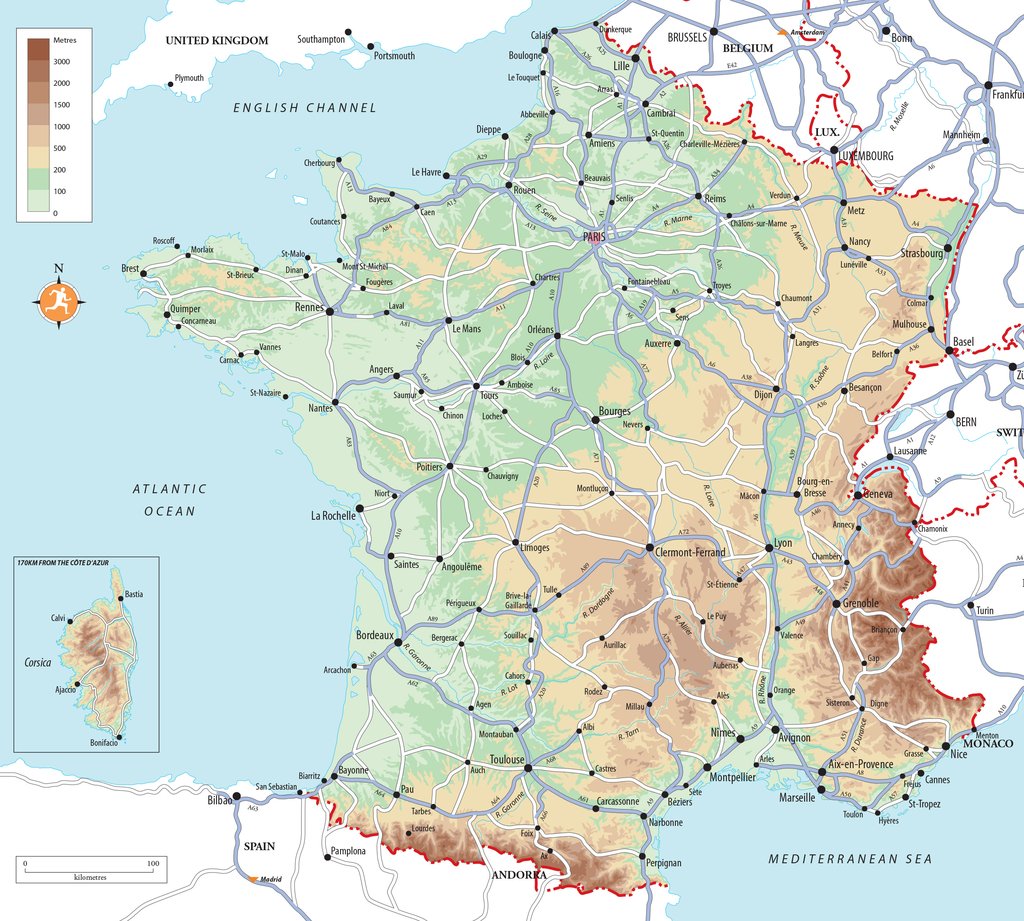 The beach of Porto consists of a pebbly cove just beyond the shoulder of the massive rock supporting the tower. To reach it from the marina, follow the little road that skirts the rock, cross the wooden bridge which spans the River Porto on your left, then walk through the car park under the trees. Although it’s rather rocky and exposed, and the sea very deep, the great crags overshadowing the shore give the place a vivid, wild atmosphere.

With its fine sandy bay – the most protected of the Basque beaches – and magnificent old quarter speckled with half-timbered mansions, St-Jean-de-Luz (Donibane Lohitzun) remains the most attractive resort on the Basque coast, despite being overrun by families in peak season.

A huge sweep of soft, white sand and turquoise sea, this beach was used at the location for the invasion sequences in the film The Longest Day. The beach is difficult to reach – a five and a half hour walk from the protected nature reserve of Désert des Agriates – but it’s worth it as it’s one of the beaches along this rugged coastline.

From the Port de la Madrague, at the eastern end of Les Lecques’ bay, there is a signposted 10km coastal path runs through a stretch of secluded beaches and unspoilt calanques (steep-walled coves) to the unpretentious resort of Bandol.

The Bay of Lannion, Brittany

Despite being set significantly back from the sea on the estuary of the River Léguer, Lannion gives its name to a huge coastal bay – and it’s the bay rather than the town that is most likely to impress. One enormous beach stretches from St-Michel-en-Grève, which is little more than a bend in the road, as far as Locquirec; at low tide you can walk hundreds of metres out on the sands.

Beyond the walls of St Malo’s citadelle (fortress) is a huge beach that stretches east beyond the featureless resort-suburb of Paramé. When the tide is low, it’s safe to walk out to the tiny island of Grand-Bé – the walk is so popular that sometimes you even need to queue to get onto the short causeway. Solemn warnings are posted of the dangers of attempting to return from the island when the tide has risen too far – if you’re too late, you can’t get back.

Just here, between the prominent headlands of Cap Blanc-Nez and Cap Gris-Nez, the D940 coast road winds high above the sea, allowing you to appreciate the “opal” in the name – the sea and sky merging in an opalescent, oyster-grey continuum. The southern part of the coast is flatter, and the beach, uninterrupted for 40km, is backed by pine-anchored dunes and brackish tarns, punctuated by German pillboxes toppled over by the shifting sands.

These beaches, situated south of a rocky outcrop, are two clear kilometres of sand and surf, although the latter loses its sandy beach at high tide leaving perilous rocks to circumnavigate the way back to land. A number of surf schools and board-hire companies can be found at the north end near the old town.

A golden semicircle of sand edged by short twisted umbrella pines and red rocks, the plage de Palombaggia is south Corsica’s trademark beach, and indisputably one of the most beautiful bays in Europe. Come here outside the school holidays, when it’s not overwhelmingly crowded, and you’ll find it hard to resist the striking colours and serene, clear water. Just south of here are two other smaller, quieter beaches – Cala di la Folaca and the Plage d’Acciaju – where the sand is just as white and the water equally translucent.

For a gloriously unspoilt stretch of sand head to Côte Sauvage, a wild and highly unswimmable part of the Atlantic coastline, where the stormy seas look like snowy mountain tops. The sheltered eastern side has safe and calm sandy beaches, and plenty of campsites.

For plenty of choice, the sheltered Golfe du Morbihan – meaning “little sea” in Breton – is one of the loveliest stretches of Brittany’s coast. While its only large town, medieval Vannes, is well worth visiting, its endlessly indented shoreline is the major attraction, with superb vistas at every turn, and countless secluded beaches. It is said that the gulf used to hold an island for every day of the year, but rising seas have now left fewer than one per week.

Île de Noirmoutier is a 20km-long island of sandy inlets, pine forests and salt marshes. In the busiest of the island’s towns lies the most famous of its beaches, Plage des Dames, with quaint little painted bathing huts and fine yellow sand.

This legendary beach, great for showing off your board and sun tan is sited on the north edge of the old town by the famous casino. With its golden sand, beautiful views and famous backdrop, people come in their droves to see and be seen. Consequently restrictions on the number of bathers and surfers come in to force at busier times.

A line of beaches, sculpted into little crescents by stone breakwaters and busy with bathers and windsurfers in summer, stretches away west from Stes-Maries’ central core of white-painted, orange-tiled houses, while the pleasure port to the east offers boat trips to the lagoons and fishing expeditions.

This is the nearest beach to the 19th century military settlement of Porquerolles, on the Île de Porquerolles. Plage d’Argent is a 500m strip of white sand, fringing a curving bay backed by pine forests and has a pleasant restaurant.