Exploring the Brecon Beacons in a Twizy: a foodie's tour

A new green initiative has been launched in the Brecon Beacons. The Eco Travel Network was established by local researchers and business owners to offer a pool of electric vehicles to visitors who want to explore the region while keeping their carbon footprint low. These Renault Twizys carry two people and run on batteries that can be topped up at a number of local charging points.

I might as well admit it upfront: we've just run out of battery. And yes, it's probably my fault. Everything was  going so well up until this point. The Twizy was cruising at a comfortable 40mph, the perfect speed to take in the vast snow-capped expanses of the Brecon Beacons. My wife was bundled in the back, peering out of a pile of blankets at the unspeakably beautiful scenery. We were getting hoots of the horn and nods of the head from smiling locals on both sides of the street. The hill up to Pengenffordd was our last challenge before hitting the charming town of Talgarth.

And then we grind to a halt. The strange thing is, neither of us lose our sense of humour. There’s many, many worse places to break down in the world than on the tranquil crest of a Black Mountain peak and, as the Twizy can be plugged into a standard wall socket, we’re not too worried about charging back up. Before long a local resident, Gez, appears on the horizon and packs us into his Volvo to thaw, and we make the two mile descent to Talgarth. So close, and yet so far.

“People used to bypass this place” Gez reflects, on the short journey down the hill. “Then they built a road round it, and now they literally bypass it” he chuckles. We’re on our way to Talgarth Mill, a fully-restored 18th century flour mill built and run by local residents. It’s the main reason more and more tourists are now turning off the ring road to investigate this charming Welsh spot of about 1,600 people nestled in the northern extremities of the Brecon Beacons.

Milling and baking in Talgarth

Gez is one of the many local residents who volunteer at the mill, offering up their time and expertise to keep the water wheel turning and the flour ground. He and other keen locals give us a quick tour of the renovated apparatus, from wheel to grind stone, before wrapping us in aprons and putting our noses to the latter. I’d like to say it’s back-breaking work, but the water puts in most of the effort. We just have to run up and down the stairs a few times ensuring the flow of grain is correct and the gears are well oiled. Still, seeing our freshly-milled flour flow into huge sacks is rewarding and before long we expend enough calories to justify lunch. We just have to bake it first.

Stephanie relocated to the Talgarth region from Scotland, one of many people we meet drawn to the area from far away. She runs the ajoining Bakers’ Table cafe, rustling up all manner of  baked delights for appreciative residents. Bara Havard (white with rye), Bara’r Felinwr (seeded wholemeal) and various guest breads incorporating anything from olives to apricots leave her ovens before being snapped up at the counter. Within minutes we’re arms-deep in dough and kneading all manner of blobs into some semblance of shape. We’re attempting to make Blaenavon smoked cheese and wild garlic loaves, and while the three shapes we end up with vary greatly in dimensions they’re all incredibly moreish.

Over a spread of delicious breads, local ham and salmon, and a pesto so fresh it pogos on our tongues, we chat to Adele Nozedar, a local forager who gave up her job at a London record company to relocate to Talgarth, about the delights to be found in the local hedgerows. Unfortunately the snow and someone's big battery miscalculation have prevented a foray ourselves but there’s evidently lots to be gathered.

Hover over the red dots on the interactive map below to see images from the region Tim explored, plus videos of Talgarth Mill, a map of Twizy charge points and more. 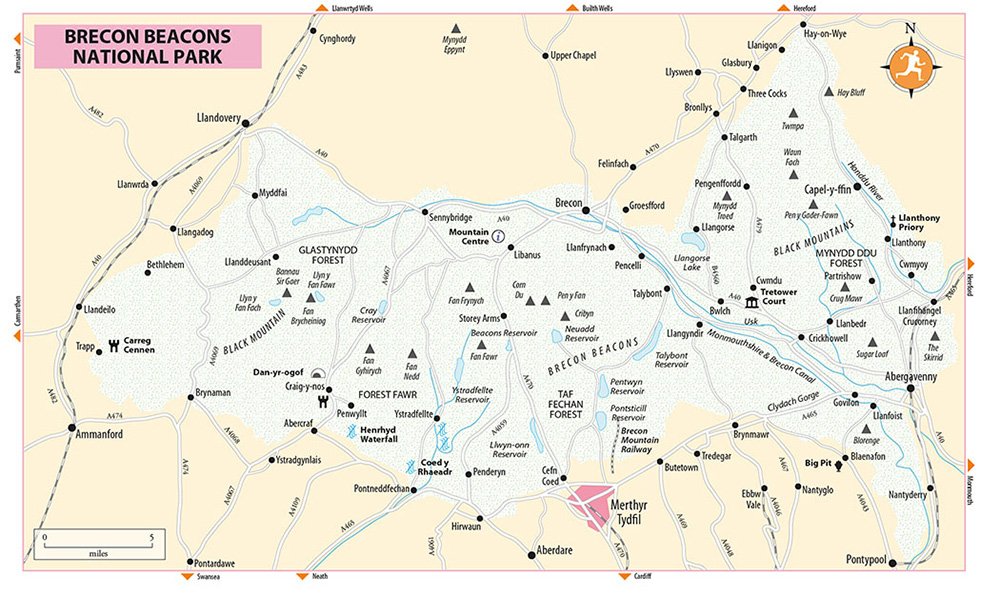 Rolling out of Talgarth in the Twizy, full of belly and battery, we head for the Westview Guesthouse in Llowes, one of the local B&Bs offering a charge point and owned by Ian and Julie Foster, who co-run the Eco Travel Network. The welcoming couple give us a few tips on the cars and provide a beautiful retreat to catch some rest before a top notch Welsh breakfast of local produce, incuding laver bread, and another day of eating.

Day Two is all about chocolates and cycling, one making room for the other. After a quick pedal to Hay-on-Wye (with bikes kindly lent from Drover Holidays) to stock up on vintage Penguins, we take the Twizy to Crickhowell. At a local B&B a gregarious proprietor pulls an extension cable out of a window for the car and - after explaining how the vehicle works to a few bemused ramblers - we explore the market town and head to Black Mountain Gold Chocolate. Here yet another person drawn to the region gives us a masterclass in egg-making. Jules James returned here after living most of his life in Canada. A font of brilliant anecdotes about his life as a chef around the world and a drummer in various rock bands, as well as a constant feeder of choccy nibbles, he’s great company and we leave with bags of Easter treats.

After an evening gorging once again in Hay, we set out for the final gastro-push. Glasbury’s River Cafe is the Sunday lunch spot, a bright and airy restaurant on the banks of the Wye that’s attracted rave reviews (and an infamous anecdote) from the national press. After a one-way kayak down the river to Hay, with the canoe centre picking bringing us back from the town in a minibus, we tuck into pan-fried liver and fresh salads, before taking the Twizy for one more spin to Abergavenny’s Angel Hotel.

This charming boutique property is home to a devilish afternoon tea that attracts local foodies from miles around. A series of infusions as refreshing as they are exotic accompany plate after dainty plate of sandwiches, pastries, scones and cream. We sip Yunnan Gold Pearls and sup Nigiri Frost, working our way round Asia and filling up fast. As the Bank Holiday sun drops below the windowsill of the Angel’s banquet room we consider a walk through the fields behind Abergavenny, but reach instead for another scone.

Read about Rachel Mills' experiences in the Twizy >

Book your trip with Rough Guides

Exploring the Brecon Beacons in a Twizy: An Eco Tour

The Rough Guide to Europe on a Budget
ebook: $17.99 View guidechevron_right
View all guideschevron_right

Explore places to visit in Wales

Your comprehensive guide to travel in Wales

Chicago's Magnificent Mile on a budget

Ten things to do in Chicago for free