At any time of the year, Edinburgh is a city of culture, books, and tradition – but in August, thanks to a variety of festivals, all three are amplified to full volume. From the hundreds of theatre, comedy and cabaret shows of the Edinburgh Fringe festival, through the pomp of the Edinburgh Military Tattoo, to the heavyweight names at the Book Festival, the city is the world’s summer arts capital. The benefit of so much going on is that you are never far from the next cultural event – meaning that with a little planning, you can blend the best of Edinburgh’s attractions with discovering the next big thing.

If you stand in Princes Street Gardens in the centre of town, you can see the city rise up around you. To its north is shopping drag Princes Street, with the stout Georgian architecture of the New Town climbing up behind it. Head south down the Mound, past the excellent Scottish National Gallery and climb the steep streets to hit the Royal Mile – marked as the High Street on many maps – which serves as a high street for the Old Town. It runs from the imposing castle to Holyrood Palace.

If you want to get even higher, climb up one of the city’s many hills: Arthur’s Seat is the most famous (you’ll even find a daily comedy show there at 1pm during the Fringe), but nearby Calton Hill is the hidden gem, featuring an abandoned Parthenon-esque monument. Or you could stay in Princes Street Gardens and pay the £3 to climb the Scott Monument, dedicated to Sir Walter Scott.

While August’s festival schedule covers every possible venue in the city, you can get your bearings by starting with the hub of the action: Bristo Square is the centre of Fringe activity, housing the Underbelly’s giant inflatable purple cow, with the Gilded Balloon and Pleasance Dome both nearby. Charlotte Square, near Princes Street Gardens, is home to the book festival, and offers free, thought provoking nightly shows throughout August. 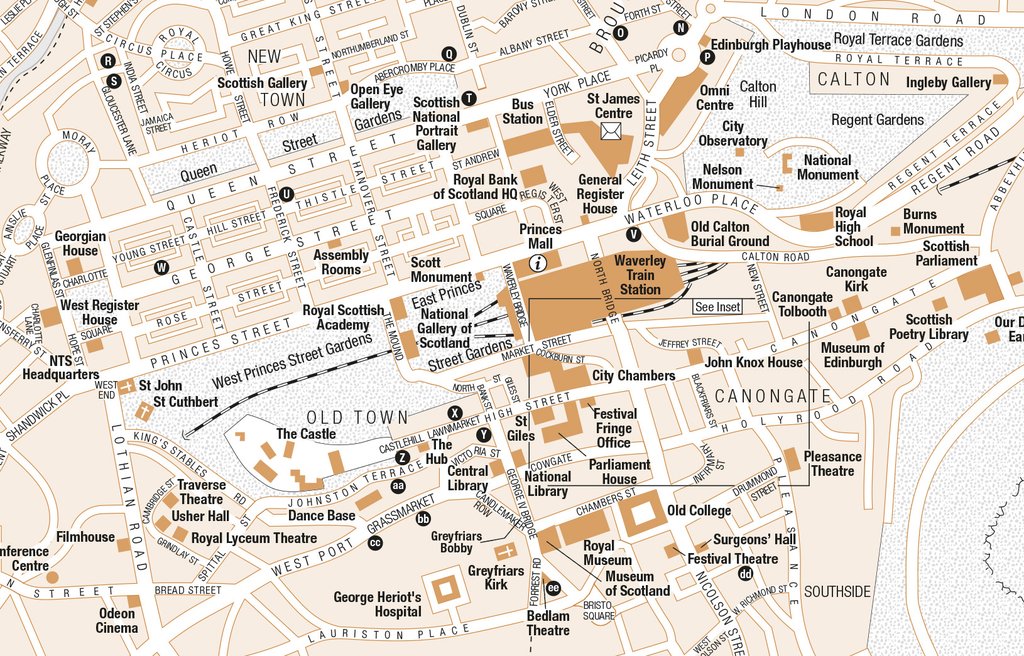 Edinburgh Castle’s craggy perch is a good place to load up on history (rather than the disappointing Edinburgh Museum) and while there, pop into its Camera Obscura and World of Illusions exhibit for a more fun way to see the city. The castle is also home to the Military Tattoo – book ahead as it always sells out – and the Witchery restaurant provides some of the classiest dining in town. Although, if you want to chow down somewhere cheaper, the Mosque Kitchen serves huge portions of curry at knockdown prices. To see another side to the city’s history, try the supposedly haunted 17th century Mary King’s Close, then steady yourself afterwards by visiting the Scotch Malt Whisky Society, showcasing an unpretentious but classy knowledge to Scotland’s whisky heritage.

Edinburgh also has a strong tradition of independent shops. Avoid the mediocre high-street names of Princes Street and head to the fabulous department store Harvey Nichols on St Andrew Square – it even has a Chocolate Lounge featuring a conveyor belt of cake and champagne – or browse the independent bars and shops of Broughton Street, including sci-fi bookshop Transreal. The Old Town’s indie shops cluster around the Grassmarket (don’t forget to pop into Greyfriars Kirk and see the statue of famously faithful dog Bobby), while nearby West Port offers loads of great second-hand bookshops.

The best of the fest

If you want to see some of the Fringe while in Edinburgh, it’s easy to find yourself overwhelmed with choice. There are hundreds of venues across the city this year, so how do you pick what to watch? Avoid the flyerers on the Royal Mile and pick up Fringe bible Three Weeks and the newer Fest Mag around town, or browse the British Comedy Guide’s online index of all the Fringe reviews.

Some tips comedywise: there’s a lot of hot interactive comedy this year, including the controversial Australian hit Come Heckle Christ (10.20pm) and the live version of British kids’ TV show classic Knightmare (5.30pm), both at the Pleasance Courtyard. Indeed, the Courtyard probably has the best programme this year, and great bars to boot. There’s also panel show fave James Acaster (8pm), the comedy night where comedians are pushed to be ‘honest to point of regret’ It Might Get Ugly (11pm) and Ivo Graham (8.15pm), who is likely to blow up as the next big thing in comedy.

Then there’s the Free Fringe. Some of the best shows this year are at the Banshee Labyrinth, including Chris Boyd’s tales of chasing storms in the American Midwest (1.15pm) and sardonic poet Rob Auton (4pm) with his show about faces. Expect to pay around £10 for paid-for shows; it’ll be more for big TV names. There’s lots of shows on the Free Fringe but keep a couple of quid in your pocket to put in the bucket at the end.

Explore more of Scotland with the Rough Guide to Scotland.

Book Your Trip To Scotland

Fire festivals around the world

10 great festivals and events across the UK

Explore places to visit in Scotland

Your comprehensive guide to travel in Scotland

Edinburgh and the Lothians

An Interview with Pico Iyer