Preoccupied by the fjords and the long road to Nordkapp, few tourists are tempted to explore central Norway. The Norwegians know better. This great chunk of land, trapped between Sweden and the fjords, boasts some of the country’s finest scenery, with the forested dales that trail north and west from Oslo heralding the region’s mountain passes and rearing peaks. And among much else, it’s here, within shouting distance of the country’s principal train line and the E6 – long the main line of communication between Oslo, Trondheim and the north – that you’ll find three of Norway’s prime hiking areas. These comprise a trio of mountain ranges, each partly contained within a national park – from south to north, Jotunheimen, Rondane and the Dovrefjell-Sunndalsfjella.

place North to Kongsvoll place Oslo to the western fjords

There are four main highways running from Oslo and its environs to the fjords. Whichever one you choose, allow a little time to appreciate the wonderful scenery and to muse on the ingenuity of Norway’s road builders – and the difficulty of communication before they set to work: until well into the 1970s, a trip to Oslo from many a fjordland village could take at least a couple of days. Among these four major highways, the E6 is the busiest, running up the Gudbrandsdal valley past several historic sights and within easy striking distance of a battery of national parks, most notably Jotunheimen, Rondane and Dovrefjell-Sunndalsfjella. Of the three, Jotunheimen is the harshest and most stunning, with its string of icy, jagged peaks; the Dovrefjell-Sunndalsfjella is more varied with severe mountains in the west and open moors and rounded ridges in the east; while Rondane, a high alpine zone, has more accessible mountains and low vegetation. Each of the parks is equipped with well-maintained walking trails and DNT huts, two of which – Rondvassbu and Gjendesheim – are ideal for hiking expeditions deep into Rondane and Jotunheimen respectively. For Dovrefjell-Sunndalsfjella, the easiest place to start is Kongsvoll, on both the E6 and the train line. The E6 also passes reasonably near to the intriguing old copper-town of Røros and, even better, it’s the starting point for Highway 15 and the E136, two magnificent roads that thread through the mountains to the fjords.

On the other hand, the E16 is the most direct route to the fjords, a 350km yomp up the Valdres valley and over the Filefjell mountain pass to Lærdal, firmly in fjord country and at the start of the series of long tunnels that enable the E16 to fast-track west to Flåm and ultimately Bergen. The long lakes and wooded hills of the Valdres valley make for a delightful drive and on the way you’ll shoot past several stave churches, though the most beautiful and certainly the most famous is beyond the valley, over the Filefjell pass, at Borgund.

Further south, the first part of Highway 7, the long haul up the Hallingdal valley, is perhaps the least diverting way to get to the fjords, but later on the road does traverse the wonderfully wild Hardangervidda mountain plateau. You can also fork north from Highway 7 along Highway 50, which thunders down the dramatic Aurlandsdalen valley bound for the fjords at Aurland, near Flåm. Finally, there’s the E134 to Odda and Lofthus, which has the advantage of passing through the attractive former silver-town of Kongsberg and within a whisker of Dalen, with its excellent hotel, before making a dramatic defile across the Hardangervidda and then proceeding up and over the wild and desolate Haukelifjell mountain pass.

In terms of accommodation, roadside campsites are commonplace, there’s a reasonable supply of HI hostels, and every town and village has at least one hotel or guesthouse. 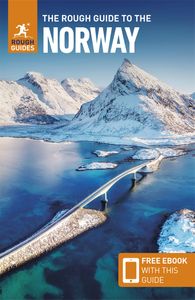