If there’s one familiar and enticing image of Norway it’s the fjords, giant clefts in the landscape running from the coast deep into the interior. Rugged yet serene, these huge, wedge-shaped inlets are visually stunning; indeed, the entire fjord region elicits inordinate amounts of purple prose from tourist-office handouts, and for once it’s rarely overstated.

place Bergen and around place The western fjords

The fjords are undeniably beautiful, especially around early May, after the brief Norwegian spring has brought colour to the landscape; but winter, when all is unerringly quiet, has its charms too, the blue-black waters of the fjords contrasting with the blinding white of the snow that blankets the hills, valleys and mountains. In summer, the wilds are filled with hikers and the waters patrolled by a steady flotilla of bright-white ferries, but don’t let that put you off: the tourists are rarely in such numbers as to be intrusive, and even in the most popular districts, a brief walk off the beaten track will bring solitude in abundance.

The fjords run all the way up the coast from Stavanger to the Russian border, but are most easily – and impressively – seen on the west coast near , the self-proclaimed “Gateway to the Fjords”. Norway’s second-largest city, Bergen is a welcoming place with an atmospheric old warehouse quarter, a relic of the days when it was the northernmost port of the Hanseatic trade alliance. It’s also – as its tag suggests – a handy springboard for the nearby fjords, beginning with the gentle charms of the and the Flåmsdal valley, where the inspiring mountain railway trundles down to the Aurlandsfjord, a small arm of the mighty . Dotted with pretty village resorts, the Sognefjord is the longest and deepest of the country’s fjords and is perhaps the most beguiling, rather more so than the , lying parallel to the north. Between the Sognefjord and Nordfjord lies the growling and groaning , mainland Europe’s largest ice-sheet, while east of the Nordfjord is the narrow, S-shaped , a rugged gash in the landscape that is perhaps the most beautiful of all the fjords. Further north still, the scenery becomes even more extreme, reaching pinnacles of isolation in the splendid mountain highway, a stunning prelude to both the somewhat hang-dog town of and the charming port of , with its attractive Art Nouveau buildings. 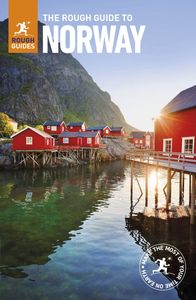