Although almost half of it was once under water, the Netherlands is one of the most urbanized – and densely populated – nations on earth, with a huge range of places to visit packed into a relatively small area. A remarkable country – no more than the size of the US state of Maryland – it’s a largely man-made affair, around half of which lies at or below sea level. Its fertile, pancake-flat landscape is gridded with drainage ditches and canals, beneath huge open skies, while the country’s towns and villages are often pristine and unchanged places of gabled townhouses, pretty canals and church spires. Despite the country’s diminutive dimensions, each town is often a profoundly separate place with its own distinct identity – indeed there’s perhaps nowhere else in the world where you can hear so many different accents, even dialects, in such a small area. In spring and summer the bulbfields provide bold splashes of colour, and in the west and north the long coastline is marked by mile upon mile of protective dune, backing onto wide stretches of perfect sandy beach.

A major colonial power, the Dutch mercantile fleet once challenged the English for world naval supremacy, and throughout its seventeenth-century Golden Age, the standard of living was second to none. There have been a few economic ups and downs since then, but today the Netherlands is one of the most developed countries in the world, with the highest population density in Europe. It’s an international, well-integrated place too: most people speak English, at least in the heavily populated west of the country; and most of the country is easy to reach on a public transport system of trains and buses, whose efficiency may make British and American visitors weep with envy.

Successive Dutch governments have steered towards political consensus – indeed, this has been the drift since the Reformation, when the competing pillars of Dutch society learnt to live with – or ignore – each other, aided by the fact that trading wealth was making most people richer. Almost by accident, Dutch society became tolerant, and, in its enthusiasm to blunt conflict, progressive. These days, many insiders opine that the motive behind liberal Dutch attitudes towards drug use and prostitution isn’t freewheeling permissiveness so much as apathy –and even that is under threat, with an official clampdown on Amsterdam’s coffeeshop culture. In addition, the country’s avowed multiculturalism has been severely tested in recent years, with the shootings of Theo van Gogh and the politician Pim Fortuyn persuading many to reassess the success of the Netherlands’ consensual politics.

Where to go in the Netherlands

Mention you’re going to the Netherlands and most people assume you’re going to Amsterdam. Indeed for such a small and accessible country, the Netherlands is relatively unknown territory. Some people may confess to a brief visit to Rotterdam or Den Haag (The Hague), but for most visitors Amsterdam is the Netherlands, the assumption being that there’s nothing remotely worth seeing elsewhere. To accept this is to miss much, but there’s no doubt that the capital has more cosmopolitan dash than any other Dutch city, both in its restaurant and bar scene and in the pre-eminence of its three great attractions. These are the Anne Frank Huis, where the young Jewish diarist hid away during the World War II Nazi occupation; the Rijksmuseum, with its wonderful collection of Dutch paintings, including several of Rembrandt’s finest works; and the peerless Van Gogh Museum, with the world’s largest collection of the artist’s work.

In the west of the country, beyond Amsterdam, the provinces of Noord- and Zuid-Holland are for the most part unrelentingly flat, reflecting centuries of careful reclamation work as the Dutch have slowly pushed back the sea. These provinces are predominantly urban, especially Zuid-Holland, which is home to a grouping of towns known collectively as the Randstad (literally “rim town”), an urban sprawl that holds all the country’s largest cities and the majority of its population. Travelling in this part of the country is easy, with trains and buses that are fast, inexpensive and efficient; highlights include easy-going Haarlem; the old university town of Leiden; Delft, with its attractive medieval buildings and diminutive, canal-girded centre; and the gritty port city of Rotterdam, festooned with prestigious modern architecture. Den Haag (The Hague), is well worth a visit, too, a laidback and relaxing city, seat of the Dutch government and home to several excellent museums. Neither should you miss the Keukenhof gardens, with the finest and most extensive bulbfields in the country. To the north of Amsterdam, the old Zuider Zee ports of Enkhuizen and Hoorn are very enticing, as is the small town of Alkmaar, with its unashamedly touristy cheese market, and the small villages and unspoilt dunescapes of the coast.

Beyond lies a quieter, more rural country, especially in the far north where a chain of low-lying islands – the Frisian Islands – separates the open North Sea from the coast-hugging Waddenzee. Prime resort territory, the islands possess a blustery, bucolic charm, and thousands of Dutch families come here every summer for their holidays. Apart from Texel, the islands lie offshore from the coast of the province of Friesland. Friesland’s capital, Leeuwarden, is a likeable, eminently visitable city, while neighbouring Groningen is one of the country’s busiest cultural centres.

To the south, the provinces of Overijssel and Gelderland are dotted with charming old towns, notably Deventer and Zutphen, while their eastern portions herald the Netherlands’ first few geophysical bumps as the landscape rolls up towards the German frontier. Here also are two diverting towns: Arnhem, much rebuilt after its notorious World War II battle, but a hop and a skip from the open heaths of the Hoge Veluwe National Park, and the lively college town of Nijmegen.

Further south still are the predominantly Catholic provinces of Limburg, Noord-Brabant and Zeeland. The last of these is well named (literally “Sealand”), made up of a series of low-lying islands and protected from the encroaching waters of the North Sea by one of the country’s most ambitious engineering plans, the Delta Project. Heading east from here, you reach Noord-Brabant, gently rolling scrub-and farmland which centres on the historic cities of Breda and ’s Hertogenbosch, and the more modern manufacturing hub of Eindhoven, home to electronics giant Philips. The hilly province of Limburg occupies the slim scythe of land that reaches down between the Belgian and German borders, with its cosmopolitan capital, Maastricht, being one of the Netherlands’ most convivial cities.

• With 20 million bikes in the country – 1.25 for every inhabitant – the Netherlands has the highest level of bicycle usage in the world. However, one bike is stolen every minute of every day around the country.

• The Netherlands is a constitutional monarchy presided over by Queen Beatrix, who was crowned in 1980. The country’s bicameral parliament sits in Den Haag and comprises an Upper House or First Chamber of 150 directly elected deputies and a Lower House or Senate of 75 senators.

• Every year each Dutch person eats four kilos of Dutch liquorice or drop, which comes in a never-ending supply of sweet, salty and flavoured varieties. Often sold in pharmacies, it was once believed to have medicinal properties, and is as Dutch as tulips and clogs.

• The Dutch concept of gezelligheid has no direct translation, but loosely speaking it means cosy, convivial or fun – and it’s the mission of Dutch folk to create a gezellig atmosphere or enjoy a gezellig time on most occasions.

From travel safety to visa requirements, discover the best tips for traveling to Travel Guide Netherlands

The Rough Guide to Netherlands and related travel guides

The Rough Guide to Netherlands 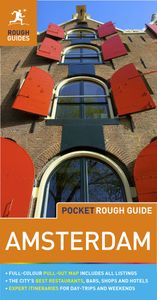 Your travel guide to Netherlands

Ready to travel and discover Netherlands?
Get support from our local experts for
stress-free planning & worry-free travels