North of Sinaloa, Hwy-15 slices into Sonora, the second-largest state in Mexico and the nation’s breadbasket; note that Sonora is one hour behind Sinaloa in the summer (April–Oct). There’s little to stop for on the road, though the handsome colonial town of Álamos is a worthy diversion, and low-key beach resorts at San Carlos, Bahía de Kino and Puerto Peñasco provide some relief from the scorching heat. From the coast it’s a long drive through the desert to the US border at Nogales or the boundary with Baja California at the Colorado River – you’ll also have to put your watch back an hour when you cross this state line, unless Baja California is on Daylight Saving Time (April–Oct), in which case there’s no change.

In January, everything changes in Álamos, when thousands of people descend upon the town for the week-long Ortiz Tirado music festival, established in 1985 in honour of the late Dr Alfonso Ortiz Tirado (born in Álamos in 1893), sometimes referred to as the “Mexican Pavarotti”. The festival includes exhibitions, dance performances, workshops, lectures, musical events and concerts from Mexico’s best classical musicians and singers. Accommodation is usually booked solid at this time, so reservations are a must.

Boasting more than 15km of pristine Sea of Cortez coastline, 110km west of Hermosillo, BAHÍA DE KINO is a popular weekend escape for locals and increasingly a winter resort for North American snowbirds. For good reason; the seafront is padded with many kilometres of inviting sands, the placid waters are perfect for swimming and kayaking, the offshore islets and strange rock formations make the sunsets particularly memorable and the resort remains relatively low-key – for now. There are two settlements around the bay: the old fishing village of Kino Viejo, a dusty collection of corrugated-iron huts, passed over by the fruits of development, and the younger Kino Nuevo – an 8km strip of one-storey seafront houses, trailer parks and a handful of hotels and restaurants.

Not long ago, PUERTO PEÑASCO was little more than a tiny shrimping port. Since the 1990s, though, the town has exploded into a major resort for Arizona’s beach-starved masses, and it is now filled with high-rise condominiums. Travel warnings and the 2009 US recession hit Puerto Peñasco hard, but now things have settled down the development is sure to continue: a new highway along the coast (reducing driving times from California) opened in 2008, and the new Mar de Cortés International Airport was inaugurated one year later. If you like resorts, golf or just fancy a couple of days on the beach before heading into the US, “Rocky Point” (as the expat community calls it) can be lots of fun. Note that temperatures regularly top 40°C (104°F) in the summer.

The region’s most impressive natural attraction, the Reserva de la Biósfera El Pinacate y Gran Desierto de Altar, lies north of Puerto Peñasco on Hwy-8. NASA used this otherworldly expanse of volcanic cinder cones and craters to train its astronauts for lunar landings. One of Pinacate’s largest and most awe-inspiring craters, “El Elegante”, is 1.6km wide and 250m deep and can be seen from space. Exhibits at the Centro de Visitantes Schuk Toak provide background, as well as displays of Tohono O’odham artefacts.

An important shrimp-fishing port on the main Hwy-15 corridor, GUAYMAS, around 180km north of Navojoa, claims some proud history but has little to offer visitors. Unless you’re looking for somewhere to crash for one night, it’s advisable to head for nearby beaches; the resort town of San Carlos is just a short bus ride away. One reason to linger in Guaymas is the annual carnival, held here in February since 1888 and one of Mexico’s best (it begins on the Thurs before Ash Wednesday and ends at the beginning of Lent). Concerts and parades are held all over town (the main location is the Plaza de los Tres Presidentes), beginning with the traditional burning an effigy of something or someone who has upset the public that year (Vicente Fox and George Bush have both featured in the past). Note that accommodation in town is booked months in advance for carnival.

The coast around Bahía de Kino is the traditional home of the Seri people, once semi nomadic hunter-gatherers who have managed to hang on to their linguistic and cultural traditions. Their former home on the offshore Isla del Tiburón (Shark Island), was made into a wildlife refuge in the 1960s but is still administered by the tribal government. You may come across Seri hawking traditional (and not so traditional) ironwood carvings along the beach in Kino Nuevo, though their main settlement is Punta Chueca, 35km north – you can buy genuine crafts here, but you’ll need your own wheels to reach the settlement. The tiny Museo de los Seris, on the plaza in the middle of Kino Nuevo, gives a little more information on Seri history. 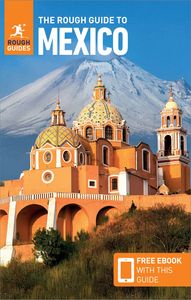