Nowhere in Germany gives such a powerful impression of the highs and lows of German history as the former free imperial city of NUREMBERG. Despite terrible destruction during World War II, much of the city remains convincingly medieval in appearance, and when touring the forbidding Kaiserburg or exploring surviving lanes of half-timbered houses in the city’s Altstadt, which is still encircled by its medieval city walls, it’s easy to imagine how the Nuremberg of Albrecht Dürer, Veit Stoss or the Meistersingers might have looked. Not surprisingly the museums – from the intimate Albrecht-Dürer-Haus to the encyclopedic Germanisches Nationalmuseum – are compelling.

Great places to visit in this region of Germany

From 1050 to 1571 – when the custom died out – Nuremberg was the nearest thing the Holy Roman Empire had to a capital, for it was here that newly chosen emperors held their imperial Diet or Reichstag. At the same time, commercial acumen and artisan skills – above all in metalworking – made the city one of the wealthiest and most important trading centres in Europe, despite the poverty of its rural hinterland and the lack of a navigable river. And then – happily for today’s visitors – it fell into a long decline, which spared its medieval monuments from ruinous “improvement” or replacement. As for a historical low point, what’s remarkable is how much is still recognizable from Leni Riefenstahl’s hypnotic film images of the 1930s Nazi party rallies, not least at the Zeppelintribüne where Hitler addressed the massed, uniformed crowds. The dictator purloined the medieval credentials of this most German of all German cities in order to lend credibility to his regime; as a consequence no other city is more closely associated with the Nazi movement – certainly not Munich, where it was actually born.

The introduction of driverless trains on the Nuremberg U-Bahn in 2008 prompted the quip that things run better without a Führer – Führer also being the German for driver – but the city of the Nuremberg rallies, Nuremberg laws and postwar Nuremberg trials can never be entirely rid of the association. It’s greatly to the city’s credit that it handles this sensitive legacy with such honesty, and a visit to one or more of Nuremberg’s Nazi monuments south and west of the city is an essential counterpoint to the Altstadt’s medieval glories. Away from the centre much of Nuremberg is surprisingly industrial and working class, which helps make it a rare stronghold of the left-of-centre SPD party in conservative Bavaria.

Nuremberg’s most famous annual event is the Christkindlesmarkt (christkindlesmarkt.de), perhaps the world’s most famous Christmas market, which animates the Hauptmarkt from the end of November until Christmas Eve, with 180 wooden stalls selling everything from Lebkuchen to Christmas decorations and traditional wooden toys. The market dates back to the sixteenth century and its history mirrors that of Nuremberg itself, having gradually dwindled in importance from the early years of the twentieth century until the Nazis returned it to the centre of the city they described as the “Reich’s treasure chest”. Despite the Altstadt’s destruction in World War II, the market was re-established as early as 1948.

Leni Riefenstahl and the Reichsparteitage

After the Machtergreifung (Nazi seizure of power) in 1933, the Reichsparteitage or party rallies became an annual ritual, attracting massive numbers of participants and hangers-on. A vast, self-glorifying Parteitagsgelände (party rally ground) was therefore planned, and though much of it – including the colossal Deutsches Stadion, which would have accommodated 400,000 spectators – was never built, what survives gives a powerful impression of the gigantism that was designed, in part, to shrink the role of the individual into insignificance and to create an overwhelming experience for the participants that appealed to the emotions, not to reason. The rallies had a wider audience too, for during the 1930s many foreign newspapers sent reporters to cover the event. Leni Riefenstahl (the regime’s favoured documentary-maker) used a crew of 170 and some ground-breaking camera techniques to record the 1934 rally for her film The Triumph of the Will; the crowning event of the 1935 rally was the special session of the Reichstag convened in Nuremberg to pass the anti-Semitic Nuremberg Laws.

Slim, char-grilled Nürnberger Bratwürste are Nuremberg’s savoury speciality, and though the little sausages are served in high style in quite fancy restaurants, they’re never more delicious than when eaten hot from a street stall Drei im Weckla – three in a bun. One of the best places to try them is Bratwursthaüsle by the Sebalduskirche (Mon–Sat 10am–10pm; 3 im Weckla €2). More substantial savoury dishes are often served with Nürnberger Klösse (potato dumplings), which are good fuel on a wintery day and excellent for soaking up meaty sauces. You can buy Nuremberg’s famous sweetly-spiced Lebkuchen gingerbread – originally a Christmas treat, but now available all year around – at Wicklein at Hauptmarkt 7 (Mon–Fri 9.30am–6.30pm, Sat 9.30am–4pm) or from Schmidt at Plobenhofstr. 6 (Mon–Fri 9am–6.30pm, Sat 9–4pm). You can get gluten-free and diabetic versions from Fraunholz at Bergstr. 1 (Mon–Fri 9am–6.30pm, Sat 11am–4pm, Sun 10.30am–6pm). 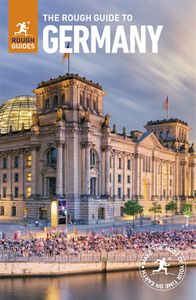